The buzzy new documentary The Inventor, on failed and fraudulent medical tech start-up Theranos and its polarizing founder Elizabeth Holmes, came out on this week on HBO — and although there’s plenty of the actual story to raise eyebrows, it’s a side character who appeared in the documentary that’s generating his own fair share of attention online.

The man in question is investor Tim Draper, a noted venture capitalist who reportedly put $500,000 in to Theranos during the company’s early stages through the venture capital firm DFJ, of which he is a founder. (Holmes would go on to raise $1.4 billion over 10 funding rounds, according to Crunchbase.) Apparently Draper loves this fashion statement; cryptocurrency blogs point out that he’s been seen wearing his bitcoin neckwear on TV before, and even rocked it onstage at the Web Summit conference in Portugal this fall, making it something of a signature by now. He is an advocate for cryptocurrency, with early successes using viral marketing to grow companies like Hotmail and Skype, according to his company profile. He also founded the self-titled Draper University of Heroes, “a residential and online school to help extraordinary young people meet their entrepreneurial goals.”

This documentary is not the first deep look into Holmes’s story; she was brought to task by investigative reporter John Carreyrou’s work in the Wall Street Journal, and further explored in his book Bad Blood. But it is the first time we’re paying attention to Draper’s now-infamous fashion choice as part of her associated saga. He’s also gone on record as recently as last May to support Holmes, suggesting she was still a visionary and “great icon” who was unfairly attacked by the media. If you are moved to emulate Draper’s look, the tie is available for purchase online for $44.30. Knowing you are echoing the style of an internet-famous venture capitalist with a dubious take on Theranos? Priceless.

This is also not the first time a secondary interviewee in a documentary has gone viral of late. Just this winter, the Netflix documentary Fyre featured event producer Andy King who became internet-famous for his surprising comments. 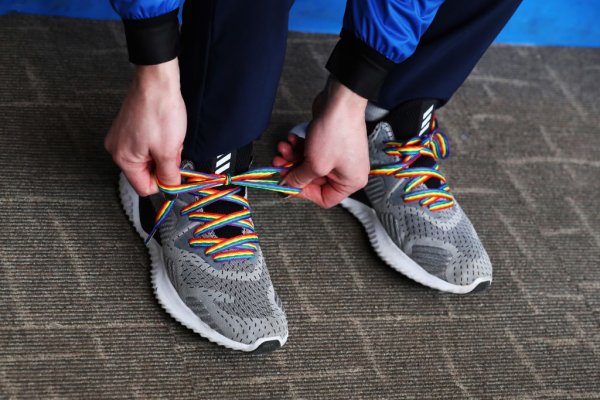 Video of Extreme Shoe Tying Is Blowing a Lot of Minds
Next Up: Editor's Pick