With 10th Medal, Allyson Felix Is Now The Most Decorated Female Track-and-Field Olympian Ever

They were watching the race from the family room at Allyson Felix’s parents’ home in Los Angeles: Felix’s husband Kenny Ferguson, 2-year-old daughter Camryn, brother Wes, mother Marlean, dad Paul, and two cousins, Lee Williams and Brandi Wilson. This 400-m sprint in Tokyo would be the final individual Olympic event of her storied career: another Olympic medal would give Felix 10, the most ever for a female track-and-field athlete. It was 5:30 a.m. Friday morning in Southern California, still dark out.

Right before the race, Kenny had woken up Camryn. From dad’s lap, she watched mom push herself to a bronze medal with some grogginess in her eyes. “I was surprised she was awake,” Felix said afterward. “She should have been asleep. We’ll deal with that later.”

As the family started celebrating, however, Camryn began to snap out of her slumber. She said she wanted to go see her mother at the track. As Felix stood on the medals podium, smiling through her white mask, Camryn said she wanted to wear a mask too.

Overwhelming pride filled that family room as Felix finished third, winning bronze. So many Americans felt it too, as Felix was running for so much more than a medal. Besides her sustained excellence on the track, though her experiences off it Felix has emerged as an inspiration and advocate, fighting for the rights of working mothers in sports, and for better maternal health care protections from women of color. Over the past few years, she’s also fought self-doubt to return to the Olympic podium after Camryn’s difficult premature birth threatened Felix’s life.

READ MORE: Motherhood Could Have Cost Olympian Allyson Felix. She Wouldn’t Let It

“She’s more than we ever could have imagined,” six-time Olympic medalist Jackie Joyner-Kersee—whose husband Bobby Kersee coaches Felix—tells TIME from her St. Louis home at 4:50 a.m. on Friday; she was up early to watch the final. “From the very first day she stepped on the track, and now as she steps off the track, her journey will continue to inspire young girls and young women alike to be the very best of themselves.”

At the Olympics, individual races have caused Felix heartbreak. In Athens in 2004, at age 18, she sobbed after finishing second in the 200-m. Another silver in Beijing felt devastating. She finally won 200-m gold in London, but in the 400-m in Rio, Felix was again the runner up; Shauae Miller-Uido of the Bahamas dove across the finish line to eke out the win. (Miller-Uido of the Bahamas defended her Olympic title here in Tokyo, winning the race in 48.36 seconds. Marileidy Paulino of the Dominican Republic took silver with a time of 49.20 seconds and Felix finished with a time of 49.46 seconds; Stephenie Ann McPherson of Jamaica finished fourth, in 49.61 seconds.)

This time, given her comeback story, the hardware in Tokyo felt almost golden. “It’s really hard for me, when I don’t win, to still have joy,” says Felix. “Tonight I have joy.”

Felix waved her hands when she was introduced before the race at the Olympic Stadium: she slapped her thighs before taking her starting spot in the outside lane. She kicked her left leg up, then her right leg. Her start was quick, but at one point, she sat in fourth place near the turn. But she caught McPherson and held her off down the straightaway; Felix seemed to almost smile as she crossed the finish.

She lay on the track, looking upwards, hand covering her face, as if she didn’t want to leave the track after her fifth Olympics. She said a combination of emotion and fatigue caused her to lay out. “The 400,” says Felix, “It just does it to you.”

Allyson Felix of Team USA reacts after winning the bronze medal in the Women's 400m Final on day fourteen of the Tokyo 2020 Olympic Games at Olympic Stadium on Aug. 06, 2021 in Tokyo, Japan.
Richard Heathcote—Getty Images

Felix should have another opportunity to medal here at the Tokyo Summer Olympic Games and break Lewis’ American record; she’s set to participate in the 4×400-m relay final on Saturday, a race the U.S. has won at every Olympics since the 1996 Atlanta Games.

Running for more than medals

Felix’s record is even more remarkable given all the unexpected adversity she’s faced since the 2016 Rio Games, when she lost on Miller-Uido’s dive. (“I wouldn’t want to win that way,” Felix told TIME in a May interview. “In my opinion, it’s not respectable.”) In late November 2018, Felix gave birth to her daughter, Camryn, seven weeks premature: she was diagnosed with severe preeclampsia—a potentially life-threatening, pregnancy-related condition more prevalent in African-American women, and required emergency C-section surgery.

Both mother and daughter, however, recovered, and Felix has turned her attention towards raising awareness for African-American maternal care. “We need to provide women of color with more support during their pregnancies,” Felix told the House Ways and Means Committee in 2019. “Research shows that racial bias in our maternal health care system includes things like providers spending less time with Black mothers, underestimating the pain of their Black patients, ignoring symptoms and dismissing complaints.”

When she returned to the track for training, some 10 weeks after giving birth, simple exercises caused her pain, due to the surgery. At the same time, Felix was embroiled in a contract dispute with Nike, her primary sponsor for over a decade, over a clause that would tie performance protections for athletes to pregnancy. In May of 2019, she went public with her story. Felix left Nike and signed with Athleta in July of 2019, becoming the female-focused brand’s first sponsored athlete. That August, Nike announced that the company would guarantee athlete pay and bonuses for 18 months around pregnancy.

“I’ve heard from what seems like thousands of [mothers],” said Felix following her semifinal heat in Tokyo. “All the different situations and scenarios. All that they’ve been through. There are a lot of similarities. I just want to be that representation.”

In June, Felix launched her own footwear and apparel company, called Saysh, becoming the rare athlete to take a bet on herself when it comes to sponsorship. She won her 400-m Olympic bronze while wearing Saysh spikes.

Read more: Allyson Felix Launches Her Own Show Company Two Years After Breaking Up With Nike

Families were not permitted to travel with athletes to Tokyo; these restrictions were particularly difficult for mothers of young children. “Already getting my mind right for being away from Cammy for 16 days,” Felix wrote in a July 9 text message, two weeks before the Tokyo Opening Ceremonies. “But I’ll make it through.” Once she arrived in Tokyo, Felix found the separation difficult. “It’s been a lonely Olympics,” Felix told TIME earlier this week. “The biggest down for me, and it’s probably the most expected one, is being apart from Cammy. I’ve had a few moments just talking about that with other moms. There are just moments of sadness.”

Here in Tokyo, she’s been FaceTiming often with her daughter back in Los Angeles. “That’s been the high point of my day, catching up with Cammy,” Felix tells TIME. “I think this is the first time that she does understand that I’m gone. She sometimes becomes frustrated in the FaceTime that she can’t get to me.”

One high point in Tokyo, Felix says: after she was having trouble sleeping when she first arrived and being bothered by neck pain and back pain on the cardboard beds in the Olympics village, she ordered an extra mattress from Amazon in Japan. She found some extra cardboard to build herself a full-size bed: sleep got better, and the pain dissipated.

Felix solidifies her place in history

Still, Felix fought through isolation and homesickness, at 35, in her final Games, to break the track-and-field medals record. “We all now know the complications I’ve faced the last couple of years,” says Felix. “The physical complications, along with all the hardships. I think that’s what gave me the most doubt. Could I ever get back to myself? To me, tonight was really special because I do feel like myself again.”

Even before breaking the track-and-field medals record for women, Felix was one of the most influential Olympians here in Tokyo. Capping her career with an individual bronze medal, after many track prognosticators wondered if she’d even make the U.S. team, will offer her an even bigger platform.

“I think her legacy is kind of showing everyone you can do what you want to do,” says U.S. sprinter Gabby Thomas, who won silver in the 4×100-m relay, and bronze in the 200 m, in Tokyo. Thomas’ mother steered her into sprinting after watching Felix race in Beijing. “She’s had such a long career. She hasn’t let anything stop her, whether it’d be her age, the number of races she’s running, who’s running next to her, who may be testing positive. She never let any of that get to her. Even now being a mother… so just her grace, her poise, her commitment to excellence has been such an inspiration.”

And now, with more track-and-field medals than any woman in history, Felix stands alone. 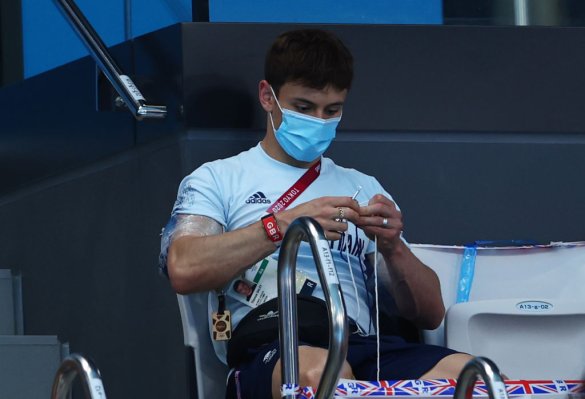 Tom Daley Has Unveiled His Olympic Knitting Masterpiece
Next Up: Editor's Pick