Athing Mu Wins Gold in 800 Meters at the Tokyo Olympics, the First U.S. Woman to Win the Race Since 1968

Athing Mu of Team United States reacts after winning the gold medal in the Women's 800m Final on day eleven of the Tokyo 2020 Olympic Games at Olympic Stadium on August 03, 2021 in Tokyo, Japan.
David Ramos—Getty Images
By Sean Gregory/Tokyo

After the race was all over for Athing Mu, the distance-running phenom who on Tuesday became the first U.S. woman since 1968 to win the 800-m gold medal at the Olympics, she seemed so relaxed, so nonplussed, she might as well have won some junior track meet. Which she wasn’t doing all that long ago: Mu’s 19.

And Mu promises she has more in store. Only one athlete, Cuba’s Alberto Juantorena, has ever won both the 400-m and 800-m in the Olympics; he earned gold in both at the 1976 Montreal Games. “We were talking about this earlier in the year, my coach and I, running the 4-8 double,” she says. “Most definitely. We’re going to put my name on the list of the two people that have accomplished that. Because I want to do it.” She’ll throw in a 800-m world record to boot. “We’re going to break it,” she said.

American track and field, the sprints tend to steal most of the attention. It’s now time to give middle-distance its due, thanks to an easygoing teen running prodigy. At the Olympic Stadium in Tokyo on Tuesday Mu won gold in 1 minute, 55:21 seconds, setting a new American record. It bested Keely Hodgkinson of Great Britain, who clocked a 1:55:88 to win the silver, and fellow Team USA’s Raevyn Rogers, who ran 1:56:81 for bronze.

Mu moved ahead early and never looked back. “At the end of the day, I don’t want to leave anything to chance,” Mu says. “If I wanted to run a fast time, I’m not going to stick with the pack.”

Mu has raised golden expectations for his race all year. Before she turned professional in June, signing with Nike, Mu was a freshman phenom at Texas A&M; keeping track of her collegiate records—800 m, 400 m, 600 m indoors, likely missing a few—was no easy task. She credits the weightlifting regiment in college for helping her performance. “Never, never, never had been in the weight room before college,” Mu says. At the U.S. Olympic Trials, Mu ran the world’s fastest time of the year, 1:56:07, a mark she topped at the Tokyo Summer Olympic Games.

“Regardless of whether people have expectations of me, I know at the end of the day it’s not affecting anyone but myself,” Mu told TIME in an interview before the Olympics. “Just knowing that brings me peace.”

In the final, she ran with a hair barrette that said “Confident.” She picked it up in Los Angeles the day before she flew to Tokyo. “Went to Nordstrum, and I was like, oooh. I. Like. That.”

Mu’s performance highlighted a busy night of medals at the Olympic Stadium. Sweden’s Armand Duplantis, the pole-vault world record holder, won gold in that event; Anita Wlodarczyk of Poland won the women’s hammer throw. In the other marquee event of the evening, the women’s 200 m, Elaine Thompson-Herah became the first woman in history to win the 100-200m “double double” at successive Olympics. (She took the 100-m on Saturday). Thompson’s time, 21.53 seconds, is the second-fastest in history, trailing only Florence-Griffith Joyner’s record time of 21.34 seconds, set at the 1988 Games in Seoul.

Christine Mboma, from Namibia, won silver in 21.81 seconds to set another under-20 record. Mboma’s participation in the race came with some controversy; under a ruling that stemmed from the case of 800-m South African sprinter Caster Semenya—who has a condition called difference-of-sex development, or DSD, which produces high natural testosterone levels—Mboma could not run her primary event, the 400-m, at the Olympics. But Mboma was eligible for the 200-m.

READ MORE: Motherhood Could Have Cost Olympian Allyson Felix. She Wouldn’t Let It

American Gabby Thomas, who coming into the race had run the second-fastest time 200-m in history at this year’s U.S. Olympic trials, finished with a bronze. The Harvard grad and neurobiology major, who’s now pursuing an epidemiology master’s degree, has an irresistible story. She somehow balanced training for the Olympics and the rigors of grad school, at the University of Texas. The struggles of her twin brother, whom Douglas has said has ADHD and has required neurofeedback therapy, and a younger brother, who has autism, inspired her to pursue neurobiology. A Harvard class on health disparities in the African-American community sparked her interest in public health.

At just 24, she has plenty more to give on the track. And she’s primed to make a difference in the world. She’ll soon head back to UT. “I need to finish registering for classes, like ASAP,” Thomas says. She says she’ll be taking a health economics course. “I have to get a couple of my core classes out of the way,” says Thomas. “But after that, I’ll be able to take some fun electives on health disparities and the things I’m really passionate about.”

While Thomas was running her 200 m, Mu yelled “Go Gabby!” from the broadcast area, where she was doing her gold medal interviews. “She has so much grace,” Thomas says of Mu. “So much poise. So much composure at such a young age. An amazing teammate. She’s an inspiration to me.”

Mu’s the pride of Trenton, N.J., and the daughter of South Sudanese immigrants—her last name is pronounced “Moe.” From the time she started running when she was in grade school, Mu stood out. “She never said no to any workout I gave her,” says Bernice Mitchell, one of Mu’s coaches at the Trenton Track Club. Most little kids want to sprint. “The funny thing is, she didn’t,” says Mitchell. “She didn’t like shorter races.”

For Mu, distance offered more payoff. “The shorter events like the 100 m, I’m just like, I don’t want to do that,” says Mu. “Because I’m doing all this work just to run 10 seconds on the track, and that’s it. I didn’t think I could reach my full potential doing that.”

Going into Tokyo, Mu told TIME, she’d often think about herself on the medal stand. “I’m definitely visualizing it,” she says. “I think visualizing it is going to make it happen.”

How prophetic. “This is just the beginning,” says Mu. “One thing I will say, for those people watching me for the first time, even for the people who have been watching me the last couple of years … my time is now. So, that’s what they can take away from this event, and watching anything in the future. I’m going to remain with that statement. My time is now.” 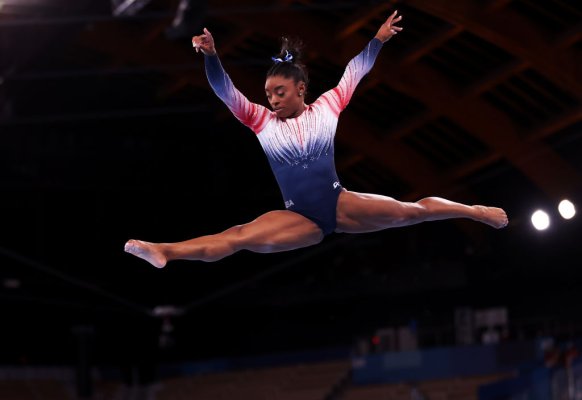 Simone Biles Is Back
Next Up: Editor's Pick