Sydney McLaughlin Just Won the 400-m Hurdles. Remember Her Name. You'll Be Hearing a Lot of It

Before American Sydney McLaughlin broke the world record in the 400-m hurdles Wednesday morning in Tokyo, she tried to simplify her approach. She stayed off social media, where as a high school student McLaughlin was the target of online harassment. She remained in her room—which isn’t difficult here in Tokyo, where strict COVID-19 protocols are still in place. She only spoke to family and friends.

Pressure, says McLaughlin, “is a weight that you put on yourself that doesn’t really exist. It’s the fear of something that hasn’t happened yet.” Pressure is just an “illusion.”

It sure looked that way on Wednesday. With a burden on McLaughlin to carry her sport into the future, she delivered a thrilling finish to remember. She tracked down teammate Dalilah Muhammad, the defending Olympic and world champion in the final 40-m sprint to break her own record and win Olympic gold. She finished with a time of 51.46 seconds. At 21, she’s the youngest gold medal winner in history of the 400-m hurdles. Muhammad’s second-place time, 51.58 seconds, is now second-fastest time in history. Femke Bol of the Netherlands took the bronze medal; her time, 52.03 seconds, now stands as the new European record.

According to Olympic officials, McLaughlin won the 1,000th medal ever awarded Olympic track and field, dating back to 1896.

McLaughlin and Muhammad refuse to call themselves rivals. Their duels, however, are now must-see events—especially after their Olympic showdown, which aired in prime-time Tuesday night on U.S. East Coast, more than lived up to the hype. They’ve compelled each other to break new barriers. “It’s really just sharpening irons,” says McLlaughlin. “You need somebody who’s going to push you to be your best. That’s what we do so well. Every time we step on the track, it’s always something fast.”

Muhammad led from the outset, and even came out of the 10th and final hurdle with a slight lead. But she wasn’t happy with her final jump, and it likely cost her. “I just was coming at it fast,” she says. “I either could have went left leg or could have went right leg, and I chose to go right leg and had to shorten my stride to do so.”

So now McLaughlin had an opening. When she crossed the finish line, she knew she had won gold. While Warholm screamed after setting his historic mark, McLaughlin sat on the track, almost stoic. “It’s just a flood of emotions that you don’t know how to process,” she says. “I was just really grateful to be able to finish the race, to be here on this stage, to have the opportunity. Too many emotions that you have no emotions.”

Some friends had less muted reactions. “F—ing awesome,” Mike McCabe, McLaughlin’s coach at Union Catholic Regional High School in Scotch Plains, N.J., tells TIME after the race. “The way she chased down Muhammad at the end … she really had to dig deep.”

“Oh my, the execution of that race,” Jackie Joyner-Kersee, the six-time Olympic medalist, says via telephone from Germany, where she was watching at 4:30 a.m local time. About a year ago, McLaughlin started working with Joyer-Kersee’s husband, Bobby Kersee, an accomplished track and field coach. “Muhammad was gone, but Sydney showed how not to panic and execute the plan,” says Joyner-Kersee. “When everyone is in front of you, it’s easy to panic. Sydney had to smooth on that last hurdle. If she wasn’t, Dalilah would have had it.”

McLaughlin even had a vocal trackside fan in the stands, a rare occurrence at these spectator-free Games. Sean Dorcellus, a production runner at NBC Sports who’s been friends with McLaughlin since their freshman year at Union Catholic, sat near the finish line. ”Let’s so Syd!” he shouted. He held up a sign that read “Syd’s Time Is Now.”

“This was always her destiny,” Dorcellus tells TIME after McLaughlin’s victory. “She did everything the right way from the very beginning.” Dorcelles caught himself before growing emotional. “Oh man, it’s crazy. She’s probably my biggest inspiration,” he adds.

McLaughlin, who turns 22 on Saturday, already has sponsorship deals with New Balance, Tag Heuer, Gatorade and Beats by Dre. With her performance in Tokyo, she’s primed to become one of the new crossover stars of the Olympics—a name familiar to the American public outside the somewhat cloistered world of track and field.

Track experts have been expecting this moment since Rio, when McLaughlin became the youngest U.S. track and field athlete to compete at the Games since 1972. (She said she’s suffered a post-Olympics letdown after those Games; she failed to make the final). She’s also the only person to even be named Gatorade High School Athlete of the Year twice.

In choosing Bobby Kersee as her new coach, McLaughlin became training partners with Allyson Felix, a long-time Kersee pupil. “Sydney McLaughlin possesses a quiet confidence that demands your attention,” Felix wrote about McLaughlin for this year’s issue of TIME 100 Next. She’s now poised to succeed Felix as the “face” of American track and field. “It’s really important and it’s really cool to be a part of this new wave,” McLaughlin said before the Tokyo opening ceremonies. “It’s kind of pushing the boundaries of what’s possible.”

Joyner-Kersee, bleary-eyed but proud, knows McLaughlin is ready. “She’s young, she’s humble, she’s fierce,” she says. “She will continue to bring the sport to a whole other level.” 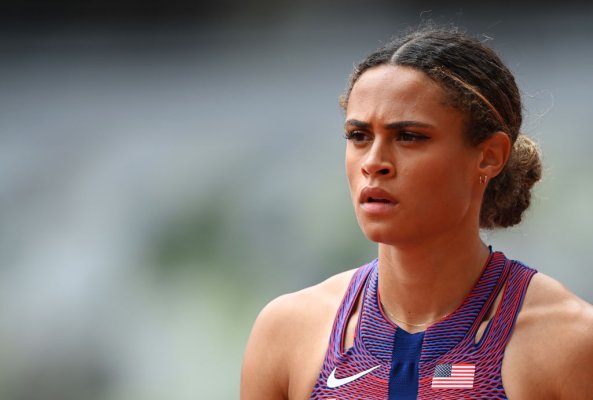 Sydney McLaughlin Is the 400-m Hurdles World Record Holder. But Her Journey Is Just Beginning
Next Up: Editor's Pick