How the Tokyo Olympics Changed the Conversation About Athletes' Mental Health

Even before Simone Biles threw the Olympics off its axis, Jessica Bartley knew mental health issues were weighing heavily on the athletes in Tokyo. Bartley, a psychologist and the director of mental health services for the U.S. Olympic and Paralympic Committee, says her team received about 10 requests daily during the Games to support athletes’ mental health needs.

Most of the calls did not come directly from athletes, but from “a tip from someone around the athlete, who alerted us to a situation,” she says. These requests involved everything from struggles while in quarantine due to COVID-19 protocols, to receiving unexpected news from back home, to not performing as anticipated at the Games. Of the requests that Bartley’s mental health team received, there were a handful of cases that indicated a potentially more serious issue, so Bartley or a member of her team immediately called the athlete and inquired about their mental state to determine if they needed additional mental health support, and to ensure they were in touch with their regular support team from home if they had one. If they didn’t have one, Bartley was ready to connect them with resources to help.

“The Games are really an incredible opportunity to start to have those conversations,” says Bartley, whose group is the first to travel with Team USA specifically to support the mental well-being of athletes. The Tokyo Olympics, taking place amid a pandemic that has had a massive impact on global mental health, was always going to present additional challenges for the competitors. But once Biles pulled out of the women’s gymnastics team event to focus on her mental health and physical safety, the issue became a defining theme of the Games. And her courageous choice, amplified by the global spotlight of the Games, created a rare opportunity for moving the discussion from raising awareness to positive action.

In Tokyo, Biles’ fellow Olympians recognized the gravity of the moment. “With everything that Simone has gone through, I’m really proud of her and the way she is standing up for herself but also making things better for others and bringing a lot to the forefront of these conversations,” says Allyson Felix, who became America’s most decorated track and field Olympian ever when she won her 11th career medal in Tokyo.

Throughout the Olympic Village, athletes supported Biles—and recognized some of their own struggles in hers. “I know what it’s like to have severe mental health issues,” says Kate Nye, a U.S. weightlifter who earned silver in Tokyo. “As someone with bipolar disorder and ADHD, I could definitely relate to the overwhelming nature of sport. I’m of the opinion that you have to put yourself first. She should have done what was best for her, and she did.”

“To be able to overcome your own ego and step aside, that’s huge,” says Alex Bowen, a member of Team USA’s men’s water polo team, of Biles’ decision. “That’s a mental marvel. It’s something we all try hopefully to do all the time, but I don’t think many people can do that.”

Biles certainly isn’t the first athlete to experience the crushing pressure that comes from being an Olympic favorite, nor the first to open up about struggles with mental health. Michael Phelps, the most decorated Olympic athlete in history, has been candid about his struggles with depression. Like Biles, Phelps bore the weight of a nation as the face of an entire Olympics—unique pressures he detailed in a 2020 documentary The Weight of Gold. And leading up to the Olympics, tennis star Naomi Osaka withdrew from the French Open and skipped Wimbledon in an act of self-protection and mental preservation.

For Olympians, the burden of expectation can be particularly debilitating. Not only is their performance the culmination of four years of training, sacrifice and emotional and physical struggle, but the personal stakes are amplified exponentially by having their individual success held up as the symbol of a nation’s hopes and expectations. “People have no idea what is going on behind the scenes, and just judge us from our social media,” Biles said. “You guys have no idea what we are going through.”

“We are still human,” says Nye. “It’s hard for some people to understand because they just see us through their computer or TV screens.”

Japanese gymnast Mai Murakami, who tied for bronze in the floor exercise event final, broke down in tears when talking to reporters about her journey to the podium. The Japanese public has been sharply divided over the Olympics, with many feeling strongly that the government and Olympic organizers should have canceled the Games in light of the pandemic, and that holding the Games is putting the Japanese populace at risk. That criticism has created an added level of pressure on Japanese athletes competing in Tokyo, and they have become the target of vicious social media comments leading up to the Games, which has significantly impacted their mental health. “I know there are people who are against the Olympics,” Murakami said. “But even if I didn’t want to see such comments, they reached me, and it really made me feel terrible. That was really upsetting and sad.”

A moment for mental health discussions

Simone Biles touched a nerve far beyond athletes, releasing a seemingly pent-up reservoir in the broader culture. Data from NewsWhip, a data analytics company that measures the impact of media reports, showed that coverage of Biles’ decision to withdraw generated more social interactions than Meghan Markle and Prince Harry’s interview with Oprah Winfrey or Osaka’s withdrawal from the French Open. Google searches related to mental health on the day Biles pulled out hit their highest peak in two months.

Simone Biles of Team USA looks on as she warms up prior to the Women's Balance Beam Final at the Tokyo 2020 Olympic Games at Ariake Gymnastics Centre on Aug. 03, 2021 in Tokyo, Japan.
Laurence Griffiths—Getty Images

Why is that? What is it about this moment that has allowed something many have been talking about for a while to finally break through?

There are generational factors, and situational ones, experts say. Dr. Joshua Gordon, director of the National Institute of Mental Health, says there’s no denying that COVID-19 has pushed mental health front and center in a way it wasn’t before. The question is whether that heightened attention is making it easier for people to share and acknowledge mental health struggles. “We know the pandemic increased the demand for conversations around mental health,” he says. “Did it accelerate the trajectory toward acceptance of mental illness? My own personal opinion is that it likely did.”

Read more: ‘I Am Not Defined By Being an Olympic Bronze Medalist.’ Noah Lyles Has an Important Message on Mental Health

Another force fueling the increased focus on mental health among Olympians is generational. In general, research shows that mental health issues are most likely to affect people during their teens and young adulthood. That’s not surprising, given the dramatic social changes occurring at that point in people’s lives; people are leaving the comfort and support of their home and striking out on their own in college or the workforce for the first time. “It’s a time of great change biologically as well as psychologically,” says Gordon. “We know it’s a vulnerable period.” About 30% of people aged 18 to 25 years report having a diagnosis of a mental illness in the preceding year, which means this age group already represents a higher risk group.

Add to that the additional pressure that high-level athletes competing at the Olympics feel in shouldering not only their own expectations but also those of their family, coaches and country, and it’s not surprising that so many Olympians struggle with mental health issues. “Different people have different levels of risk and resilience against mental health issues in general, but for those who have other risk factors for mental illness, stressful situations can precipitate episodes of symptoms,” says Gordon.

Even more concerning, the impact of mental health issues can be graver in this age group than in any other; suicide is the second leading cause of death among those aged 10 to 34. More young people are also visiting the emergency room for mental health conditions, and also turning to crisis intervention services like hotlines or online therapy. But whether this represents a baseline increase in rates of mental health issues in this group, or a greater willingness of younger people to admit and seek help for mental health problems, breaking the decades-old stigma associated with doing so, isn’t quite clear yet.

For the American athletes that Bartley and her team worked with at the Olympics, Biles and Osaka are helping to create a new path—one that can value results and medals but doesn’t put them above all else. This path, Bartley and other mental health experts say, may leave fewer mental scars and go a long way toward ensuring that more athletes at the elite level have longer and healthier careers than before. “One of the most important coping mechanisms is giving yourself permission to take time off and to take a break and care for yourself,” says Gordon.

But we’re still far from that becoming the norm. Few athletes feel able to take a step back without risking their place on the team or a deal with a sponsor. Biles herself pointed out that the attention is welcome but long overdue. “I definitely think it’s a little late in the game to have this conversation,” she said. “I expect it to be at the forefront a little bit more because I think athletes kind of suppress their emotions and how they are feeling. At the end of the day, we are not just entertainment, we are humans.”

—With reporting by Sean Gregory/Tokyo 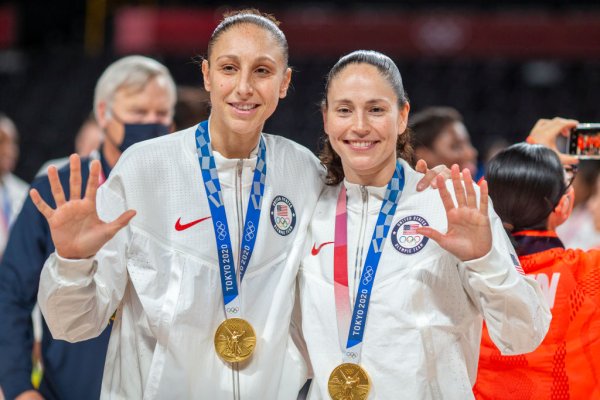