‘I Am Not Defined By Being an Olympic Bronze Medalist.' Noah Lyles Has an Important Message on Mental Health

“Boring,” Noah Lyles said after the 200-m final in Tokyo, when asked how it felt to be a bronze medalist.

However, Lyles’ post-race message was anything but boring. It may be more valuable than any medal.

As the defending world champion in the 200-m sprint, Lyles entered the Tokyo Olympics as the favorite to become the first American since 2004 to win the event at the Olympics; Usain Bolt had taken three-straight golds in the race. Lyles, however, finished third on Wednesday, behind Andre de Grasse of Canada and fellow American Kenneth Bednarek. He had guaranteed gold coming into these Olympics. He did nothing to hide his disappointment. “I didn’t win,” Lyles said. “Everybody wants to win when they come [to the Olympics], right?”

His post-race huddle with reporters started out in standard fashion: Lyles said he wanted to get back to work and find new techniques to improve his time. He wanted to look forward to the promise ahead. Then the conversation took a turn, as Lyles started began discussing mental health.

Lyles, 24, has been open about the struggles he has faced. He’s been seeing therapists since he was a kid. Last summer, he shared on Twitter that he was taking antidepressants. He then stopped taking medication a few months before this year’s Olympic trials; he thought they were leaving him with too little energy to compete. “Mentally, getting on and off the antidepressants, it was really hard,” said Lyles. Right before flying to Tokyo, Lyles said he broke down crying. “Me and my girlfriend were talking, we were talking about …” Lyles took a deep breath. “We were talking about … ” He paused again. “We were talking about how hard it was to get through this year.”

Lyles said he and his girlfriend discussed Lyles’ younger brother, Josephus. While watching the Opening Ceremony of the 2012 London Olympics, Noah and Josephus made a plan to run together at the 2016 Rio Games. Josephus got injured before the U.S. Track and Field Olympic Trials in 2016, and Noah finished fourth in the 200-m final, narrowly missing the team. Noah went on to win the 200-m world championship in 2019; Josephus competed at the trials this year, but did not make the 200-m final. “It’s been really hard for him,” Noah said. “Watching him train as hard as he has.”

He paused again, and began to let his emotions go. “I’m sorry,” he said, even though he didn’t have to apologize. “I thank God every day I am able to come out here, because at the same time, I feel like this wasn’t even my dream. In 2012, my brother had the dream that he was going to come to the Olympics,” Lyles said, now speaking through tears. “I really just tagged along for the ride. And sometimes I think to myself that, you know, this should be him.”

“I just really tagged along because I loved my brother,” said Lyles, crying. “And I wanted to do this together. And it’s taken us so far, and I’m just like, you should be here.”

He again apologized. A track-and-field rep tried to end the session.

“I want to finish this,” Lyles said.

More than any sporting event, perhaps ever, these Olympics have brought the subject of mental health to the forefront. The Games provide enough pressure on their own; miss your moment, wait—and work—another four years. Add in the uncertainty of whether these postponed Olympics were going to even occur during the COVID-19 pandemic, the inability of family and friends to be here in Tokyo, and restrictions on movement and social activities during what is typically a global celebration, and it’s no wonder so many athletes have had trouble coping.

When Simone Biles dropped out of the team and individual all-around competitions last week to tend to her mental health, she brought an intense amount of attention to the issue. Lyles, another athlete heavily promoted by NBC and other media outlets coming into the Olympics, kept the conversation going Wednesday night.

“Somebody asked me why I told people on Twitter that I was on antidepressants,” said Lyles. “It was strictly for the idea that I had taken something, and it made me feel better. And I knew there was a lot of people like me who were too scared to say something or even start that journey. And I wanted them to know that if you see me in a big light, I want you to know that it’s O.K. to not feel good. And you can go out and talk to somebody professionally, or even get on medication. Because this is a serious issue. You don’t want to wake up one day and just think, I don’t want to be here anymore.”

People have told Lyles that his story has compelled them to seek help. “That’s all I can really ask for,” he said. Lyles hopes the focus on mental health doesn’t become a fad that fades after the Olympics. He’s reminding himself about the positives. “I’ve been in almost every magazine that I’ve wanted to,” he said. “And shoot, I’m going to the Met Gala.”

He didn’t want depression to drive him from his sport. “For a while, I wasn’t having fun this year,” he said. “I didn’t want to leave. I had to make a decision. I was like, all right, I’ve got to get better. I can’t let this control me.” He turned to passions like music, art, and fashion. “I am not defined by being an Olympic bronze medalist, or a world champion, or the high schooler that went pro,” said Lyles. “That’s not who I am. I’m Noah Lyles. I’m not Usain Bolt’s successor. I’m not Andre de Grasse’s successor. I’m nobody’s successor. I am me. And that’s who I’ll always be.” 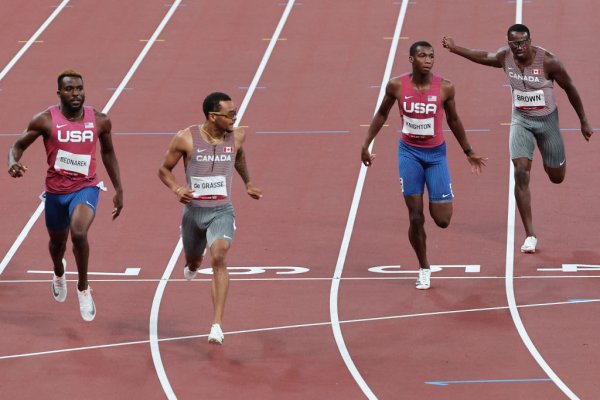