‘This Will 100% Save Somebody’s Life.’ Athletes See a Turning Point for Mental Health After Naomi Osaka Takes a Stand at the French Open

Naomi Osaka of Japan plays a backhand in her First Round match against Patricia Maria Tig of Romania during Day One of the 2021 French Open at Roland Garros on May 30, 2021 in Paris, France.
Julian Finney—Getty Images
By Sean Gregory

After Michael Phelps heard on Monday that Naomi Osaka had pulled out of the French Open, and he read her Instagram message explaining why—Osaka cited “feeling vulnerable and anxious” in Paris, and revealed that she has suffered from “long bouts” of depression since defeating Serena Williams at the 2018 U.S. Open—a bunch of thoughts rushed into his head. Phelps is the greatest swimmer of all-time, winner of 23 Olympic gold medals. But no amount of winning staved off his depression and contemplation of suicide.

Phelps, who has gone public with his struggles and emerged as one of the foremost mental health advocates in sports, could sense that Osaka’s revelations, and decision to forgo a shot at another Grand Slam title to take a mental health break, were a big deal. Osaka is a certified global superstar, the highest-paid female athlete on the planet with a huge social media imprint and endorsements from brands like Nike, Nissan and Louis Vuitton. “I felt very happy after reading her message because she’s showing that vulnerability, she’s showing a side of her that we haven’t seen before, and that’s so powerful,” Phelps tells TIME. “It’s definitely going to be a game-changer in mental health moving forward.”

Former U.S. Olympic swimmer Michael Phelps, pictured in in January 2020, has gone public with his struggles and emerged as one of the foremost mental health advocates in sports.
Olivier Douliery–AFP/Getty Images

He read some of backlash against Osaka, who had announced she was declining to participate in post-match press conferences at Roland Garros, mentioning the potential mental harm of these exchanges with reporters. “I was almost shocked in a way,” says Phelps, “especially with everything I feel like the world has learned about mental health over the last year.” But the next day, Phelps started seeing more articles sympathetic to Osaka. “That does bring a smile to my face,” he says. “Because yes, then we are understanding that this is something that, it doesn’t matter if you’re number one in the world or the average Joe, anybody can go through this. It is real. I hope this is the breaking point of really being able to open up and save more lives.”

That hope isn’t all that outlandish. In recent years, professional athletes like Phelps have helped de-stigmatize conversations surrounding mental health, having shared their struggles with the public and defying shopworn sports conventions to show no signs of vulnerability, to just power through. Phelps was an executive producer on 2020 HBO documentary, Weight of Gold, which explored the mental health struggles that often befall Olympic athletes after the Games. In the NBA, Kevin Love revealed he suffered a panic attack during a game; DeMar DeRozan, another NBA All-Star, shared his battles with depression. In baseball, Zack Greinke spoke up about his social anxiety; NHL player Robin Lehner opened up about his bipolar disorder; gymnast Aly Raisman has been candid about her anxiety.

Through the size of her platform, however, and her decision to choose well-being over pursuit of a Grand Slam title, Osaka offers the promise of bringing mental health awareness—both inside and outside of sports—to an entirely new level. “It’s groundbreaking,” says Lisa Bonta Sumii, a therapist with Galea Health, a company that connects athletes with mental health providers. “She has prioritized mental health, and has said so. And that’s a great example.”

Osaka’s move also marks the latest step in her stunning personal evolution. Few could have imagined that in less than three years, the shy then-20-year-old who apologized to Serena Williams, through tears, after beating her at the 2018 U.S. Open, would find her voice as both a social activist—at last year’s U.S. Open, which she won, Osaka wore masks honoring seven Black Americans killed in recent years—and proponent of mental health. “It goes to show that you don’t have to be this charismatic really extroverted person to be an advocate,” says Bonta Sumii. “She’s said minimal things here. It’s the act. Our behavior can be a form of advocacy.”

Many experts say that when Osaka announced she would not participate in French Open press conferences, she was by no means being “petulant” or a “diva,” as some critics chirped. “To me, this looked like a woman who was setting a boundary and saying I’m not going to put myself in those situations where I’m likely to experience increased risk of harm for my mental health,” says Katherine Tamminen, associate professor of sport psychology at the University of Toronto. In taking this stance, Osaka offers a valuable lesson for anyone experiencing anxiety. “For all of us, it’s important to take a look at these different things going on in our lives and say, you know, here are the things I’m willing to work with, and here’s where I’m not,” says Tamminen.

A common reaction to stories of athlete mental health struggles is puzzlement. How can someone with a career most people envy possible be so stressed? But athlete anxiety is more common than many people realize. According to the British Journal of Sports Medicine, the reported prevalence of mental health symptoms and disorders in elite male athletes in team sports varies from 5% for burnout and alcohol use to 45% for anxiety and depression. Alexi Pappas grew up in the United States and ran for Greece in the 2016 Rio Olympics, setting a national record in the 10K. After achieving her Olympic dream, she fell into a debilitating funk. “I felt that the way the world saw me didn’t match the way that I felt,” says Pappas. “And that’s the most scary feeling in the world.”

Anxiety caused Mardy Fish, a former top-10 U.S. tennis player, to drop out of a U.S. Open match against Roger Federer in 2012. “It’s incredibly naive to think that that someone that just makes a lot of money or is very successful at their career, doesn’t have stress,” says Fish. “Everyone is entitled to their own stresses.”

Phelps, who has had more success than nearly any athlete in history, says winning cannot erase your emotions. “We might be number one in the world and we might be one of the greatest of all time, but we’re human beings,” he says. “We deal and we feel with emotions just like you do. And we go through depression or anxiety or struggle with other things, just like everybody else does. Just because we’re number one in the world doesn’t make us invincible.”

Pappas, who is now partnering with the online therapist directory Monarch, sees Osaka as someone who can help us move away from the win-at-all-costs ethos in sports. “This could be epiphanal,” says Pappas. “It takes a certain type of person, a certain type of energy to be like ‘Oh wow, let’s never go back.’ And we’ve seen that in other things over time, when we’ve never gone back to this, we’ve never gone back to that. And perhaps this is one of those turning points where we only go forward and forgive ourselves.”

Phelps is retired from the pool. But as the Tokyo Olympics approach, with Osaka still the face of the Games for the host country, he’ll be watching from a new perspective. He predicts that Osaka, having spoken her truth, will feel a great sense of relief. And she’ll help others find their truths too. “I know how I struggled, for years, of not wanting to dive into the stuff I was holding onto,” says Phelps. “When I opened up and really started talking about it, I felt freer. This will 100% save somebody’s life. That’s something that’s bigger than we can ever imagine.” 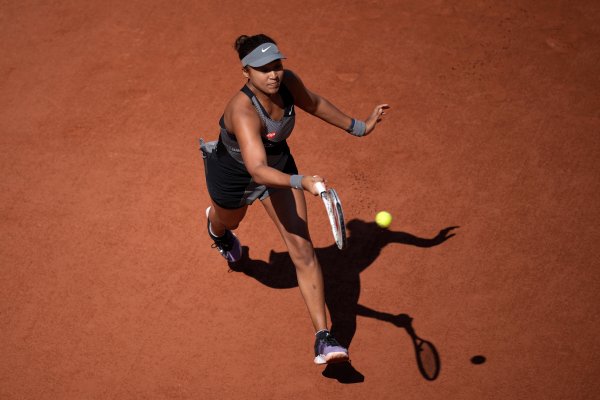