Diana Taurasi #12 of Team USA moves the ball up court against Cayla George #15 of Team Australia during the first half of a Women's Basketball Quarterfinals game on day twelve of the Tokyo 2020 Olympic Games at Saitama Super Arena in Saitama, Japan on August 04, 2021.
Kevin C. Cox—Getty Images
By Amy Gunia

The U.S. women’s basketball team won a decisive victory against Australia in Olympic quarterfinals on Wednesday, continuing a winning streak that has lasted since 1992.

The Australian Opals, who are ranked second in the world after the U.S. by the International Basketball Federation, scored the game’s first basket, but the Americans had a strong start, ending the first quarter with a 14 point lead. The Australians spent the rest of the game trying to catch up, but they went into halftime 21 points behind, before losing by 24 points, 55-79.

Team USA—which faces Serbia on Friday—is a favorite to win gold. The team has won the last six Olympic gold medals and it is seeking a seventh at the Tokyo Summer Olympics. The team has now won 53-straight Olympic games, last losing in 1992 against the Unified Team—which included Russia and other ex-Soviet republics.

Despite its winning streak, Team USA’s wins in Tokyo have been far from comfortable. The team beat Nigeria by only 9 points in the opening game on July 27, and scores have come close in its other games.

American basketball star Sue Bird, the WNBA’s all-time assists leader, attributed the team’s performance so far to a lack of practice with several new players, and the fact that the rest of the world’s teams are getting better.

“I feel like we’ve been telling you guys for years that we’re making it look easy, something that’s really hard,” Bird said Friday, according to ESPN. “Now what you’re seeing is, we told you so, it is hard. That’s not to say we’re not headed in the right direction.”

The Australian Opals headed to the Games without star player Liz Cambage. Cambage, who plays for the WNBA’s Las Vegas Aces, pulled out of the Olympics in mid-July, citing mental health concerns. She said that the thought of entering the Olympic bubble—which requires athletes to isolate from the Japanese public and maintain strict social distancing rules—gave her panic attacks.

Bird and American baseball player Eddy Alvarez—who has combined an Olympic short-track speed skating career with a baseball one—carried the American flag at the Opening Ceremony on July 23. 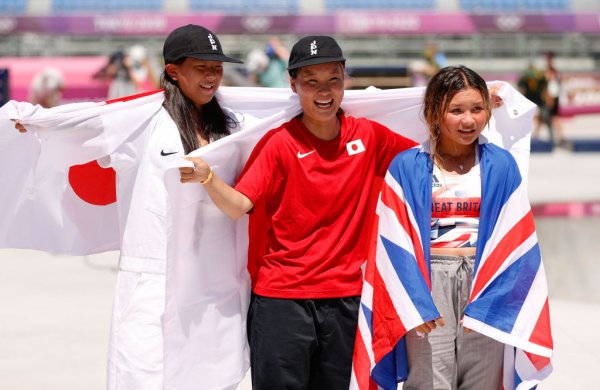 Japan Goes 3-for-3 in Olympic Skateboarding
Next Up: Editor's Pick