When American basketball star Sue Bird was growing up playing hoops in Long Island, New York, she had no WNBA pros to look up to. (The league started in 1997, when Bird was 16). All she had was the Olympics; when the 1996 U.S. women’s team won a gold medal in Atlanta, that seemed like the lone possible pinnacle of her sport.

In Tokyo, Bird will be making her fifth Olympic appearance: she is chasing a fifth gold medal, and winning it would make her and American teammate Diana Taurasi the first basketball players to ever win five basketball golds. “Every time I’m named to an Olympic team, because I’m chill and not screaming from the rooftops that I’ve made the team, people assume I’m not excited,” Bird told TIME in a June interview. She is. “It’s like that 15-year-gold who watched [former U.S. point guard] Jen Azzi and thought, Oh, we look alike, maybe that could be me one day. That’s the one, who on the inside, is getting named to the team. And she’s in disbelief every time.”

On Wednesday morning in the U.S., the Today Show announced that Bird and USA baseball player Eddy Alvarez—who has combined an Olympic short-track speed skating career with a baseball one—will carry the American flag at the Opening Ceremony on Friday, July 23. (Most countries will have a pair of flag bearers this year).

During a phone interview in Tokyo with TIME a few hours after she found out she was chosen, Bird said Taurasi, her former college teammate at the University of Connecticut, shared the news in front of the entire team at a practice. She was floored. “It’s impossible to put in perspective,” she says. “I don’t know if I’ve fully wrapped my head around it.” She informed finaceé, soccer star Megan Rapinoe, about the news. Rapinoe told Bird she was incredibly proud. “Sadly they’re losing 1-0 right now,” she said—Sweden would go on to shock the U.S. women’s soccer team, 3-0, in the Olympic opener.

Michael Phelps was flag bearer for the U.S. at the Rio Opening Ceremony; the last women’s basketball player to take on hat role during a Summer Olympics opening ceremony was Dawn Staley, in Athens in 2004; she’s now the Team USA coach. One of Bird’s fondest Olympic memories is trailing behind Staley, near the front, at those Games. She asked her coach for flag-bearing advice. “Dawn said it’s not as heavy as it looks,” says Bird. “I think I’ll be all right.”

No baseball player has ever carried the U.S. flag in the Opening Ceremony; the sport returned to the Games at the request of Japan, a country with storied baseball history, after being absent in 2012 and 2016.

Read more: ‘Unapologetic and Unafraid.’ Sue Bird Stares Down Olympic Glory in Tokyo and Equity Off the Court

Since the Rio Olympics, the relationship between sports and the American flag has grown, well, complicated. A few weeks after those Games, Colin Kaepernick began sitting, and then kneeling, during the National Anthem to protest police violence, igniting a divisive dialogue in which most Americans took clear sides: people viewed that act, and subsequent sports demonstrations, as either immensely disrespectful or brave expressions of free speech.

The latest controversy between the flag and Olympic sports came at the U.S. Track and Field trials in June, when American hammer thrower Gwen Berry turned away from the flag, on the medals podium, during the playing of the National Anthem. She faced intense criticism, particularly from conservatives, and refused to back down. “I feel like in order for me to respect a song that sings about liberty and justice for us all, I have to actually see that and experience it,” Berry told TIME in July. (Berry won’t be at the Opening Ceremonies; track and field starts on July 30, and because of the pandemic, Berry and other track and field Olympians arrive next week.)

In choosing Bird, the United States Olympic and Paralympic Committee may at least be giving a tacit nod to the appropriateness of political activism in sports. Last summer Bird and her fellow WNBA players rallied around Georgia Senate candidate Raphael Warnock, after an incumbent Republican Senator and Atlanta Dream team co-owner, Kelly Loeffler, criticized the league’s embrace of the Black Lives Matter movement. Bird came up with the idea that players wear “Vote Warnock” T-shirts to raise the Democrat’s profile. Warnock beat Loeffler in a January runoff election, a win that carried enormous consequences, as it ultimately flipped the Senate to the Democrats. Loeffler sold her stake in the WNBA team.

“To be selected to lead the delegation, and lead athletes into the Games, that speaks to a career, a body of work,” Bird tells TIME. “The other side of it is, yeah, there are plenty of things I’ve spoken about. There’s things that I know our team stands for, there are things that a lot of U.S. athletes stand for, and want changed. And we’re also going to represent that, holding that flag.”

Bird publicly revealed she was gay in 2017; she also senses how crucial her selection will be to the LGTBQ community. “The fact that you have an openly gay athletes representing the country, that’s where we are,” says Bird. “Talking about these issues, where it’s racial, LGTBQ issues, putting these things at the forefront. Because that’s what we’re working for, is a better America.”

At her first Olympics in Athens in 2004, Bird was a little-used reserve who spent ample time partying a night club on a docked cruise ship where the team was staying; now, she’s the veteran leader and point guard, the WNBA’s all-time assists leader already with four gold medals, and four WNBA championships, to her name.

Alvarez’s body of work—a combination of speed skating and baseball is just plain wild. Wild enough to make him worthy of opening ceremonies recognition. The son of Cuban immigrants, Alvarez grew up in Miami; he started roller skating at age 5 and turned to the ice a few years later. He was soon known as “Eddy the Jet.” In high school he quit skating for three years to concentrate on baseball. At Salt Lake Community College, he played baseball and trained for short track at the speed skating facility there. But after knee surgery he decided to try to make the 2014 Olympic team roster. He won silver in the 5000-m relay in Sochi.

But he was far from done with baseball: after toiling in the minors for six seasons, Alvarez made his major league debut last year with the Miami Marlins. He’s been back in the minors this season, but an Olympic medal would make him only the third American, following Eddie Egan (boxing and bobsled) and Lauryn Williams (track and field and bobsled), to medal in both the Winter and Summer Olympics.

COVID-19 threatens to overwhelm these Games: at least 70 people accredited for the Olympics have tested positive, including two South African soccer players, a Czech beach volleyball player and an alternate on the American gymnastics team. The pandemic can wipe out a potential once-in-a-lifetime Olympic opportunity in an instant: a positive test prevented American Katie Lou Samuelson, who’s fully vaccinated, from competing in the first-ever Olympic 3-on-3 basketball competition. On Instagram, she wrote that she was “devastated.” Who wouldn’t be?

So much has already gone wrong at these Olympics. But Bird and Alvarez waving the flag at the Opening ceremonies: It’ll be nice to see something so right. 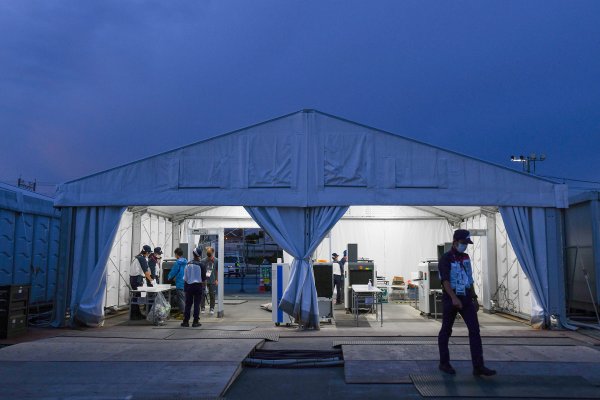 What Happens When an Olympian Tests Positive for COVID-19
Next Up: Editor's Pick