‘No Borders, Boundaries or Limits.’ BTS on Testing Out English Releases and Striving for the Song of the Summer

J-Hope isn’t worried about change. In fact, the 27-year-old member of Korean pop group BTS insists, he and his six bandmates thrive on it.

The change in this case? A move toward more English-language music. “I think it’s interesting to see results from trying out these new things,” he explains to TIME over Zoom with the assistance of a translator, as the others—RM, Suga, Jimin, V, Jung Kook and Jin—nod along. “I started to take more interest, my English improved and it’s actually fun.” V agrees: “It wasn’t an easy process, but the results were good.”

The two singer-dancer-performers are referencing their group’s recent summer songs, “Butter,” released in May, and “Permission to Dance,” their latest from July. Both tracks have been major hits: “Butter” has now notched eight weeks at the number-one spot on the Billboard Hot 100, a personal best for the septet, and was only knocked down after the first seven weeks when they replaced themselves with “Permission to Dance.” (A week later, at the beginning of August, “Butter” is back in the number-one spot.)

Together, the pair of songs helped them break the record for most weeks in the top two slots in Digital Song Sales chart history, and their double-replacement is also historic. These smashes follow their 2020 hit “Dynamite,” also sung primarily in English, which achieved significant radio play and chart success last summer. (That they are chart leaders is a given, but their records bear noting: they boast the quickest accumulation of five Hot 100 No. 1 songs in less than a year since Michael Jackson, and they’re the first artist to dethrone themselves since Drake in 2018.)

Their turn to English has generated debate among fans and critics alike, but it has also proved a failsafe recipe for success. “Dynamite” even garnered them Grammy attention this winter. RM, the de facto leader, is direct in his rebuttal to criticisms from those who have questioned their linguistic evolution. “We have some changes in mind,” he says. “I don’t think it’s bad… In general, with language, topic, there’s no borders, boundaries or limits.” Plus, as he notes, they’ve been in the business for 2013; changes are warranted. “We want to transcend everything, even ourselves,” he says. “Language doesn’t matter that much to us like in the past.”

Indeed, what these songs are—in a nutshell, contenders for songs of the summer—transcends language. “What we call songs of the summer are usually tunes that feel like a cool breeze, easy listening songs,” says Suga. That’s certainly what you will find in this paired release: two lively confections that inspire foot-tapping, regardless of whether listeners require subtitles to understand the lyrics. BTS has an extensive back catalog of albums sung and rapped in Korean and Japanese that focus on a wide range of themes: youth angst, psychology, self-actualization, self-love. The tones of their work also reflect a broad range, from dark and intense to buoyant and celebratory. That they have recently made a mark with these more upbeat tunes is not so much a change in identity as an ongoing expansion of their repertoire and engagement with one particular side of their work.

These songs, says Jin, “share energy and joy with listeners.” It’s fan service, too: “For ‘Permission to Dance’ in particular, we incorporated dance moves that anyone can easily follow,” he says. Those include three International Sign gestures that signify the words “joy,” “dance” and “peace.” (BTS also partnered with YouTube for a special “Permission to Dance” dance challenge, launched on July 23, to help bring even more fans into the fold by making their own 15-second video for YouTube’s new “Shorts” platform, its take on TikTok-style short video.)

BTS is not new at trying to engage fans despite the ongoing limits on travel and live performances; their ticketed virtual performances and candid engagement with followers on platform Weverse have helped them maintain momentum and fan connection despite the lack of touring since they were grounded in the spring of 2020. But that doesn’t mean they aren’t ready to get back to the stadiums they used to frequent. “We’ve grown quite impatient to see our fans in person,” Jung Kook says. Still, they remain coy about their plans going forward and the next era of their music. “If we look on a more distant future, nothing’s decided yet,” says V. Hints Jin: it will be “something new.” In the meantime, the “Permission to Dance” challenge videos are already piling in. Permission to dance has, indeed, been granted. 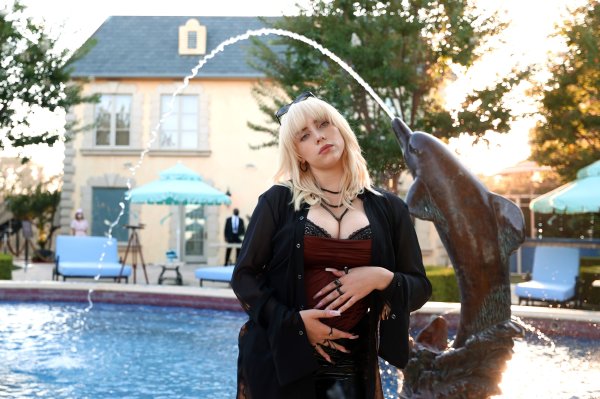 4 Takeaways From Billie Eilish's 'Happier Than Ever'
Next Up: Editor's Pick