Breaking Down Every Track on BTS' New Album Be

Be, the latest comeback from South Korean pop megastars BTS, marks the next era in the seven members’ already historic career. Released Nov. 20, it drops while BTS are already on top, having mastered the charts with this summer’s “Dynamite.” The pandemic may have slowed down touring and live concerts, but, as Be demonstrates, it clearly spurred creativity. At just eight tracks—one of them a spoken skit—and running under 30 minutes, it’s a slim time capsule reflecting the style and mindset of BTS during this strange but, at least for them, successful year.

Here, TIME writers Raisa Bruner and Kat Moon share their reactions to this latest offering from the world’s most powerful musical group.

Kat Moon: As soon as Jung Kook opens with the line, “One day the world stopped without any warning,” it becomes clear that “Life Goes On” is a song for 2020. What struck me the most is how deeply intertwined the title track’s sound and messaging are. The relaxed tempo of the song reflects the sentiment of being fixed in place. “There’s no end in sight. Is there a way out? My feet refuse to move oh,” V sings.

Another auditory element throughout “Life Goes On” intrinsic to the track’s meaning is the emphasis on breathing. “Once winter comes, let’s exhale a warmer breath,” RM raps before a loud exhalation, ha. Beyond that, the song is packed with lines that end with the Korean vowels a (ㅏ, pronounced like “ah”) and eo (ㅓ, pronounced like “uh”). These open-mouthed endings create the effect of members inhaling and exhaling throughout the track. The sound can be interpreted in two ways: sighs that “the world stopped,” or, the likelier option, new breaths taken as BTS embraces “Be”-ing in this new reality. (It’s also worth noting that the opening shot of the “Life Goes On” music video shows V in a mask, sending the message of responsibly covering our faces when we breathe.)

Raisa Bruner: Thank you for bringing up those Korean details, Kat—the little things that a casual listener may not get, but that show BTS’ notable attention to meaning and double-entendre. They promised “Life Goes On” would be, in RM’s words from the pre-release press conference, “a simple message but a profound truth.” It’s warmer and lighter than what BTS is perhaps best known for on the charts; it feels like a cozy sweater, a hug from a friend.

RB: BTS’ life has been marked by an unusual amount of travel, but the pandemic changed all that for them, just like for the rest of us. “Fly To My Room” is what happens when you daydream about hopping on a flight, but do it from the comfort from your home. (Well, sometimes comfort; other times, as they sing, confinement breeds a kind of confusion about our familiar environment.) With only four of the members featured here—Jimin, SUGA, J-Hope and V—it’s a neat balance between rap sections and neo-soul underpinnings. Jimin and V’s falsettos shine here.

KM: I agree, the falsettos were a standout. The first word that came to my mind when listening to “Fly to My Room” was cyclical: the melodic line flows without any major rises or falls, and Jimin and V create a back-and-forth in their verses for the first half of the track. This is not unlike the cyclical feeling of imagining the freedom of traveling but being bound by the walls of one’s room. The instrumentals of the track are also minimalist, echoing the stripped-back sentiment described by V: “This room is all I’ve got” (all translations from @doyou_bangtan unless otherwise indicated). Once again, the music and lyrics mirror each other.

KM: At the global press conference, V—a contributing writer and producer on the song—said “Blue & Grey” is about “expressing the sadness and depression which is usually expressed as blue and grey.” And the ballad is indeed the most emotionally raw number on the album. Similar to “Life Goes On,” breaths are at the core of the melancholic track. But unlike the title track, their sound in “Blue & Grey” is tinged with gloom. V’s opening line, “Someone come and save me, please/ only the sighs of an exhausting day,” sets up the mood of the breaths that follow. Jung Kook inhales audibly before singing, “The meaning of the tears reflected in the mirror, hidden by laughter, are my colors blue grey.” A weighty exhalation is heard before Suga begins to rap, and the repetition of the “h” sound in both Korean and English throughout the ballad only adds to the motif of sighing deeply from exhaustion.

RB: The most poetic—and introspective—track off of Be is this soft ballad, led by V. I particularly like how Suga and J-Hope modulate their rapping to fit the slower, more gentle tone of this song; it’s a tough balance to strike, but they hit it.

RB: BTS used to be known for their skits: off-the-cuff conversational recordings that showed off the guys’ personalities as they spent time together casually. They chose not to include them on the Map of the Soul or Love Yourself albums, but here they returned to these more playful roots. And for good reason: it’s a record of their reactions when they discovered that “Dynamite” had made it to the Billboard Hot 100 top spot, the first and (so far) only Korean act to do so. The news happened to reach them on Jung Kook’s birthday, giving their banter (according to a translation from Genius) an extra kick.

KM: I have nothing to add besides, what an opportunity to hear their joy!

RB: There’s no other way to put it: “Telepathy” is fun. Welcome back to auto-tune and the joys of disco. Suga fronted the production here, on a track that is all about connection, no matter the location. “For a moment, with the useless worries put to rest, for a moment, let’s enjoy it together, the small island in the middle of the blue sea that we reminisce about,” sings Jung Kook. It’s up to us to interpret, of course. So many of BTS’ lyrics call back to prior songs or moments; their universe is complex and self-referential. So when they say “Let’s try matching our speeds/ This is quite a long and enjoyable roller coaster,” they could be throwing it back to past comments about sharing the journey of their rise to fame alongside their fans. I like to think there’s a wink hidden in there, too, though.

KM: The most playful track on the album, “Dis-ease” packs a punch—starting with J-Hope, RM and Suga’s slick rapping after the softer delivery of earlier songs. Comfortably in their element for this hip-hop number, the trio muses about the meaning of “disease.” “Yo, is it me or the world that’s diseased/ Is it simply the difference in interpretations/ Is that all,” Suga asks in his verse. And while brassy instrumentals, bold drums and the slightly jarring noise of record scratching are present throughout the track, a change in tempo transitions “Dis-ease” to its final 30 seconds: a culmination of all these sounds—plus vibrant melodies—in what can best be described as an exhilarating party in the ear.

RB: This sounds like vintage BTS to me; the old-school hip-hop influences like those record scratches give this its punch. It’s also comforting to hear BTS musing about their own perfectionism and dissatisfaction; if even some of the most successful people on the planet feel like they aren’t doing enough, maybe we all need to cut ourselves some slack.

KM: “We are far apart physically, but we always stay together,” Jung Kook, who contributed to writing the track, said at the global press conference. While its message is deeply relatable during the pandemic—“Was it a dream? I thought I saw you/ When I open my eyes, it’s again a room devoid of people,” Jung Kook and Jin sing the wistful words—the sound is not as engaging. I am not a fan of the EDM production, but can imagine “Stay” as a concert banger. Similar to the track “Best of Me” from the Love Yourself albums, this track has an instrumental chorus designed to get a crowd of tens of thousands on its feet.

RB: “Dynamite” is BTS’ first-ever English-language song; they released it this summer as a kind of offering to listeners to bring joy in troubled times. It closes out Be on a bright note. With its fun, retro bounce and celebratory spirit, it’s pretty clear from the get-go why this track managed to reach the top of the charts: just try not to tap your foot to its easy hand-clap beat.

With Be, BTS promised to deliver an album that would give fans what they want: a dose of escapist melodies, thoughtful lyrics and strong personality. BTS is already scheduled for multiple televised performances in the next week, and they’ve made no secret that they’ll be waking up early on Grammy nomination day to see if they managed to snag nods from the powers that be. But the numbers will tell a powerful story no matter what: as usual, BTS has already sold over a million albums in the Korean market, and the music video for “Life Goes On” became YouTube’s global top trending video instantly. Be is short and sweet, and a reminder that the exchange between fans and artists can be deeply fruitful for those who choose to engage in it. 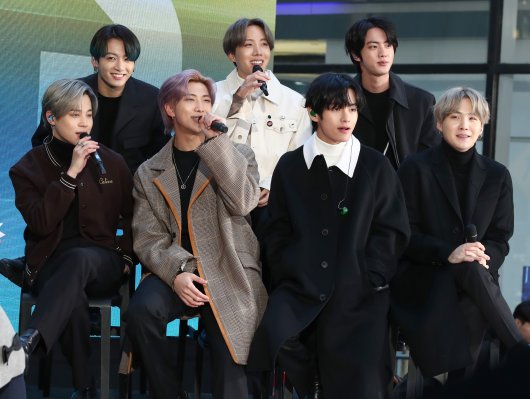 Highlights from BTS' Momentous Year in 2020
Next Up: Editor's Pick