The United States is undeniably the country to beat at the Tokyo Olympics when it comes to women’s gymnastics; the country fielded the last two Olympic champion teams as well as the last four gold medalists in the all-around event. So it’s no surprise that gymnastics commentators say that making the U.S. Olympic team in women’s gymnastics, is, well, probably harder than making the podium at the Games.

The six women who earned that privilege to represent Team USA in Tokyo are Simone Biles, Sunisa Lee, Jordan Chiles and Grace McCallum, who will compete in the team event, as well as Jade Carey and MyKayla Skinner, who will compete in the individual apparatus events. The structure of a four-member team and two specialists is new for the Tokyo Games, per the International Gymnastics Federation (FIG), which added the two individual spots to allow smaller countries that couldn’t field an entire team to still participate.

The women’s team is the most diverse that the U.S. has ever sent to an Olympics, and represents a blend of power and precision that could bring back a fistful of medals and maintain Team USA’s dominance in the sport.

Read more: Simone Biles Is Already the Best Gymnast Ever. She’ll Be Even Better for Tokyo

Biles is the reigning Olympic champion, and she hasn’t lost an all-around competition—which involves competing on all four events of bars, beam, vault and floor—since 2013. She’s coming to Tokyo with new, daring skills that show she is testing the very limits of what is humanly possible when it comes to twisting and flipping in the air. Watch for her explosive Yurchenko double pike vault, which only men have performed at an Olympics, as well as her double-twisting double flip dismount off the beam and stratospheric triple-twisting double flip on floor.

While Biles had uncharacteristic mistakes in her programs on the second night of competition at Trials, her high-scoring skills still kept her head and shoulders above the competition. She’ll be looking to redeem her imperfect beam routine from Rio and increase her score on the uneven bars.

Lee is a two-time national silver medalist in the all-around and a master on the uneven bars. Her routine on that apparatus is likely the most difficult that any gymnast is performing in the world now, and could earn her a gold in that event, not to mention give the U.S. a point advantage in the team competition.

Outside the gym, Lee has had a challenging road to Tokyo. She’s recovering from a broken foot, and in 2019, the day before she left for the U.S. championships, her father fell while helping a friend trim a tree and was paralyzed. He needed surgery the day Lee competed, but she somehow managed to push through her worry and finish second, asking her family to text her coach after the operation even if she was in the middle of a routine. Then last year, she lost an aunt and uncle to COVID-19, a devastating blow to the close Lee family who are members of the equally tight H’Mong community. “This means so much to me. I’ve worked so hard for the past couple of years,” she said after making the Olympic team.

Jordan Chiles competes on the vault during the Women's competition of the 2021 U.S. Gymnastics Olympic Trials at America’s Center on June 27, 2021 in St Louis, Missouri.
Carmen Mandato/Getty Images—2021 Getty Images

Biles’ training mate at World Champions Centre in Texas, Chiles assured her spot on the team with consistent programs during the U.S. National Championships and Olympic Trials in June. Unlike Biles and Lee, who were guaranteed spots on the team as the top two scorers during Trials, Chiles was named to the team by a USA Gymnastics committee. It was a spot Chiles once thought she’d never earn. At the 2018 National Championships, Chiles finished 11th in the all-around competition, and questioned whether she wanted to continue pursuing elite gymnastics. That’s when Biles, whom she’d gotten to know through the competition circuit, made a fateful suggestion—why not move to Texas and train with her? The change was all Chiles needed, physically and mentally, to make her Olympic dreams come true.

A member of the 2018 and 2019 World Championship teams, McCallum is a consistent competitor who should help the U.S. on beam, though she is coming back from injuries over the last year. In January, she broke her hand while training on the beam, and needed a plate and seven screws to stabilize the bones. Tom Forster, high performance and team coordinator for the women’s program at USAG, said McCallum’s scores during the two-day competition at Trials secured her spot on the team.

Skinner was within a hair of making the four-person team, after a stunning performance at Trials but ultimately the USAG selection committee decided to go by the numbers and award the last spot to McCallum, who finished fourth while Skinner finished fifth. A floor and vault star, Skinner will compete in the individual events as one of the two newly created individual spots for Tokyo. An alternate on the Rio team after finishing fourth at Olympic Trials then, Skinner said that the desire to make the Tokyo team drove her to continue training while competing at University of Utah. “All my hard work paid off,” she said after making the team. Skinner will be able to compete on any of the four events during the individual competition finals as long as she has one of the top two scores among the U.S. members in that event during qualifications.

Read More: The U.S. Women’s Gymnastics Team Is Still the Favorite in Tokyo. But There’s Little Room for Error

Carey had already secured one of the new spots on the Olympic team, in the individual events, based on her performance in a new FIG series called Apparatus World Cup that began three years ago. Under this new qualifying system, Carey needed to amass enough points to earn an invitation to the Olympic team, which she did. The USAG then decided to let Carey decide whether she would take that individual spot, or try for a spot on the team. (With an individual spot, she could not compete in the team event.) If she did decide to take give up her individual spot, it could not go to anyone else and the U.S. would be sending a five-woman rather than a six-woman team.

Carey decided to keep her individual berth, which meant U.S. Nationals and Olympic Trials were opportunities to test her skills and nerves before her Olympic debut in Tokyo.

The original version of this story misstated the conditions under which MyKayla Skinner can compete in the individual gymnastics apparatus event finals at the Tokyo Olympics. In addition to competing in the qualification round, she must also have one of the top two scores of the U.S. team on any apparatus to compete in the finals for that apparatus. 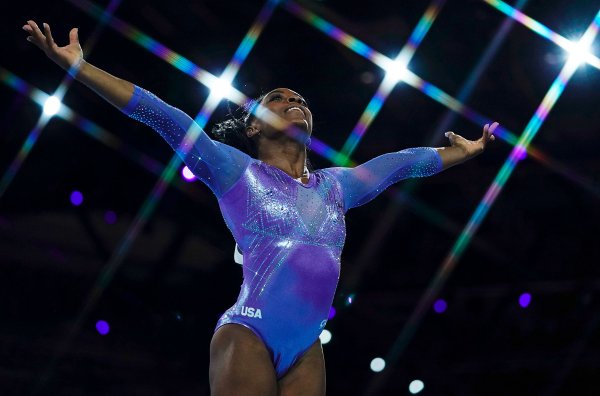 Simone Biles Is Already the Best Gymnast Ever. She'll Be Even Better for Tokyo
Next Up: Editor's Pick