Why Congress Deserves Its Own Emmy Category

Democratic Senator from West Virginia Joe Manchin speaks to reporters after President Joe Biden met with lawmakers seeking their support for his two-bill approach to infrastructure spending in the Capitol in Washington, on July 14, 2021.
Jim Lo Scalzo—EPA-EFE/Shutterstock
By Philip Elliott

As Emmy nominations came out this week, one couldn’t help but note one important absent category: Best Performance By a Politician.

Surely the pantomimed outrage, concern and indignation coming from Congress right now deserves a nod from the Television Academy. As Democrats unveil what appears to be their two-track strategy to pass more than $4 trillion in new spending on traditional infrastructure projects, plus anti-poverty programs, childcare efforts and plans to fight climate change, performances from Democrats and Republicans alike are playing out daily on C-SPAN and cable news. Just don’t expect either prong of this agenda to glide neatly onto President Joe Biden’s desk. If either piece gets that far, it will be more like a banged-up bank-shot. Dramatic tension is best, after all, when the prospect of failure is plausible.

Democrats control the House, the Senate and the White House but are far from guaranteed to notch a win here. They’re not just fighting arcane Senate rules with a highly unusual work-around and Republicans who have made opposing Biden’s Build Back Better agenda a cornerstone of their re-election plans next year. Democrats are also facing down each other with exactly zero margin for error. If actors are taught to play to the back of the house, these lawmakers are playing to the audience back home in their states, which means a whole lot of parochial pandering and plenty of home-state priorities are being written into the wish lists.

Take the recent performance of Sen. Joe Manchin, one of Senate Democrats’ biggest problem children. We’ve covered his tricky politics in this newsletter before, but a reminder of this truth: he may be the last Democrat who can win statewide in a very Trumpy state. Senate Democrats recognize his political value and give him more slack than progressives in the party would, particularly as they push to get an ambitious climate agenda into the $3.5 trillion reconciliation deal.

When Manchin left yesterday’s luncheon with fellow Democrats and special guest Joe Biden, you had to really bring along a dramaturg’s ear to figure out what he was actually saying. “Anyone moving in a direction where they think they can walk away and just not have any fossil (fuels) in play—that’s just wrong, it won’t happen, it can’t happen,” Manchin told reporters on the Hill immediately after Senate Democrats’ audience with Biden.

But then Manchin threw out a line intended to signal that he would get to yes on some of the climate-change provisions in the deal, in the name of saving the carbon-dirty coal industry. “Hopefully we can come to an agreement that they understand fossil is going to play a part, but it’s going to play the cleanest part to help clean up the global climate,” he said.

It’s tortured logic, but it may play in Parkersburg, West Virginia. Manchin’s state is second only to Wyoming in coal production and about one-sixth of its GDP is tied to the sector. But it’s a shrinking factor in the state and even those working in the coal industry see mines closing up and jobs not returning, no matter what politicians say. Manchin knows the power of symbolic stances like his opposition to anything remotely approaching a Green New Deal.

Manchin may be the most obvious thespian on the Hill but he’s certainly not the only one. Sen. Jon Tester of Montana has been making noise about the costs of the infrastructure project. Sen. Elizabeth Warren of Massachusetts is campaigning to cover its costs by going after the super-rich tax dodgers. Sen. Ed Markey, also of Massachusetts, has been relentless in keeping the climate-change battle inside the bounds of the agenda. And Sen. Patty Murray of Washington state, as a former preschool teacher, has battled to keep childcare in the mix. Any one of them could have—and still may—detonate the deal if the negotiated plan falls apart.

Senior Democrats remain optimistic that they can corral their own to get the 50 votes needed to pass the $3.5 trillion plan; the procedural loophole known as “reconciliation” allows them to avoid a 60-vote threshold to break a filibuster. There may be some performative objections still to come, but Biden wouldn’t have put his neck on the line by rallying his former Senate colleagues around the negotiated deal unless he were sure it can get across the finish line.

But there’s one thing rotting off-stage here. Senate Democrats negotiated the big deal only with themselves. They’re counting passing the plan with 50 Democratic votes plus a tie-breaking yay from Vice President Kamala Harris. But reconciliation carries some very specific and arcane provisions. Importantly, everything has to be related to spending—i.e., no major policy funny business like voting rights—and the spending included in the bill cannot cost money outside a certain window, generally accepted as 10 years. We don’t have final language for how and when Democrats plan to spend $3.5 trillion on their so-called “human infrastructure” plans, but it had better be very carefully drafted, or Senate Republicans will take it apart through the all-powerful Senate Parliamentarian.

And what about the other almost $600 billion, the bill that deals with traditional infrastructure like roads and bridges? That second bipartisan plan finalized last month needs to be passed by 60 votes. The $579 billion price tag seemed like it was a no-brainer for Republicans whose communities need new tunnels and Internet upgrades as much as Democrats, but as Politico smartly notes, support for the plan is now “going wobbly” as Republican negotiators feel burned by the Democrats’ go-it-alone second track. Democrats still need 10 Republicans to cross the party line to support the plan. So far, they aren’t yet publicly committed to doing that, but Senate Majority Leader Mitch McConnell isn’t torpedoing it, either.

Which is why the award for best performance isn’t merely a Democratic category. Republicans are lining up with their objections, too, bemoaning the end of bipartisanship. This all makes good fodder cable news panels—and this newsletter—but it doesn’t always reflect what’s actually going on. Once you start watching press conferences like a Real Housewives episode, things start to make more sense; this is broadly scripted, even when it’s masquerading as reality. In Washington, it’s all must-see T.V., but for most Americans, politics makes for lousy viewing. 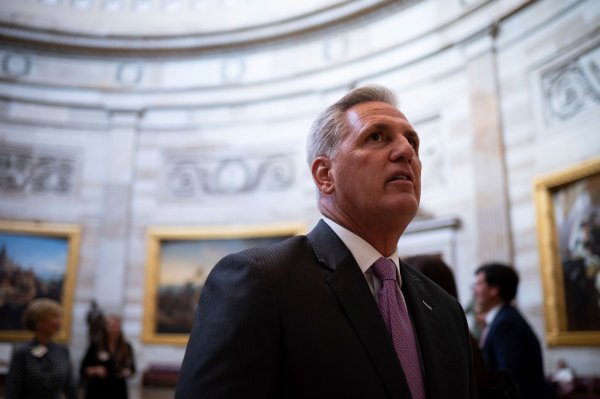 By Making the Jan. 6 Probe Political, Republicans Stand to Re-Run Benghazi Playbook
Next Up: Editor's Pick