Manchin Again at the Center of the Democrats' Agenda Troubles

The matching color palette was a nice touch when members of the Senate Democrats’ Leadership team came out of a closed-door lunch meeting with all members yesterday: a pink tie on Senate Majority Leader Chuck Schumer, a pink blouse on Democrats’ policy maven Sen. Patty Murray and a pink jacket on messaging chief Sen. Debbie Stabenow. Each tried to project a sense of unity among the Democratic caucus. But the political reality was anything but rosy and, by this morning, it was pretty washed out.

Most of the questions tossed at Schumer during his weekly news conference were about the Democratic agenda’s apparent stuck-in-the-mud status. A voting-rights bill now seems DOA. Infrastructure and a plan to fix it are crumbling. Even an equal-pay provision collapsed this week. Throw in the need to fund existing transportation programs, keep the government’s credit card ticking and ambitions to tackle gun violence and criminal justice, and it’s easy to see why aides at the Capitol are popping migraine meds like candy.

Three of the seven questions asked of Schumer singled-out Sen. Joe Manchin, the West Virginia Democratic who, at the moment, seems unbowed in his reputation as an unapologetic evangelist for bipartisanship and a roadblock to his party’s plans. Over the weekend, he announced that he wouldn’t back a voting-rights package that has cleared the House and instead would prefer a scaled-back version. Schumer could do nothing but smile and shift his weight nervously.

“I don’t talk about my private conversations with Senator Manchin,” said Schumer, who has true personal affinity for Manchin and appreciates the tough politics he faces in a state that went for President Donald Trump last year by the second-largest margin in the country. But he also has told colleagues that the voting-rights legislation will get a vote just before the July 4 recess—with or without Manchin. Schumer says he’s open to “change a few things here and there,” but won’t back down.

It’s just the latest example of Schumer, a shrewd political messenger who cut his teeth in the tough New York City media market, doing what he can in public while working the phones and back hallways to get his unwieldy team on the same page. Unlike Senate Minority Leader Mitch McConnell and House Speaker Nancy Pelosi, discipline inside the Democratic caucus in the Senate isn’t exactly orthodoxy. (In that, Schumer has an unlikely counterpart with House Minority Leader Kevin McCarthy, whose members just ousted the No. 3 in Leadership for telling the truth.)

Meanwhile, McConnell told reporters yesterday that he won’t support the Democrats’ other, scaled-back voting-right measure, named for the late Rep. John Lewis, a civil rights icon and the conscience of Congress. That bill would restore parts of the 1965 Voting Rights Act that require certain states to get federal approval before changing its election laws. In shooting down this proposal, McConnell shuts yet another door on Democrats’ agenda as they remain in the first quarter of Biden’s first term without the needed 10 GOP votes to move anything.

Voting rights are hardly the only problem facing Democrats on the Hill and President Joe Biden, who left today on a week-long foreign trip with his own party on the brink of a brutal internecine fight. Talks about infrastructure between Biden and West Virginia’s other Senator, Republican Shelley Moore Capito, ended yesterday with an agreement that the talks had been in good faith but ultimately unproductive. That leaves second-tier talks to pick up between an unofficial coalition of bipartisan Senators still looking for a deal. Biden phoned Manchin, as well as Democratic Sen. Kyrsten Sinema and Republican Sen. Bill Cassidy, to urge those talks to continue while he is away, pledging to stay in touch while telling them senior White House officials are at the ready if a breakthrough suddenly looks possible.

But so much of this still hinges on Manchin. But he isn’t game to bypass the filibuster and pass anything without at least 10 Republican votes required to end that talk-a-thon. And he also isn’t keen on using a procedural budget trick to find a one-time loophole to keep the filibuster but still get something done. Even this morning, he told reporters at the Capitol that he met with colleagues from both parties last night for three hours and wasn’t ready to bail on infrastructure just yet. “I never give in,” he told NBC.

Around Washington—and the country, really—progressives did little to conceal their rage toward both Manchin and Sinema, whom we considered late last week. More than 90 nominal allies to the White House late yesterday sent Biden’s team a letter demanding action now, saying it’s past time for talks with Republicans who may never get to yes. The typical progressive groups found their way to the signatories, but it had some notable middle-of-the-road folks who aren’t usually eager to criticize Biden, including one of the nation’s largest unions, SEIU.

For his part, it seems Biden is tiring of the chase. In the same statement that the White House announced the Biden-Capito talks had fallen apart and that the President had spoken to the other team of negotiators, it also noted that Biden had spoken with Schumer, who if he can keep Manchin and Sinema from bolting on infrastructure, could go it alone.

Schumer has not backed away from passing the infrastructure bill through that single-party budget loophole, Democrats say. He will just allow his members to pursue twin paths and see which gets to a finish line first: the bipartisan talks that have all the trappings of delay, or the approach that could go big quickly—if Manchin and Sinema fall in line. Privately, some Democrats expect Manchin will eventually find a way to get there, but Manchin has a stubborn streak and rightly insists he knows the partisan pain threshold of his state better than anyone. When Manchin says the voters of the Mountain State sent him to Washington to build bridges and not modernize civic identities, he’s not wrong.

Which is why Schumer’s deputy, Majority Whip Dick Durbin, insisted the Democrats would continue chasing Republican support without much oomf behind his rhetoric. “This is a Senate that is determined to be active and productive. We’re doing our best to reach out to the other side of the aisle for a bipartisan approach to as many issues as possible. I think that is what the American people are looking for. And that’s what we want to deliver,” Durbin said, blandly.

His tie’s color? Blue. He may have accepted what was coming, even if his colleagues weren’t quite there yet. 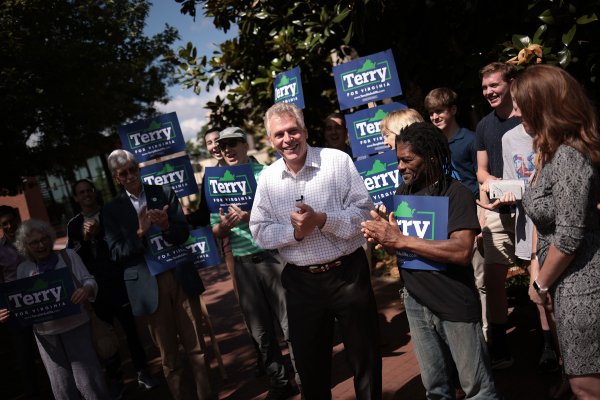 It’s Eerily Like 2009 in Virginia’s Gubernatorial Primary
Next Up: Editor's Pick