Democrats Bring Popular Efforts to the Senate. Why They Keep Dying

Staffers place a sign on a podium in preparation for a news conference with House Democrats regarding H.R. 1, the For the People Act, on Capitol Hill on March 3, 2021.
Kent Nishimura—Los Angeles Times/Shutterstock
By Philip Elliott

Increasingly, it seems as though the substance of the legislation being bandied about at the Capitol doesn’t really matter. Instead, partisan fault lines are as predictable as Washington’s humidity, and both are swamping Democrats’ hopes of getting big-idea bills to President Joe Biden’s desk. If it weren’t so maddening, it would be laughable.

On Tuesday night, Senate Democrats attempted to begin the debate over a massive voting-rights package that would undo restrictive bills that have made their way into state laws in places like Georgia, Florida and Arizona. Along a party-line vote, Republicans blocked even the first steps on the measure. Backers describe it as an attempt to defend democracy itself, and its detractors decry as an overstep on elections, which should be run by the states and not by Washington.

But voters? They really like it. In fact, when partisan cues are stripped from polling and pollsters simply ask about the meat of the proposal, more than 80% of Americans agree that foreign interference in U.S. elections should be a no-no, that money is too prevalent in politics and that election security can be improved. When it comes to making it easier to vote—same-day registration, 15 days of early voting and nonpartisan redistricting commissions—support still stays north of 60%, according to Vox polling from the spring.

Still, Republicans are standing lockstep against what Democrats have titled the For The People Act. And Democratic Sen. Joe Manchin is standing with them—not because he disagrees with the Democrats’ bill on its merits, but because he says a partisan voting-rights bill could spark the kind of distrust and anarchy that besieged the Capitol on Jan. 6. After intense lobbying from top Democrats, Manchin ultimately voted to begin debate but remains committed to finding something that can pass with Republican votes.

Manchin has offered his own compromise, notably including a voter-ID requirement that was missing from Democrats’ earlier draft. Progressives have long argued that such a requirement is unfair to minorities and elderly voters who may not have access to such documents, but liberal voting-rights maven Stacey Abrams blessed Manchin’s compromise attempt. Progressives like Sen. Bernie Sanders, too, signaled they could accept Manchin’s plan if it meant getting his vote. And the voter-ID question isn’t as partisan as many in the Democratic coalition had once feared: Monmouth polling out just yesterday found voter-ID requirements have the support of 62% of Democrats and 87% of independents. (Republicans, who for years have argued poor and minority voters were cheating the system in places without voter-ID laws, support the requirement with a whopping 91%.)

So even if the Democrats’ For The People Act goes down, Manchin’s compromise is going to get across the finish line, right?

Manchin may have found the sweet spot on voting rights on policy, but he can’t change the politics of Washington. As soon as Manchin rolled out his proposal, Senate Minority Leader Mitch McConnell tossed a bucket of ice water on it, saying Republicans still won’t put new federal curbs on what traditionally have been state affairs, and won’t support his plan. McConnell’s allies fell in line, sensing the merits in denying Biden a win at this point and reinforcing every toxic instinct of The Big Lie. Absent 10 Republicans siding with Democrats to open the door to an actual vote, the GOP can threaten a filibuster and shut down the Senate. So even though Manchin found a voting rights plan that is popular with voters on both sides, only lawmakers wearing blue jerseys are willing to stand with him.

If all of this sounds familiar, it should. It’s close to the pattern that’s been playing out for months on bipartisan and popular criminal-justice efforts that have drawn a broad and powerful coalition of backers. It’s the same dance with an infrastructure bill, whose details are also expected to emerge as soon as today. (Early signs suggest about $580 billion in new spending, although with almost two dozen Senators drafting the outline on legal pads, Post-It notes and magic markers, it’s become something of a muddle.)

Washington is also looking nervously at an Aug. 1 deadline to increase the federal credit card’s limit on red ink, a must-pass transportation bill by Sept. 30 and a raft of expiration dates through the summer and fall for COVID-19 relief programs up for renewal. Each is politically inert, broadly popular, but nonetheless far from guaranteed.

Lawmakers here in Washington respond to one thing above all else: power. So much energy in this town is spent chasing and defending it that it’s amazing that anything unrelated to that race ever gets finished. So when considering why GOP lawmakers are not even listening to their base’s support for the voting-rights package, it’s worth remembering that something can be simultaneously popular but not agenda-setting. Until there is a cost for inaction, Republicans aren’t going to bend. At least until there is an appreciable threat to their power. 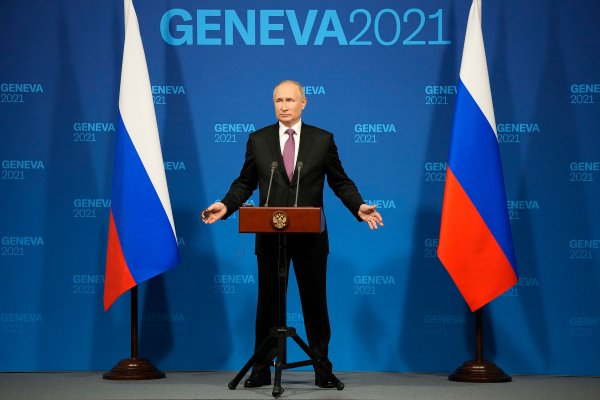 Moscow's Long History of Turning the Tables on Washington When It Comes to Human Rights
Next Up: Editor's Pick