The soul singer and civil rights activist talks collaborating with Bob Dylan, memories of Martin Luther King, Jr., and a new album, If All I Was Was Black, out Nov. 17.

TIME: You’ve made 15 studio albums. What inspired you to get back into the studio?

STAPLES: We’re living in trying times right now. What I’m seeing on the news really makes me feel like I’m back in the ’60s. These are songs that will inspire people to do better, to love one another, to come together.

One of the songs goes, “There’s evil in the world, and there’s evil in me,” and you go on to say you’re going to “try harder.” What do you mean by that?

We should try harder to love one another. I feel compassion, and I want you to feel the same compassion. We have a man in the White House who has started a resurgence of bigotry and hate. The way he talks and the way he portrays himself—what he says doesn’t make sense, it doesn’t make good sense. And it’s spreading. It’s spreading.

Another song, “We Go High,” references Michelle Obama’s 2016 Democratic National Convention speech. Why did you include that line?

When she said that, I just jumped. It’s something that we as black people do. When they call us names, when they talk about us, when we get knocked down, we don’t stay down. We get back up.

You have this persistent optimism. What’s your secret to staying hopeful?

I just believe. It’s not just for black people, what I’m singing about. It’s to bring us all together. I’ve seen us have a black government; that’s something I never thought I would see. As far as us coming together as one, I’m gonna keep on praying. But I don’t think I’m going to see us coming together like that in my lifetime. When I saw that man marching in Charlottesville with torches, my mind was going, The next thing they’re going to do is torch a cross. I’ve seen burning crosses. The only thing that’s different is that the Charlottesville marchers didn’t have white sheets over them. My heart gets heavy, but when I sing these songs, I get lifted.

What’s it like to work with Jeff Tweedy as a producer and writer when you’re making this music?

He didn’t want to release the song “If All I Was Was Black.” And he definitely didn’t want it to be the title of the album. So I had to tell him, “Tweedy, you are black. You know me inside out, and I know you. You’re black.” Jeff Tweedy is a person who has beauty and good in his heart. This is my third album with him. He’s a poet.

You’re heading on tour with your longtime friend and collaborator Bob Dylan. Why do you like working with him?

We met when I was 17 and Bobby was 16. He’s a good friend, and this is what friends do. We come together.

I’ve heard that you were once more than friends.

We were courting. And we would snuggle every now and then. He proposed, but I felt like I was too young. I’m older now. I just might propose to him! I don’t know what might happen. The world would be shocked if Bob and I got married, so I won’t do that. I’m just happy we’re friends.

Do you ever get tired of the constant grind from all the work you’re doing?

I’ve been doing this since 1960. When we met Dr. King in church, my father told us that if he can preach it, we can sing it. We’ve been singing the message-songs ever since. Every year people tell me, “Mavis, my goodness, when are you going to retire?” I’m almost 80 years old. But I’m not ready to retire. This is what God wants me to do. My voice is as strong as ever 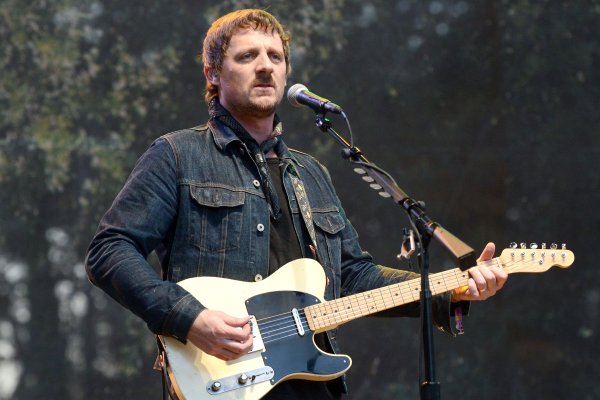 A Country Star Busked Outside the CMAs and People Loved It
Next Up: Editor's Pick