It was a fitting way to end a memorable Games for first-time Olympian Simone Biles and veteran Aly Raisman. The American teammates, gold and silver medalists in the all-around competition, closed out the 2016 Olympics by taking the top two spots on floor exercise, their best event.

The top two qualifiers and the only two gymnasts to score above 15.0 on floor in the all-around event, the pair performed the two most difficult routines in the competition. So it wasn’t a surprise when they finished, in a repeat of the all-around results, with gold and silver. Amy Tinkler from Great Britain won bronze.

Happy as they were the results, both Biles and Raisman say they were prouder that they earned higher scores on their last routines in Rio than they had during the rest of the competition.

“I think we put the cherry on top with Aly and me finishing on floor as well as we did,” said Biles.

Biles’ and Raisman’s two medals gave the U.S. women nine in Rio, surpassing the eight the team won in 2008.

That’s five medals for Biles, 19, and her fourth gold in Rio—which ties her with four other gymnasts for the record at a single Olympic Games. Those records are decades old, however, set at a time when the scoring for gymnastics was different, and the skills gymnasts threw in their routines were far tamer than the acrobatics that athletes like Biles and Raisman pull off today. In the modern era, where more difficult and intricate skills are rewarded, no other gymnast has the level and variety of skills on vault, beam, bars and floor as Biles.

“There is some sense of relief,” she said after finally completing her seven days of competition in Rio. “But I am sad at how fast this whole thing went. I’m excited it’s over but kind of sad too.”

U.S. National Team Coordinator Martha Karolyi, who coached Romania’s Nadia Comeneci to gold in her first Olympics, in 1976, said both Comeneci and Biles “are ahead of their time. Nadia was so much better than everybody else at that time, and right now I think Simone is so much better than the whole field all over the world.”

Aimee Boorman, Biles’ longtime coach, called the Games “fulfilling,” despite her star pupil falling shy of the five golds some had expected from her when she earned a bronze in the beam.

Raisman, who at 22 is affectionately known as “grandma” by her younger teammates, was happy with silver, joking that in any competition with Biles, second is as good as winning. “She’s just in another level,” Raisman said Tuesday. “It’s amazing; it’s hard to put into words. I can’t believe she has four gold medals. I’m in awe of watching her and I’ve trained with her for so long. Laurie said before floor today, if you get silver you’re the best because Simone doesn’t count.”

Each member of the Final Five, as the U.S. women named themselves, leaves Rio with at least one medal — their team gold — and all but Douglas also have hardware from their individual events. It’s a fitting finale for the group that will be the last to compete as a quintet. In 2020, the Olympic teams will consist of only four members. It’s also the last team that will be overseen by Karolyi, who retires after Rio.

“It’s been a phenomenal experience, and the whole team did a very good job,” says Biles. “And we ended on a good note for Martha.” 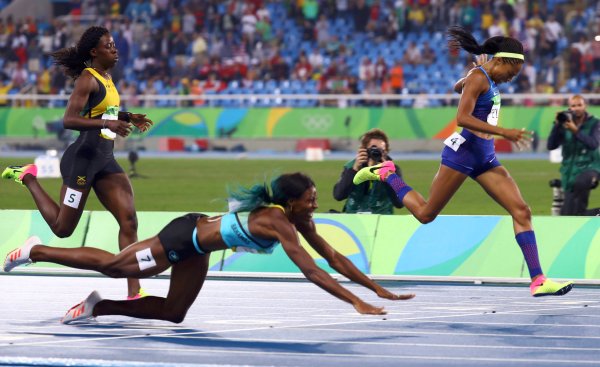 Twitter Is Conflicted Over Shaunae Miller's Finish Line Dive
Next Up: Editor's Pick