Simone Biles Is Already the Best Gymnast Ever. She'll Be Even Better for Tokyo

When you’ve won seven national championships, 19 world titles, five Olympic medals (four of them gold), and your leotards are already decorated with a rhinestone goat (a nod to Greatest of All Time status), is there anything left to prove?

For most people, the answer is no. But Simone Biles is not like most people, or even most Olympians. The 4 ft. 8 in. 24-year-old from Spring, Texas, is not only the most dominant gymnast of her time—she is likely the greatest in history. With an unmatched blend of skill, power and daring—and more than a splash of charisma—Biles has won every all-around national, world and Olympic competition she has entered since 2013. Her record haul of 25 World Championship medals is five more than that of her closest rival—who retired in 2004. Biles has four gymnastics skills named after her, an honor reserved for the first competitor to execute a new move in a major international competition. And she has a fifth that she is likely to unleash in Tokyo—a gravity-defying vault that only male gymnasts have completed on the Olympic stage.

“She is superhuman,” says Jordyn Wieber, a member of the gold-medal-winning 2012 U.S. Olympic team and the head women’s gymnastics coach at the University of Arkansas. “She could be doing the exact same routines [she did] in Rio and still win. Yet she is challenging herself, constantly competing against herself, which is only elevating our sport and pushing the rest of the athletes to step up.”

That determination was tested after her soaring performance in Rio in 2016. Biles took a year off following the Games, never once setting a foot in the gym, to rest her body, prepare mentally for another Olympic cycle and reckon with the challenges of her newfound fame (not to mention move out of her parents’ house and learn how to run a dishwasher).

In early 2018, Biles revealed that she is among the hundreds of athletes who were abused by the convicted sexual predator Larry Nassar, the former USA Gymnastics (USAG) team doctor. Among the survivors, she is the only one who is still a competing member of the national team—adding yet more for her to carry alongside the sky-high expectations.

Speaking out was liberating, Biles says, but made preparing for Tokyo, particularly with the COVID-19 delay, that much more challenging. The gym, which had always been a sanctuary of sorts for Biles, became a constant reminder of the abuse. “And I don’t think the extra year helped with that, since it was, ‘Ugh, another year dealing with [USA Gymnastics], another year dealing with this,’ ” she says. “How much can I take before I had enough?”

In addition, for the first time since she was 6, Biles had new coaches: the married couple Cecile and Laurent Landi. Before agreeing to train her, they wanted to be sure Biles was pursuing a second Olympics for the right reason. “She wanted a chance to see how far she could go,” says Cecile. “We saw it was coming from her heart.” Biles admitted to them that she had been operating on a sort of autopilot, doing what was expected of her but not particularly enjoying it. That may well have been enough to win, but she knew she had more in her.

Biles didn’t want to one day wonder what if. “Now I can look back like at least I tried,” Biles tells TIME in mid-June from Spring. “I still love the sport, and that’s why I’m doing it.”

When the Tokyo Olympics finally kick off on July 23, this relentless drive to be better, combined with a different training regimen, unparalleled talent and an unwavering resolve should conspire to make the greatest of all time somehow even greater. Now, Biles says, “We talk about Simone 2.0.”

For nearly 18 years, Biles knew what to expect at the gym. But when her longtime coach Aimee Boorman took another job during Biles’ year off, she and her family saw an opportunity for a new approach. The Landis, both former gymnasts on the French national team, made the case that they could make Biles even better. “They start with the basics, and focus on the root basics before the big skills, which I never really did before,” says Biles. “I had stopped working on the basics. But it went smoother than I thought it would.”

Laurent Landi’s first task was to build Biles’ confidence on uneven bars, her weakest event, by making her swings and catch-and-release skills more consistent. “I definitely don’t hate bars anymore,” she says. “And I trust myself a little bit more.”

He also pushed her to try the triple twisting double salto on floor exercise—that’s two backward flips while simultaneously twisting three times before becoming earthbound—after she mentioned that she used to try the move for fun knowing she could land in the safety of the foam pit. “He said, ‘I think you can do another twist—just try it and let’s play with it, and in a few months, I think it might work,’” says Biles. “I was like, ‘I don’t think so.’” Laurent was right, and Biles was happily wrong, and the skill has since become a highlight of her routine.

Twists, flips, turns, the evolution of a skill—these are the things that get Simone Biles excited. Ask about her motivation, her mindset, her feelings and, well, the conversation is likely to be much shorter than if you had asked her to explain the Amanar vault. But speaking out against Nassar and USA Gymnastics has helped her both confront her own trauma and embrace the power that can come from sharing it. “There were days I broke down—I couldn’t do it,” she says. “I had to leave the gym to take mental-health days.”

Therapy was critical—even if Biles resisted it at first. “I personally took her to her therapy sessions,” says her mother Nellie. “It was something she needed, but she couldn’t drag herself to therapy. So I made her trips with her, and waited outside. Let me tell you, it took years of therapy until she got a better grasp on what happened and could feel it was not her fault.”

Biles also came to understand her growing clout. She has demanded accountability from USA Gymnastics, the sport’s governing body in the U.S., continuing to press for more clarity on how Nassar remained in a position to abuse gymnasts, even after a report was filed about his behavior to the organization. (USAG did not respond to TIME’s requests for comment.) And it was only after she said in a letter posted to social media that she did not want to return to the training site where Nassar abused the gymnasts on a regular basis that USAG shut down the facility. “Nobody wants to go back where something tragic happened,” Biles says, “and that was truly how I felt in my heart.”

With that letter, Biles started to find her footing as an advocate for the teammates who had survived Nassar’s abuse, as well as for future athletes. “I feel like I am the voice from the inside,” she says. “And they can’t shut us out if there is a remaining survivor speaking out for change.”

It helped that Biles’ team knew how to be supportive. The Landis had coached Madison Kocian, Biles’ 2016 Olympics teammate and a survivor of Nassar’s abuse, and they helped ease her back into the rigor—mental as well as physical—of elite training. When Biles prepared to speak out about Nassar, “we told her we’ll be there—tell us what we need to do,” says Cecile Landi. “If you want us to say something, or just be in the background, we will support you whatever you decide to do.”

It also mattered that Nellie and her husband Ron own the gym near Houston where Biles trains. Their daughter, says Nellie, was returning to “the family gym. She had the support of us, and her coaches who understood what she was going through.”

The foundation on which Biles, her family and the Landis built “Simone 2.0” set her up to land unheard-of skills-—and influence. Biles sprung onto fans a new tumbling run at the 2019 world championships with that mind-blowing triple-double. At the same competition, Biles also tested the International Gymnastics Federation (FIG) with a daring dismount off the beam—a backward double twisting double tucked salto. FIG didn’t give the skill as high a value as many, including Biles, expected because of the danger involved.

A year later, as questions mounted about how the one-year delay had affected her Olympics preparation, Biles answered with another stunner in her first competition following the postponement—a Yurchenko double pike vault. It requires explosive power pushing off the vault—backward, no less, after a roundoff and back handspring—to flip twice, with the legs in a pike position, before -landing. Which is not to say that the past 12 months haven’t taken a toll. “It was definitely a bit of a struggle mentally and physically because [gymnastics] is very taxing on your body,” Biles says. “I feel like last year my body didn’t hurt this much. If I had my body from last year, I would be blessed.”

Yet the GOAT presses on, motivated less by scores than the pursuit of her own physical and mental limits. “She is constantly pushing the envelope, pushing herself to do insanely hard skills that I can’t even fathom,” says Wieber.

Biles makes no effort to hide that ambition. Indeed, she embraces it. And that is a key part of her greatness, particularly in a sport with historically few Black women at its highest level. “She is unabashedly Simone in her energy and personality,” says Reuben May, a professor of sociology at University of Illinois who studies sports, society and race. “She has shown that you can be you and still be effective in a world that is unlike you.”

Legacy is not yet on Biles’ mind—Tokyo comes first. But she does welcome being a role model. “I hope I let kids know that it’s O.K. to say you’re good at something,” she says.“And that it’s O.K. to be the GOAT.” 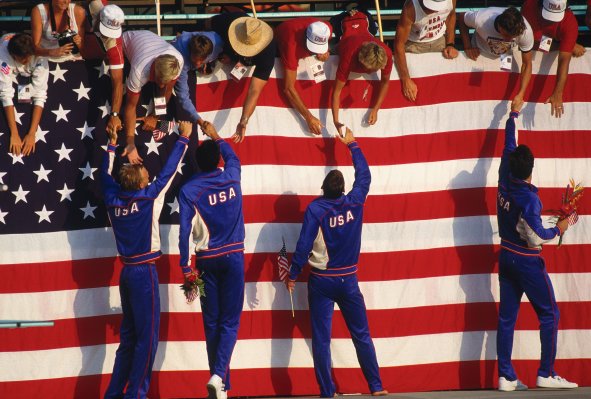 Here's Why the Olympic Games Keep Going
Next Up: Editor's Pick