Frozen Fans Lobby Disney to Give Elsa a Girlfriend in Sequel

Frozen fans have an idea for Disney’s highly anticipated sequel: Give Elsa a girlfriend. The hashtag #GiveElsaaGirlfriend trended on Twitter this week after fans questioned why Disney movies don’t have LGBT characters.

Frozen, the highest-grossing animated film of all time, was hailed for its progressiveness when it first premiered in 2013. The film eschews the romantic prince-saves-the-princess plot in favor of sisterly love.

But fans are hoping that breaking down gender norms is just the first step and are calling on filmmakers to make Elsa a role model for LGBT children in Frozen 2, which is currently in production. Coincidentally, the first movie’s Academy Award-winning theme song, “Let It Go”—that inescapable earworm that parents are probably listening to for the millionth time this morning—was adopted as a LGBT anthem.

The social media movement came as Walt Disney Studios flunked GLAAD’s annual Studio Responsibility Index that measures LGBT representation in television and film. Walt Disney Studios, which owns the Star Wars and Marvel superhero properties, among others, released 12 movies in 2015, none of which had any LGBT characters, major or minor.

“Of all the studios tracked in this report, Walt Disney Studios has the weakest historical record when it comes to LGBT-inclusive films,” GLAAD wrote of the mega entertainment company. “For the first time since beginning this report, GLAAD did not find any LGBT-inclusive content among Disney’s yearly slate of films.”

Disney, which did not publicly reply to the GLAAD report, says Frozen will likely hit theaters before 2018. 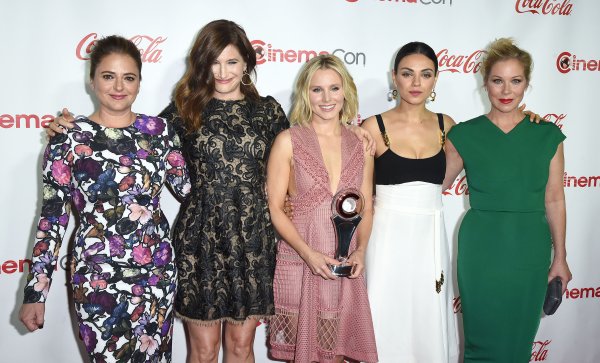 Watch Mila Kunis and Christina Applegate Face Off in the Trailer for Bad Moms
Next Up: Editor's Pick