I tweeted these thoughts last November, as many Americans and I were biting our fingernails and praying that we wouldn’t have to endure another disastrous four years of the Trump Administration. Voting Donald Trump out of office signaled a clear step toward progress. Still, I worried about incoming President Joe Biden’s general summation of his governing approach: nothing would fundamentally change. And I anticipated that the urgency around protecting those on the margins, particularly trans folks, would dissipate.

The year 2020 felt like the height of survival mode. The COVID-19 pandemic exacerbated long-standing inequities in employment, food security, health care and housing for numerous communities—harkening to how the AIDS epidemic initially ravaged the queer and trans community decades ago. White supremacist and state-sanctioned brutality returned to headlines after the deaths of Ahmaud Arbery, George Floyd, Breonna Taylor and Tony McDade. The epidemic of violence—mainly plaguing Black and Latina trans women—worsened, ultimately making 2020 the deadliest year on record for our trans women of color. And the Trump Administration ramped up its attacks on the trans community to erase protections against discrimination based on sex stereotyping and gender identity in health care and access to homeless shelters.

Despite last year’s many challenges, trans people have continued to fight for ourselves and our communities. Trans-led organizations like G.L.I.T.S. and House of Tulip responded to the housing needs of the trans people in their local areas and beyond. Solutions Not Punishment Collaborative was on the front lines of the fight against police brutality and mass incarceration. San Francisco’s Transgender District led the charge with their COVID-19 relief grants dispersed directly to community members. And a shining moment of glory came when an estimated 15,000 people rallied in honor of Black trans lives in Brooklyn last June. Still, there was more energy needed to bolster our efforts.

Now, more than 100 days into the new Administration, conditions for the trans community seem different on the surface. President Biden has issued executive orders establishing education, housing, health care access and employment protections for LGBTQ people and reversed the Trump ban on trans people enlisting in the military. The Administration has named and nominated a record number of LGBTQ appointees to its offices, including the first openly trans official confirmed by the Senate.

In his Pride statement, President Biden affirms an “obligation to uphold the dignity of all people, and dedicate ourselves to protecting the most vulnerable among us” and continues to urge lawmakers to get the Equality Act on his desk for signing. This landmark legislation would protect all LGBTQ Americans, representing a step toward safety and prosperity for all, at a time when both goals are under attack. To date, the Equality Act has passed through the House but still faces an uphill battle in the Senate.

While LGBTQ political insiders continuously dole out gratitude for the President’s affirmative rhetoric and statements, the trans community is facing greater threats than ever before. Anti-trans legislation is at an all-time high, as 33 states have introduced more than 100 bills to restrict our rights. From bans on trans youth participation in sports to restrictions on necessary transition-related medical care, families are finding it unsafe and unlivable in some states, most notably Arkansas, which passed laws blocking both sports participation and health care for transgender youth. Parents and guardians are considering uprooting their entire lives out of these states to find affirming refuge for their trans children. According to a recent GLAAD poll, 77% of LGBTQ Americans say they feel unsafe when elected officials try to pass laws that restrict their rights. There’s also fear that the fallout from these legislative attacks will only worsen devastating trends of psychological distress and suicidal ideation for trans youth.

The epidemic of violence also has not let up, with at least 27 trans and gender nonconforming people murdered this year. Despite a pledge by President Biden to direct federal funding to local efforts focused on alleviating anti-trans violence, no significant government actions have addressed it. In terms of health care, the Biden Administration began reenforcing protections for trans people under Section 1557 of the Affordable Care Act, after the previous Administration blocked it. But most of those systemic inequities—like in health care and housing—that we felt so acutely last year are still blocking most queer and trans people from the livelihoods we deserve. President Biden’s comments that things fundamentally would not change under his presidency don’t feel too far off for the majority of our community.

Any time we enter a new political era, groups on the margins are told to be patient, temper our expectations, demand less or feel grateful for making it as far socially as we have today. Esteemed author Toni Morrison once said, “The very serious function of racism is distraction.” I believe that to be true of all systems of oppression, including cissexism. As long as trans people are simply demanding to be seen as human or with agency and self-determination, we are being distracted from achieving our dreams, from building a better world for all, and from simply living.

The strides made in visibility are simply not enough to improve the lives of trans people. Though representation and recognition are heartening, without an analysis of dismantling the binary and cisnormativity, it falls short. And without seismic action, conditions don’t change on a fundamental level. What does visibility mean when children are being denied health care? What does it mean when Black and brown trans women are at risk for losing their lives nearly every time we leave our homes, if we have them? What does visibility mean for the trans people who are still struggling to have their basic needs met?

We need more lawmakers and leaders in every arena to actively fight against transphobia and against the conservative crusade to erase us out of existence. Every time a lawmaker introduces a bill infringing on the rights of trans people or espouses ignorant ideas about our experiences, they contribute to the existing culture of violence that plagues the trans community. Every time an ally is silent, including lawmakers, they contribute to that harm. Imagine where we’d be if liberal and progressive lawmakers had introduced more than 100 bills to protect the rights of transgender people.

Read more: Protesters Demanded Justice for Nina Pop. A Year After Her Death, What Happened to Everyone Saying Black Trans Lives Matter?

We have the power to end the epidemic of violence and need President Biden to deliver on his pledge of directing more resources to this crisis. Beyond his Administration, we all have a duty to support efforts by Black and Latinx leaders, our organizations and initiatives. My peers are often the first line of defense for the community, finding solutions around these sprawling issues of systemic oppression. Let’s also redirect funding that goes into harming the trans community through state violence to community-led efforts that keep our people safe.

Trans people are also touched by every issue, and we must be considered in our totality. Student loan forgiveness would positively impact trans Americans, lessening the financial barriers that plague us in attaining education. Combating attacks on the voting rights of Black and brown communities will ensure that a large segment of trans voters can more fully exercise our electoral power. Fully integrating the protection of trans people’s rights to bodily autonomy and health care into the larger fight for reproductive justice would present a more united front against conservative attacks. And we must fully advocate for trans immigrants, refugees and all those facing immense amounts of state violence, criminalization and brutality domestically and around the globe.

Though we haven’t always had the language and opportunities to share our experiences, trans people have always existed in the U.S. and our community has built powerful formations to care for our own for generations. But the most vulnerable of us are under attack. If we don’t act, trans youth, in particular, will live with a nearly unbearable trauma for the rest of their lives. Many trans adults want better for them than we had, and that’s why we’re demanding action. We all have the power to protect trans people and keep us alive, if only we’re willing to use it. 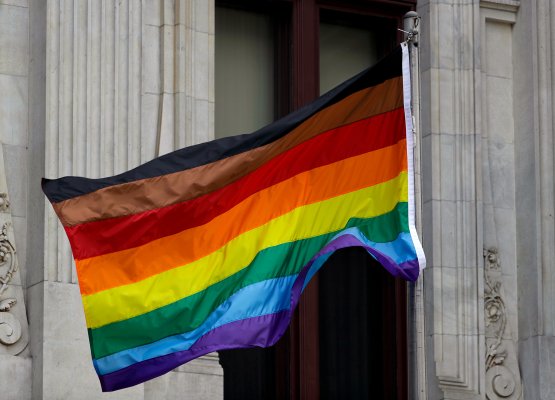 A New Crowdsourcing App Hopes to Serve as the 'Green Book' for LGBTQ People of Color
Next Up: Editor's Pick