We Have a Once-in-a-Generation Opportunity to Protect LGBTQ People From Discrimination. Will the Senate Take It?

It’s been just over 40 years since the assassination of Harvey Milk, the trailblazing gay activist who became one of the country’s first out LGBTQ public officials when he was elected to the San Francisco Board of Supervisors. And on May 22 we mark the pioneer’s birthday with Harvey Milk Day. In the time since his death, hundreds of LGBTQ people have been elected to public office in the United States and around the world. The country has changed indelibly, opening its hearts and minds to the LGBTQ community.

I never set out to be the first openly transgender person elected in West Virginia – but that’s what happened in 2020, when I was elected to serve on the Wheeling City Council. In the days that followed, national media and others seemed astounded by my win.

But it never seemed impossible for me to represent my community as a member of the city council. I’ve seen our city and our state of West Virginia move toward inclusion and equality for all. The West Virginia I know and love is ready to treat all LGBTQ people with dignity and respect, and I’m grateful that Wheeling has made it clear to the rest of our nation what we stand for.

Despite the embrace that I’ve received in recent years, West Virginia remains one of 29 states where a lack of state law leaves people vulnerable to discrimination in key areas of life–including housing, health care and public spaces like restaurants and businesses. I’ve heard stories of LGBTQ people being kicked out of Ubers, denied everyday services like lawn care or turned away by tax preparers because of their sexual orientation or gender identity. Discrimination pops up in the most seemingly mundane places, and it’s a constant worry for so many LGBTQ people.

This year, we have a once-in-a-generation opportunity to address this challenge. The Equality Act is federal legislation pending in Congress right now, and it would ensure that no one is left vulnerable to discrimination because of who they are or who they love. The LGBTQ nondiscrimination protections it would establish are supported by a supermajority of Americans, including more than 62% of Republicans. In West Virginia, 64% of residents are supportive. The bill has already passed the House of Representatives, and all we need now is for the Senate to take action.

Over the past few years, hundreds of LGBTQ people and the people who love us have shared their stories with senators and pointed to the many reasons why we need the Equality Act. I’ve personally been in a few of those conversations, including some with Sen. Shelley Moore Capito and Sen. Joe Manchin in West Virginia. As two senators with a proven history of working together, across the aisle, for bipartisan solutions that improve our country, I really hope they come together to do the right thing.

One of the accomplishments we often celebrate Harvey Milk for is his successful championing of an ordinance in San Francisco protecting people from discrimination based on sexual orientation. That was in 1978, four years after the first-ever introduction of the Equality Act in Congress, which means LGBTQ people have been waiting for nearly 50 years for comprehensive, inclusive nondiscrimination protections at the federal level. In the meantime, we’ve made so many strides, leading to the growing recognition of LGBTQ Americans and a greater understanding among voters that the LGBTQ identity of elected officials is just one element of who they are.

But this recognition is not enough. We need our senators to listen to us and finally pass a law codifying our nation’s commitment to LGBTQ equality. The difference between a full LGBTQ-inclusive nondiscrimination law and more years without it is a decision that just a few senators will make.

I ran for office because I wanted to serve my community. I wanted to get to work fixing potholes, addressing our affordable-housing crisis and finding solutions to our opioid epidemic to help build a stronger, more vibrant city. That’s what being an elected official is all about: helping the people you serve, reviewing the evidence and making changes that benefit everyone.

I’m especially reminded of that moral imperative for elected officials now, on Harvey Milk Day. It’s the question that lies ahead of Sen. Manchin, Sen. Capito and every U.S. senator: How long will LGBTQ people have to wait for equal justice under the law? It’s time for action–and it’s time for the Equality Act. 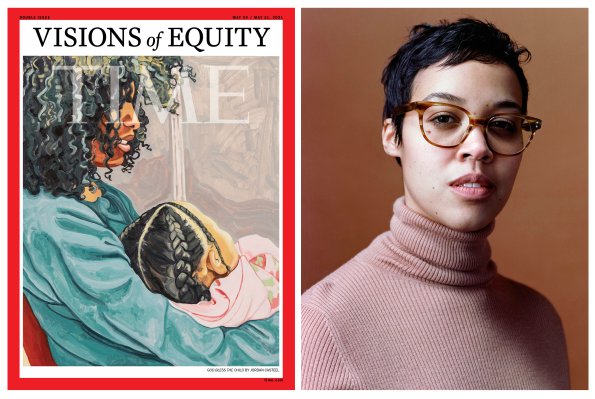 Meet the Artist Who Created God Bless the Child, Featured on TIME’s Cover
Next Up: Editor's Pick