Supporters of Black Trans Lives rallied at the Brooklyn Museum and took part in a march to Fort Greene Park on June 14, 2020.
Scout Tufankjian—Polaris
By Suyin Haynes

On June 14, an estimated 15,000 people, most of them wearing white, marched through Brooklyn, N.Y., for Black trans lives. While the event was in some ways unique, it was also part of a history that goes back to the start of the modern movement for LGBTQ rights in the United States.

For writer and activist Raquel Willis, the day was magnetic. “I had a brief moment before I spoke where I was looking out over the crowd, and I never imagined seeing that many people gathering specifically for black transgender people,” she says. “There’s such an erasure of what Black trans people go through, and this was a demonstration of our power in a way we’ve never seen before.”

Co-organized by close to 150 people, the event, dubbed Brooklyn Liberation, felt like an “out-of-body experience,” says co-organizer, writer and producer Fran Tirado. Yet the hopefulness of many in the Black trans community was mixed with pain, given the losses of Tony McDade, Nina Pop, Riah Milton and Dominique “Rem’mie” Fells in recent weeks. A day before the march, new video footage emerged from Rikers Island, where transgender woman Layleen Xtravaganza Cubilette-Polanco died nearly a year ago, showing that the jail’s staff failed to provide her with care that could have saved her life. The same day, Oluwatoyin Salau, a Black Lives Matter activist who had strongly advocated for Black trans lives, particularly the memory of Tony McDade, was found dead in Tallahassee, Fla., in a suspected homicide.

Through paying tribute to Black trans folks, the Brooklyn Liberation march spoke to the intersections of several different identities that have coalesced in the fight for equality. As Willis notes, this movement is a culmination of work from many often-marginalized parts of society—and in that sense, it is like many movements that came before. “It’s almost impossible to only look at queer history, or only look at Black history, or only look at the history of women’s liberation in regards to the work we’re doing now,” Willis says.

That intersection is as old as the modern fight for LGTBQ rights, and perhaps no moment illustrates that as well as the movement’s most famous turning point: the 1969 Stonewall Riots, the uprising sparked by a police raid at a gay bar in New York City’s Greenwich Village neighborhood, and the milestone to which Pride Month is pegged.

As they are today, members of the LGBTQ community were disproportionately targeted by police during the 1950s and 1960s, “the most homophobic period in American history,” says historian Hugh Ryan, author of When Brooklyn Was Queer: A History. “For me, Stonewall is an explosion. It’s the release of pressure from a valve. But what matters is the pressure.”

Notably, that “explosion” was spearheaded by LGBTQ Black women and women of color like Marsha P. Johnson, Sylvia Rivera, Miss Major Griffin-Gracy and Stormé DeLarverie, whose contributions have been overlooked in the past.

And, in an era during which raids on LGBTQ establishments were commonplace, the events of late June 1969 were not an isolated incident of queer-led protests against the police. Ten years before Stonewall, Cooper Do-nuts, a downtown L.A. donut shop that was a popular meeting place for transgender and gay people, was the site of an uprising against the continuous police harassment that the shop’s patrons endured. Trans women of color played a key role in the August 1966 Compton Cafeteria Riots in San Francisco, and a police raid on the Black Cat tavern in Los Angeles on New Years’ Day 1967 resulted in organized public protests against police harassment of gay, trans and gender non-conforming people. For historian Ryan, the Haven Riot in 1970, which took place at the Haven gay bar in Greenwich Village, was also a landmark event and demonstrates that there was a consistency to the militancy beyond the singular moment of Stonewall.

Another landmark that illustrated the overlap between movements stood just a stone’s throw from the Stonewall Inn: the Women’s House of Detention, a prison that housed many queer and transmasculine people and was in operation from 1932 to 1971. Oral histories recounting the nights of Stonewall suggest that the women in the prison chanted “Gay Power!” and threw their burning possessions the windows in solidarity with the uprising against the police.

The House of Detention is the subject of Ryan’s forthcoming book, and he has identified about 120 queer women who passed through the prison, arguing that these people made it a significant site in queer history. “It really did create queer space and queer connections,” he says.

It was after she saw in the prison how the oppression of gay people was connected to the oppression of minorities that Afeni Shakur went on to organize a meeting between the Black Panther Party and the Gay Liberation Front at Jane Fonda’s penthouse apartment on the Upper East side in 1970. The experience of the prison also helped shape the thoughts and ideas of fellow Black Panther political activist Angela Davis. “Angela Davis says that the Women’s House of Detention is where she started to think about prisons in a way that wasn’t just about political prisoners, but rather as a mechanism for upholding white supremacy,” says Ryan.

That shared and ongoing battle against white supremacy was invoked by the Brooklyn Liberation march organizers in another way, too: by encouraging attendees to wear white. In July 1917, nearly 10,000 Black men, women and children marched down Fifth Avenue in New York in a silent protest, organized by the NAACP to protest anti-Black violence. Women and children wore white, while the men wore black. Researching the event resonated with West Dakota, a drag queen and artist who co-organized the Brooklyn Liberation march. “I knew our action had to stand out from everything else that was happening in the city and the country,” he says.

For Brooklyn Liberation’s organizers, their movement was built to be visible and intentional, in making sure that Black trans lives are not forgotten or erased from history and the present, the way so many of these connections have been overlooked in the past.

“Our history is also our current reality,” says Eliel Cruz, director of communications at the New York City Anti-Violence Project and a Brooklyn Liberation co-organizer. And at a time when violence against the transgender community is increasing, combined with protest against police brutality and white supremacy, activist Willis says it’s vital that Black trans folks are considered in conversations. “The work goes on beyond the march.” 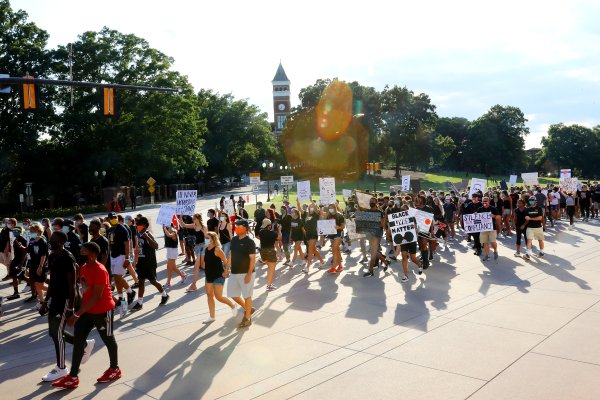 The Righteous Revulsion Driving the Change
Next Up: Editor's Pick