'Our Feminism Must Be Unapologetically Expansive.' More Than 465 Activists and Celebrities Signed an Open Letter Supporting Trans Women and Girls

Activists and their supporters rally in support of transgender people on the steps of New York City Hall, October 24, 2018 in New York City.
Drew Angerer—Getty Images
By Eliana Dockterman

This year, lawmakers have thrust trans youth into the center of the culture wars. In the midst of a pandemic, when economic and health concerns are urgent, legislators in at least 28 states have introduced a record number of bills that would restrict the rights of trans people.

In March, Tennessee, Arkansas and Mississippi passed bills banning trans girls from women’s sports. Idaho passed a similar law last year, but it was blocked by a federal judge. In South Dakota, Governor Kristi Noem issued two executive orders on March 29 effectively banning trans girls from women’s sports. The same day, Arkansas became the first state to pass a bill prohibiting doctors from providing gender-affirming medical care to trans children. Similar bills are being considered in 19 other states, even as trans advocates say such laws could impact the mental health of an already vulnerable population.

This new wave of legislation and executive actions arrives in the months after several prominent women who identify as feminists, including J.K. Rowling, said or implied that trans activism undermines the women’s movement and repeated what LGBTQ+ advocates say is the toxic misperception that trans women pose a threat to the safety of cis women.

In an effort to advocate for, as she puts it, “unapologetically expansive” feminism, trans rights activist Raquel Willis and GLAAD invited cis and trans feminist leaders to sign an open letter, published on Transgender Day of Visibility, declaring their solidarity with the trans women and girls who will be affected, on sports fields and in doctors’ offices, by the new legislation and who are vulnerable to anti-trans violence. Gloria Steinem, Regina King, Selena Gomez, Gabrielle Union, Laverne Cox, Lena Waithe, Ilana Glazer and America Ferrera are among more than 465 celebrities and activists who have signed so far.

The letter also addresses “self-identified feminists who have been promoting damaging and violent ideas about trans people for years.” “Their vitriol is, in fact, not feminist at all,” it states. “True feminists do not wish to limit any woman’s identity or freedom to fully be herself. Allowing transphobic rhetoric to go unchecked also strengthens the legislative efforts of anti-trans politicians—who now cloak their bigotry in language about protecting and supporting women.”

Willis and the other signatories call for a fight against barriers placed on trans women and an inclusive feminist movement that can accommodate “our unique experiences threaded in the larger tapestry of womanhood.” The letter is now open to anyone who wants to sign. Willis spoke to TIME about the letter, why these new laws threaten the safety of trans youth and the essential role that trans women play in the feminist movement.

Raquel Willis speaks on stage during the Out Magazine's Out100 Event on November 21, 2019 in Long Island City, New York.
Astrid Stawiarz—Getty Images

What is the impetus for publishing the open letter now?

Right now we are just seeing a massive wave of anti-trans legislation around the country, and the transgender community is only so big. We need those people who consider themselves to be allies to really show up and be more bold and vocal than ever before. In places like Arkansas, Alabama and South Dakota, where a contingent of lawmakers have made it a part of their political platform to try and strip the rights of trans people away from us—particularly transgender youth—this just cannot stand. They are literally targeting children who have been so brave in owning their authenticity. It’s just not right.

We want to build an experience where folks can sign the letter and join the conversation. We know that this is only a fraction of the women, the feminists and the people in general out there who support the trans community. Beyond this conversation, we need people to take action. We need to continue to be holding lawmakers accountable, calling them and making sure that they understand that what they’re doing will have a devastating impact on the lives of trans people and particularly trans youth.

Certain conservative lawmakers have pivoted their rhetoric from bathroom bills to youth sports bills. Do you have any sense as to why blocking trans girls from girls’ sports teams has become such a focus for them?

Conservatives turned their ire largely away from people within the LGBQ community and started specifically targeting trans people after marriage equality became the law of the land. I think part of their plan of attack is to exploit the ignorance that the general public has about transgender people and our experience. According to a 2017 Pew poll, most Americans say that they don’t know a trans person. That means a lot of times our experience is at the whim of whoever gets their narrative to the general public before we do. Many of these legislators know that there’s a lot of misinformation about gender and its complexity, and they’re trying to wage this war for political favor.

The bills on youth sports focus on trans girls and not so much on trans boys. There’s a lot to unpack there in terms of anti-trans stereotypes and historical sexism. Why do you think the focus is on trans girls specifically?

I think what we’ve often see, even with the bathroom bills, is that while anti-trans efforts target the whole community, they are almost always pinpointed on trans women and trans girls. The lawmakers targeting the trans community say they are protecting women and girls, and they often paint trans women and trans girls as predators with this false notion that we aren’t who we say we are. It’s this old, tired trope.

This is why hearing our stories authentically is so key. A lot of the myths that the general public have about trans women and girls and our experience are based on historic falsehoods. If you look at documentary like Disclosure that talks about the ways in which gender-nonconforming and trans people have been depicted onscreen for the last century or so, there’s been this false indoctrination that trans women and girls are a threat. But we’re just like anyone else. And we deserve the same access to our dreams, our passions in life, including sports, and access to health care, like anyone else.

I also wanted to ask about access to health care. For people who don’t know, I would love to clarify what kind of gender-affirming health care trans youth are fighting for and what these bills are proposing.

Often the conversation about health care for trans people in general is based on falsehoods. There is a lot of focus on particularly surgery or irreversible change of the body. Trans-ness is so much more expansive than that idea. Every trans person has a different transition, and not all of it is medical. A large part of it is social, being respected as who you truly are. And many folks don’t opt to change the body and are still perfectly and beautifully and brilliantly trans.

There are specific pieces of legislation, like in Alabama, that are targeting simply having access to puberty-blocking treatment. As someone who was a young person who didn’t really have access to either the language or simply the knowledge about what my experience as a trans person could look like, I would have been thrilled to have the option to go on puberty-blocking treatment so that I could not experience some of those devastating effects of what an initial puberty actually turned out to be for me. So when I think about that experience, this is such an attack on the rights of trans youth and their well-being.

Read more: Why the Equality Act Matters for Our Family–and for Many Others Across America

How do these laws put trans youth at risk?

This last week was the sixth anniversary of a Black trans man named Blake Brockington, who died by suicide. His story is one in which he rose to visibility after becoming the first openly transgender homecoming king in North Carolina. He received so much hate, particularly online. He was estranged from his family. And we see what those pressures ultimately meant for him. He is no longer here.

And what I don’t think a lot of these anti-trans lawmakers understand is that they are literally putting children’s lives at risk. They are making it so difficult for their families, their guardians, the people in their lives to get access to the information and the support that they may need to safely and healthily and affirmatively raise these children. It’s interesting that so much of the discussion is centered on protecting women and girls because they’re doing just the opposite.

One of the things that the letter mentions is that 2020 was the deadliest year on record for the trans community. I was wondering if you could talk about why that was the case.

Last year, we had more than 40 murders of trans people, mostly Black and brown trans women. We can’t ignore the devastating impacts of violent rhetoric. When there are lawmakers actively testifying in state legislatures and at the Capitol—if you think of someone like Marjorie Taylor Greene—spouting off misinformation about transgender people, painting us as a threat, that puts us in danger.

You’ve positioned this letter as a letter from feminists. There has been a push by some particularly famous women to exclude trans women from the feminist movement, especially over the last year. Do you think they can be persuaded to be more inclusionary or is this a more permanent split in the feminist movement?

Honestly I would rather put my energy into organizing and working with those women and feminists who have demonstrably showed up to support our community rather than using it to transform a fringe faction of so-called feminists. That is not my work. That’s not my aim. There may be another trans leader or trans person who is interested in doing that work. Just like I wouldn’t go to a white-supremacist group and try and convince them of my humanity—that’s ridiculous to me.

But with this letter it was so important for us to have a dialogue with feminist organizations and particularly prominent women. There haven’t been enough opportunities for people to truly show their support for trans women and girls. There is an anti-trans agenda that supposedly says it’s about protecting women and girls, but that movement is often led by cisgender men. I think it’s important for us as women to come together and say, “Hey, we know the patriarchy is a lie, and we know that bigoted people are trying to turn us against each other to weaken our movement.”

Read more: Fears About Transgender People Are a Distraction From the Real Struggles All Women Face

How would you like to see the feminist movement evolve going forward?

When I think about where the feminist movement is now, trans people are so crucial in the fight for gender liberation because we literally shatter those restrictive boxes that we’re all placed into. We talk about this as a trans fight, but in truth it’s a fight for everyone because we are all impacted by gender.

And our society is going to catch up. We’re not there yet. That is clear. But I think more and more as we see the younger generation coming up that sees that restrictive ideas of gender are bullsh-t—excuse my French—we are moving towards a more liberated society. 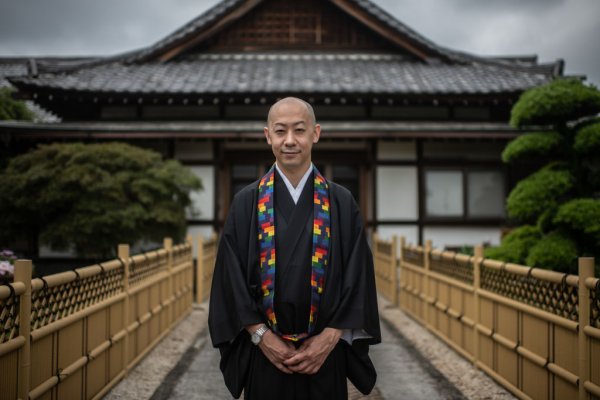 What Asia's LGBTQ+ Movement Can Learn From Japan
Next Up: Editor's Pick