Stephen King Adaptation Lisey's Story Is Mawkish, Dull and Too Long by Half

Apple TV+ has built a decent case, since launching in November 2019, for its existence. What’s surprising is that it’s done so not with the splashy, spendy dramas it keeps rolling out, from The Morning Show to The Mosquito Coast, but on comedies: Ted Lasso, Dickinson, Mythic Quest, Central Park. Sadly, Lisey’s Story, which arrives on June 4, marks another high-profile miss for the platform.

The list of talent involved rivals that of all-star TV projects like Big Little Lies. Stephen King adapted his own acclaimed novel into this psychological thriller, directed by Pablo Larraín (Jackie) and executive-produced by J.J. Abrams, which casts Julianne Moore as the eponymous widow of Scott Landon (Clive Owen), a famous author. Two years after her husband’s death, Lisey remains unmoored, living in a posh farmhouse cluttered with boxes of his detritus and taking soulful dips in the property’s strange, pond-like pool. Then a breakup leaves her delicate sister Amanda (Joan Allen) catatonic and institutionalized, further stressing Lisey’s tense relationship with the bitter third sister, Darla (Jennifer Jason Leigh).

Meanwhile, a professor (Ron Cephas Jones) who’s been bugging Lisey to give him Scott’s papers unwittingly sics one of the author’s unhinged fans on her. Jim Dooley (Dane DeHaan) is your typical quirky horror psycho: a violent, woman-hating man-child who always seems to be chomping on junk food. But he’s not the only monster in Lisey’s life. Equally fearsome are her memories of conversations with her husband that she willfully repressed—vivid accounts of the bleak childhood that led him to a career fleshing out fantasy worlds—and will have to unearth from her consciousness in order to protect herself.

Moore and Owen (who appears in frequent, confusing flashbacks) could play their respective roles, a haunted widow and a tortured genius, from beyond the grave. Scenery both real and imaginary has a dark, eerie, natural beauty (although it must be said that the fantasy landscapes could all double as ’70s prog-rock album covers). But the many extended, atmospheric stretches that rely on these visuals and performances get tedious fast. The show is too long; it wrings eight molasses-paced episodes out of a story that provides sufficient narrative for four at most. And technical competence can’t save a skeletal plot held together by pseudo-psychology or a script pocked with bad lines. “Stop pushing me, Scott,” Lisey pleads, hilariously, at one point. “You’re dead, so stop.” It doesn’t help that the only humor in the show appears to be accidental.

While King’s narrative romanticizes the relationship between mental illness and creativity, Larraín’s histrionic direction often reduces these elements to camp. In one scene, a raving Amanda squeezes a pink teacup until it shatters, the shards bloodying her hands. Not even an actor of Allen’s caliber can elevate material this maudlin. Most frustrating of all is the show’s saintly cipher of a hero. Lisey exists solely as a relic of Scott, a mirror of his love. The suffering she endures on his behalf, which predates his death by decades, is depicted with sadistic glee. If this is commentary on the misogyny directed at the self-sacrificing wives of men revered as great artists, it might’ve helped to give the character a discernible personality. 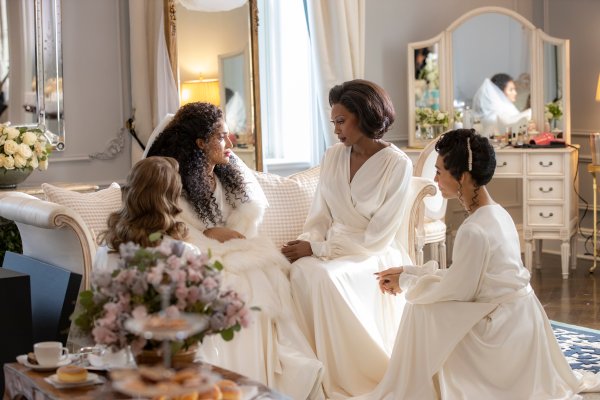 Pose Was More Than Just a TV Show. It Changed the Culture, Onscreen and Off
Next Up: Editor's Pick