Justin Theroux Is Great in The Mosquito Coast. But What Is This Muddled Meditation on American Life Trying to Say?

There’s something singular about Justin Theroux. Compared with the other leading men of his generation, the star of the new Apple TV+ series The Mosquito Coast has a presence less delicate than Leonardo DiCaprio or Jude Law, less fratty than Matt Damon or Ben Affleck, less anxious than his closest analogue, Ethan Hawke. What defines Theroux, aside from abs that have been known to make the paparazzi pant, is a brooding, cerebral sense of alienation. After 25 years in Hollywood, a celebrity marriage with ex-wife Jennifer Aniston and recently an Esquire cover, he still reads as an outsider. That quality has never felt more pronounced than it does now, as he approaches 50 and embraces what could, albeit reductively, be called his Hot, Crazy Dad period.

Theroux is not a father in real life—nor is he, as far as I know, authentically unhinged—but he played a Hot, Crazy Dad to unforgettable effect in HBO’s haunting philosophical drama The Leftovers. His role in The Mosquito Coast, an action-packed adaptation of his uncle Paul Theroux’s popular 1981 novel that debuts on April 30, puts a less sympathetic spin on the archetype. And while this updated take on the story doesn’t come close to delivering on its lofty thematic ambitions, Theroux’s dynamic, layered performance transcends the cluttered script.

Paul Theroux’s book, which was adapted as a feature film in 1986, is an allegory for the vicious circle of colonialism nested within an adventure narrative. A genius inventor who dropped out of Harvard, protagonist Allie Fox lives on the margins of American society with his adoring family and nurses a cranky, self-serving obsession with consumerism. (Theroux’s bone-deep embodiment of this character illustrates just how miscast Harrison Ford was in the movie.) Also, he’s created a machine that can transform fire into ice, but nobody cares because there’s plenty of frozen water in the U.S. So the Foxes light out to the Central American jungle, where Allie exploits cheap land, abundant natural resources and cooperative locals to create his ideal society—creating the ultimate test case for his invention and, in effect, restarting the cycle of industrialization he’s trying to escape. As the family’s circumstances devolve, what began in the vein of Robinson Crusoe or Huckleberry Finn starts to look more like Aguirre, the Wrath of God.

It would be tough to tell precisely this story today, in part because of how much the geopolitical conversation has complexified over the past four decades and in part because, although Allie is the butt of its satire, it relies on what Disney+ has notoriously euphemized as “outdated cultural depictions.” So writer Neil Cross (Luther), who adapted the book for TV with Tom Bissell, was wise to make major plot adjustments. In Apple’s seven-episode series, Theroux’s Allie is still a self-righteous, anti-American eco-MacGyver who can’t sell his fire-to-ice converter. (Did he pitch George R.R. Martin?) But this time, he and wife Margot (Melissa George) have spent a decade or so on the run from the government following some mega-crime that remains unknown to viewers—and to the Foxes’ children. While her little brother Charlie (Gabriel Bateman) hangs on Allie’s every boast, 15-year-old Dina (Logan Polish, excellent) is growing increasingly frustrated that her parents’ off-the-grid lifestyle prevents her from doing such normal-teenager things as spending hours on a cellphone with her boyfriend. She really isn’t pleased when, with the feds suddenly hot on their trail again, her father forces the family to bolt for the southern border.

This Mosquito Coast becomes a fugitive road-trip tale, with Allie enlisting coyotes to smuggle the Foxes into Mexico, where he hopes to find sanctuary for the family with a shadowy network of outlaws. In doing so, he places his family in grave danger and leaves a long trail of bodies in his wake. There are conspicuous echoes of our ongoing immigration disaster, the War on Drugs and the climate crisis. As in the original, Allie is a man disgusted by American chauvinism who can nonetheless never escape it because he epitomizes it, in his own selfishness, ego, reliance on manipulation and seeming lack of comprehension that other people are discrete human beings with their own justifiable needs and preferences. This much is clear within the first few hours, but instead of deepening the metaphor as it progresses, the show simply repeats itself.

That leaves time for multiple action sequences, as well as multiple scenes of various Foxes being lost, scared and alone in the world, in every episode. Both can feel like time wasters. Unmoored from its source material, The Mosquito Coast can’t seem to decide if it wants to be a white-knuckle thrill ride, a character-driven family drama, a high-minded critique of 21st-century America, or—once we’re introduced to a cartel assassin who’s dressed like Walter White in his all-black Heisenberg getup and flanked by a neo-Dickensian army of child urchins—a second-rate Breaking Bad. The show gets so wrapped up in building suspense that its finale lands with an infuriating thud, leaving crucial questions unanswered and central relationships unresolved. It ends so abruptly, I had to double-check the press notes to be sure I hadn’t missed an episode.

This is a series that’s always tantalizing viewers with glimpses of profundity—in its political commentary, its plot complexity, its character development. But only in Theroux’s performance does The Mosquito Coast transcend the superficial. During his anti-society soapbox rants Allie can come across as a raving loon of the most dangerous sort, yet in this rendering he’s also charming and brainy enough to suggest why Margot didn’t just grab the kids and run years ago. He’s more than a standard TV narcissist, however; he rarely falls apart when anyone questions him, and is in fact at his gentlest and most patient after someone, usually Dina, betrays him. And he seems to sincerely believe he loves his family, even if he thinks too highly of his own intelligence to value their perspectives on technology or consumerism or whether it’s a good idea to plunder the belongings of a bunch of migrant corpses they stumble upon in the desert.

Within the first 15 minutes of the premiere, viewers get a pretty thorough sense of Allie’s values. And it’s through Theroux that we, more gradually, come to understand the show’s conflicted depiction of Allie. The lingering question is also the most important one: where do Cross and Bissell ultimately come down on consumerism or technology or any other aspect of contemporary American life? Maybe such candor is too much to ask of a show created for a platform owned by one of the world’s most valuable corporations. Sadly, the alternative leaves us with a commercial for thinking about America more than a complete thought. 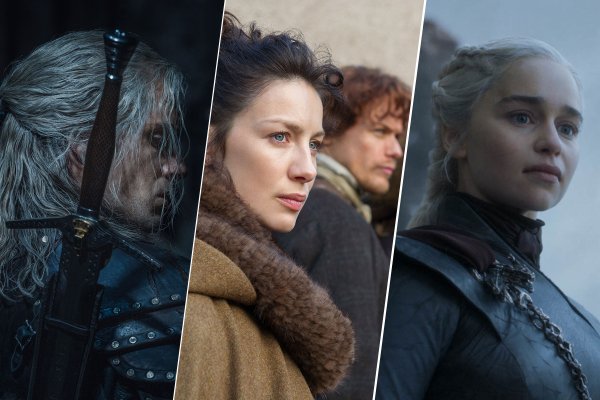 The Best Fantasy TV Show Adaptations
Next Up: Editor's Pick