The idea of edge-of-your-seat movie entertainment is something of an oxymoron, or at the very least an overrated advertising gimmick. While it’s exciting to be scared, great horror movies also depend on the occasional relaxation of tension; that’s what gives them a pulse, and what quickens ours.

A Quiet Place Part II, writer-director John Krasinski’s sequel to his unnerving and effective 2018 film A Quiet Place, is more of a good thing—perhaps too much more. The movie is intelligently conceived, well-acted and nicely crafted. But like any sequel, it’s fixated on upping the ante, and thus pitched at a much higher stress level. It never lets up, which might be great fun for some viewers, though its doggedness also makes it wearying. And in that sense it also betrays the bucolic intimacy of the first picture, a back-to-the-land nightmare stark enough to dissolve any Brooklynite’s fantasy of moving to a small upstate town. Better to stick with your Swedish clogs and Ulla Johnson dresses, and your membership at the food co-op, than to risk the wrath of hungry, countryside-roaming alien beasties with terrible eyesight but supersensitive hearing.

To be fair, in the Quiet Place universe these creatures have taken over the whole world, not just the cute town where the family of Lee and Evelyn Abbott (Krasinski and Emily Blunt) have made their home. A Quiet Place Part II picks up almost exactly where the earlier film left off, though it opens with a flashback detailing the day these nasty critters—invaders with armorlike skin who, when distressed, display fleshy red gills that flare out like the petals of a chrysanthemum—first touched down, more than a year earlier. On that particular day, Lee stops at ye olde village general store for some fruit and water before heading to join his family at the local baseball diamond, where the eldest Abbot, Marcus (Noah Jupe), is just going to bat. A streaky thing explodes in the sky. Chaos and carnage ensue.

Fast-forward to the present: We catch up with Evelyn and her children—Marcus, Regan (Millicent Simmonds), who is deaf, and an infant who has to be carried around in a wooden box (for reasons you’ll recall if you’ve seen the first film)—as they leave the family homestead, ready to face whatever horrors await. Lee is dead, having sacrificed himself to save his family at the end of the first film. But the Abbots have one piece of crucial information in their arsenal: Regan has discovered that she can use her hearing apparatus to create feedback that temporarily immobilizes the monsters, slowing them down so they can be blammed with a shotgun or other weapon. She’s smart enough to know that this trick could end up saving her family at any time; she’s selfless enough to know that it might help others too. But the Abbots are completely isolated, all of their friends and neighbors having been wiped out by aliens.

At least that’s what they think, until they encounter an old pal from the town, Emmett (Cillian Murphy), who has become a bitter hermit after losing his own family. At first he wants nothing to do with Evelyn and her crew. Then he’s guilt-tripped into helping Regan in her search for other survivors. Most of A Quiet Place Part II consists of two stories that run on parallel tracks, dovetailing cleverly at the end.

A Quiet Place Part II is intricate and technically accomplished; its sound design alone is pretty gorgeous. (The studio behind the film, Paramount, was set to release it in theaters just as the pandemic hit; instead of sending it out into the world via streaming, the company held it until it could be seen in theaters, where I’d agree it belongs.) And Krasinski, once again, teases out an overarching vibe of near-despair that’s effective for sure: Even more than the first film, this is a vision of neighborly Americana, shattered. Neighbors are wary of one another, preferring isolation to unity. But in the end, who can live that way? Krasinski insists on a gloomy vision of hope, moving his story toward a cymbal-crash of a conclusion that offers at least a slender ray of optimism.

But he doesn’t tiptoe around any of the horrors this little family encounters along the way, at times flirting with sadistic unpleasantness. One young character, after suffering a grisly accident, screams in anguish—the wailing spirals out in an unavoidable whirl that seems to go on forever. Obviously, this is a great plot device; attracted by the sound, a hungry monster zips over from out of nowhere in seconds, kicking the action into high gear.

And yet, watching kids suffer, or being terrorized excessively, may not be your idea of fun. I can’t say it’s mine. The young actors here are so good that it’s easy to become invested in their characters. Simmonds, who is herself deaf, has the face of a nineteenth-century orphan, one that speaks of care and toil and worry; you root for her every minute, but you also want a childhood for her. And even before the alien invasion, Jupe shows us that Marcus is an anxious kid by nature. As terrible events mount, and his own responsibilities escalate, his face shows just how much anguish he has to bear: he’s wound tight with apprehension, terrified by the mere possibility of a misstep. A Quiet Place Part II is effective, all right—Krasinski holds all the keys to turning us into nervous wrecks by the end. But just because you hold the keys doesn’t mean it’s a good idea to use them all. And a horror movie that gives us space to breathe is also more likely to hit us where we live. 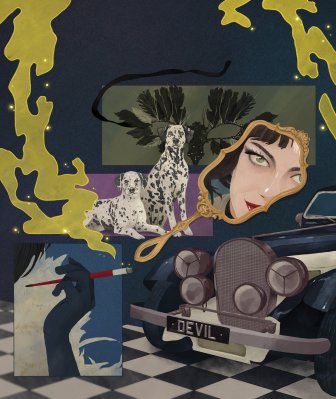 The Problem With Villain Origin Stories
Next Up: Editor's Pick