Wonderstruck Is a Tender and Vital Piece of Filmmaking

Todd Haynes makes films that are tender and vital, with a deep affection for the past that’s never just misplaced nostalgia. He knows it’s a place where real people lived, loved and sometimes suffered. Haynes’ extraordinary new film, Wonderstruck, builds on everything he has done before, but it’s also a crazy leap, a picture that works almost against all odds. Based on a novel by Brian Selznick, who also wrote the screenplay, it tells the dovetailing stories of two 12-year-olds, Ben (Oakes Fegley) and Rose (Millicent Simmonds), living 50 years apart. Ben, growing up in 1977 Gunflint, Minn., has just lost his mother (Michelle Williams) and has always wondered about the father he never knew. His mother refused to answer his questions, and he’s haunted by a recurring nightmare in which he’s pursued by wolves, a sign that his mind is working overtime to make sense of his grief.

Then a freak accident causes Ben to lose his hearing. It also sparks a journey to New York City, in all its perilous ’70s glory, where he makes a new friend, Jaden Michael’s Jamie. He also finds a connection with a girl who, 50 years earlier, felt just as lost. Rose, also deaf, lives in Hoboken, N.J., with her father, a distracted man who can’t be bothered to try to understand her. At one point he tosses her a book on lip-reading, barking orders for her to study it.

It’s filled with tiny print and macabre line drawings, and it terrifies her. She tears a page out and folds it into the shape of a small tower, which she adds to a little fantasy city she’s made entirely out of paper.

Rose also finds solace at the movies. She idolizes the silent-film actor Lillian Mayhew (a luminous Julianne Moore), and in one of Wonderstruck‘s most astonishing scenes, she gazes at the image of this resplendent, expressive creature who speaks a language of silence she fully understands. On the silent screen, Mayhew, who appears to be modeled on Lillian Gish, speaks in an alphabet of broad physical gestures and eyes that reflect anguish or joy like light from a prism. Rose watches, rapt. She learns that Mayhew will be performing onstage in New York City and so she, like Ben, runs toward it.

This is an intricate, high-reaching piece of film-making, and there are places where the mechanics don’t run as smoothly as they should. But the film’s beauty runs so deep, it doesn’t matter. Wonderstruck embraces so many shimmery, evanescent ideas, it’s a marvel that any picture–let alone one you can take your kids to–can hold them. This is a romance of New York City, a love letter to the pleasure of making something by hand, a story of finding the place where you belong and of finding your way to the people who understand you. 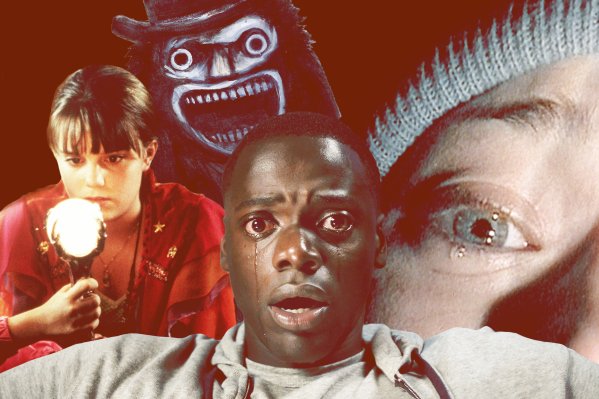 The Absolute Best Halloween Movies of All Time You Can Watch Right Now
Next Up: Editor's Pick