John Krasinski and Emily Blunt on A Quiet Place, Parenting and Their One True Movie Obsession

A few weeks into dating, John Krasinski and Emily Blunt watched one of their first movies together: Jaws. They watched it over and over again, Krasinski says, as many as nine times in the next few months. It wasn’t for the thrill, as Blunt puts it, of “seeing people’s legs get munched off.” What they loved most are its human moments. The one in which Roy Scheider’s defeated police chief is uplifted by a game of copycat with his young son at the dinner table blew Krasinski away. “The fact that in a genuine horror movie, the first big blockbuster in history, you have a scene that is one of the most beautiful parenting moments in film…” He can’t quite find another word for it. “It’s just beautiful.”

A decade, two children and many career-establishing moves later, the pair have made an homage to the movie that helped bring them together. A Quiet Place (April 6), directed and co-written by Krasinski and starring both actors, follows a family trying to survive after an invasion of blind monsters that attack when they hear noise. They live in silence, knowing that the crunch of an autumn leaf could trigger a violent end. It’s a horror movie, a monster movie even, but like the 25-ft. shark off the waters of Martha’s Vineyard, the creatures are peripheral to the human story.

Krasinski is the first to admit that horror is an unexpected direction for his career, not only because he long considered himself “a proud, card-carrying member of the too-scared-to-see-horror-movies” club, but also because it’s so far from his prior credits as an actor on The Office and a director of dramedies. “I don’t think anybody sees my name and goes, ‘That guy—I want to see a horror movie from him,’” he says. For her part, Blunt sat terrified through Scream and “decided never to put myself through something like that again.”

But both felt a visceral connection to this story, at its core a parable for the bottomless dread that comes as part of the package deal of parenting. Their second daughter was 3 weeks old when Krasinski read an early draft. “I was like a wide-open nerve,” he recalls. “You have all these fears of keeping her safe—am I a good enough person to be her dad?” He also saw how his lack of familiarity with horror might actually serve him. He spent a year playing catch-up on the classics he’d long overlooked, paying less attention to conventions of the genre than to what moved him viscerally. “I was my own test audience,” he says.

Blunt felt an immediate pull too. “It sounds like a strange draw, to live out my deepest fears as a mother with two young kids,” she says. “But this was very close to home for me.” Almost too close to home. Krasinski couldn’t picture anyone but Blunt in the role but feared she’d take it only as a favor to him. Blunt wanted in too, but didn’t want their marriage to overshadow the film. (The pair lent their voices to the same animated film and both cameoed in a 2011 Muppets movie but had never appeared onscreen together.) “Everyone was like, ‘You’re gonna be divorced by the end,’” she recalls. “Actually, we’re closer.”

Krasinski was thrilled to cast Blunt—whose next big role is Mary Poppins in Disney’s sequel due on Christmas—from a professional standpoint, because he knew what a big get that is in the industry today. “Not to mention all the stuff I put her through in the movie,” he jokes. “I needed her to really want to do that.” For one particularly harrowing scene, which takes place in a bathtub and is immortalized in one of the movie’s posters, Krasinski says Blunt needed only one take. “She was so unbelievably good that it literally took the air out of the room,” he recalls. And then she turned it off as quickly as she’d turned it on. “As soon as I called ‘cut,’ she was like, ‘What’s for lunch today?’”

Blunt and Krasinski set out to treat each other with the same professionalism they would have brought to any job, but given their offscreen history, she says, “we inevitably have a shorthand that bypasses that diplomacy sometimes.” The secret language that can only result from years of cooking dinner and changing diapers together was particularly useful in a film with no dialogue, save for the sign language the family in the movie learned because their daughter is deaf. So, too, was what Blunt calls “our own beautiful library of memories” of laughing and playing with the couple’s real-life daughters. Drawing upon these memories helped them sell the pain of not being able to share such moments with their onscreen children (played by the wildly talented Noah Jupe and Millicent Simmonds), lest the monsters hear them and attack.

The teenaged Jupe and Simmons, both of whom got their breaks last fall—he in George Clooney’s Suburbicon and she in Todd Haynes’ Wonderstruck—are remarkable here. Both Krasinski and Blunt attribute much of the movie’s success to those actors’ precocious talents. Krasinski credits Simmonds, who is deaf in real life, with gut-checking his take on her character by openly sharing her experiences being deaf in a hearing family. And in discussing the challenges and freedoms of filming without dialogue, Krasinski paraphrases Jupe, who he says articulates it better than he: “You didn’t have anywhere to hide,” the young actor told him. “When you can’t say it, you have to be it.”

An attention to detail was even part of the sound design; Krasinski admits that if not for production deadlines he’d still be plugging away on it: “I’d be through the looking glass, down the rabbit hole and insane.” Many of the ideas he came up with alongside the movie’s sound engineers will be imperceptible to audiences. Crickets, for example, can be heard fluttering but not chirping, because if they chirped, the monsters would attack. That almost no one watching the movie will pick up on this doesn’t matter to Krasinski—he’s tickled just to know it’s there.

But as gratifying as the technical aspects of filmmaking were for Krasinski, he takes most pride in the movie’s heartfelt (if often terrifying) expression of his attitudes toward fatherhood. “My character believed that if he could keep his kids physically close to him, he can protect them forever. That’s what I feel about my kids—the longer I have with them right next to me, I could do it, I can protect them,” he says. “And you realize that is not only not possible, but it’s also not fair. If you want them to be the greatest human beings that they can be, they must take in the world on their own.” We may call it the best horror movie if 2018 so far. But Krasinski calls it “a love letter to my kids.”

A Quiet Place met with a rapturous response at its South by Southwest premiere in March, taking its place in a catalog of recent genre fare, like Get Out and The Witch, that has mined the human condition to chilling effect. Its giant-eared monsters are a blank canvas onto which audiences can project any of the terrors that keep them awake at night—gun violence, rising nuclear tensions, ever more devastating natural disasters. But it’s as timeless as it is timely. Forty years on, you remember the shark, but it’s the tender moment at the dinner table that moves you. “In the best horror movies,” says Krasinski, “the scares are just the backdrop.” 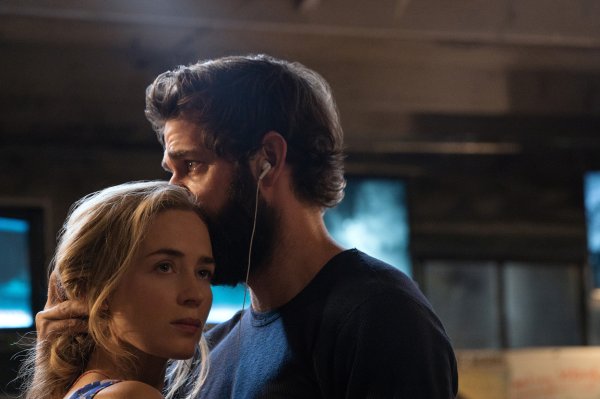 A Quiet Place Is One of the Most Terrifyingly Effective Horror Movies in Years
Next Up: Editor's Pick