In the Michelin roster of pop-entertainment filmmakers, Zack Snyder is the chef who never knows when to stop. If he thinks a dish needs more salt, he adds it not by the pinch but by the bucketful. A little pepper? Somewhere downwind, an entire small country sneezes. Then he pours the whole thing into a cement mixer and something comes out. Sometimes it’s a movie.

Snyder’s new zombie entree The Army of the Dead is too scattershot, perhaps too derivative and definitely too long. But it’s definitely a movie, as well as a perfectly acceptable turn-your-brain-off entertainment. The plot goes like this: After a captive zombie escapes from a military truck, all hell breaks loose somewhere around Las Vegas. An all-out human-vs.-zombie war ensues, which is dramatized, wordlessly, in the movie’s smash-bang opening credits sequence, set to a woozy version of “Viva Las Vegas.” This movie-within-a-movie opener—now a pretty standard approach for Snyder—is perhaps the best thing about The Army of the Dead, a melee of military dudes and dudesses blasting the heads off zombie hordes that include bloodthirsty showgirls dressed in raggedy spangles, flesh-chomping bridal parties and Elvis impersonators on the hunt for some love-me-tenderloin. It’s so good, so self-consciously nuts, that you could probably just stop watching there and be perfectly satisfied.

But of course, there’s more. One of the zombie-fighting dudes we met in that opener is Dave Bautista’s Scott Ward. The zombie war ended when the city of Las Vegas was fully walled off by stacks of shipping containers, trapping all the zombies inside. And even though Scott has been duly decorated for killing a lot of those undead Las Vegans—who were, incidentally, anything but vegan—he’s now flipping burgers in a greasy spoon. Certain events connected with his zombie-killing days have estranged him from his daughter, Kate (Ella Purnell). What was it all for, he now wonders?

Then a most definitely evil casino magnate (Hiroyuki Sanada) approaches Scott with a plan to infiltrate the lost city and retrieve a heap of cash from a giant safe in his casino’s basement. (The plan has to be executed quickly, because the government is planning to nuke the city of zombiefied misfits on a random national holiday that happens to be July 4.) Scott likes the plan. What has he got to lose? So he assembles a team that includes a chainsaw specialist (Omari Hardwick), a crackerjack helicopter pilot (Tig Notaro) and a polite German safecracker who knows his Wagner (Matthias Schweighöfer), and breaches the tinny metal walls of the city—which, it turns out, has now become the kingdom of a higher class of zombies, led by a willful, sinewy king and queen (played, in magnificently physical performances, by Athena Perample and Richard Cetrone).

There’s lots of plot in Army of the Dead: It’s a zombie movie, a heist caper and a sentimental father-daughter reconciliation drama, with dashes of feminist vengeance and furtive-glance romance tossed in. Army of the Dead borrows heavily, and not unexpectedly, from movies we’ve seen before, including everything by zombie maestro George A. Romero—but then, Snyder has already made his own version of Dawn of the Dead, and most of these images have been burned into our collective unconscious anyway. Army of the Dead’s chief flaw is that it’s just too long—too much of its muscle and bone is obscured by flab. Snyder isn’t a particularly thoughtful director, but at his best, he’s a visceral one. It’s too bad this movie isn’t leaner.

Still, his ruined kingdom of Las Vegas, a mad, crumbling city with no memory of its neon past, has a kind of heavily CGI’ed poetry about it. And he does give us one fantastic feline character, a zombie tiger named Valentine, late of Siegfried & Roy’s stage show. A one-eyed gal with dusty gray and red fur the texture of a nailbrush, her ears half-disintegrated into tiny nubs, she prowls her turf with regal furor. Valentine shows up in Army of the Dead exactly as many times as she should, at just the right intervals, proving that when Snyder puts his mind to it, he does have a sense of restraint to go along with his imagination. Our compliments to the chef. 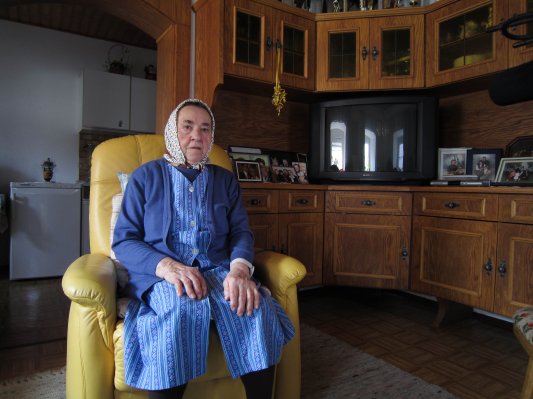 The Unfiltered Nazi Interviews of the Movie 'Final Account'
Next Up: Editor's Pick