Las Vegas is facing a grasshopper invasion of biblical proportions, though fortunately the winged insects are more of a nuisance than a sign of the apocalypse.

In recent days, an enormous swarm of the insects has descended on the city, alarming residents and tourists alike. And experts say that the masses of jumping, inch-and-a-half long bugs may stick around for weeks.

“When we have a wet winter or spring these things build up, often down below Laughlin and even into Arizona, and then we’ll have flights about this time of the year, migrations, and they’ll move northward,” explained Jeff Knight, an entomologist at the Nevada Department of Agriculture, at a news conference on July 25.

On social media, Las Vegas residents have posted videos showing massive swarms of the insects congregating around light sources. Many expressed concerns that the bugs might be dangerous, or asked what might be done to eradicate the infestation.

The creatures have swarmed in such numbers to even appear on weather radar, according to the National Weather Service. The NWS has warned residents to be careful driving, as the jumping bugs may actually limit visibility.

Luckily though, aside from visibility while driving, the winged insects are not dangerous.

“They don’t carry any diseases, they don’t bite, they’re not even one of the species that we consider a problem,” said Knight last week.

According to Knight, the bugs swarming down the Las Vegas Strip are not locusts, but rather pallid-winged grasshoppers, a common desert species. He says he’s seen swarms of this size or larger at least four or five times in his 30-year career. The state has records of such infestations going back to the 1960s.

Knight also says that the bugs probably won’t cause much damage to residents’ yards. If you want to keep them from congregating, he suggests replacing outdoor white lightbulbs with orange or amber lights, which won’t attract the insects.

And for the unfortunate scenario of one of the bugs getting into your car wile you’re driving, Knight says you should remain calm. 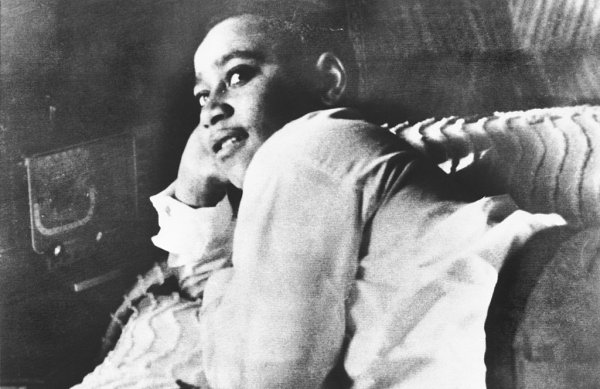 Emmett Till Memorial to Be Replaced With Bulletproof Sign
Next Up: Editor's Pick