The Snyder Cut Is a Better Version of Justice League. But It Sets a Dangerous Precedent

Director Zack Snyder’s cut of Justice League, out March 18 on HBO Max, is way better than the original version released in theaters in 2017. It had to be. The theatrical cut of the DC Comics superhero movie was a dissonant mishmash of two radically different directorial styles that left audiences confused, critics unimpressed and the studio reportedly at a financial loss.

During filming, Snyder left the project after the sudden and tragic death of his daughter, and another director, Joss Whedon of Avengers fame, took over. Whedon reshot much of the movie, and whether by poor communication or studio interference, the plot became incomprehensible—and Whedon sprinkled quips throughout to try to brighten his predecessor’s signature gloomy tone, to the consternation of Snyder’s most devoted fans.

The new cut of Justice League, dubbed the Snyder Cut by fans on the Internet, lasts four exhausting hours. But Snyder uses his doubled run time wisely. Whereas Whedon’s version gestured at vague, tearjerky backstories, Snyder gives each hero personal stakes, particularly Ray Fisher’s Cyborg: his strained relationship with his father becomes the much needed heart of the film. The villain Steppenwolf, too, gets a motive—redeeming himself to his villainous family.

The CGI battles look better, and are longer and bloodier, if that’s your thing. No longer tonally bipolar, the film is one man’s vision, for better or worse. It’s uniformly dark—and not just figuratively: Snyder transformed several daytime scenes into murky nighttime ones. (Points for consistency, if not for visual clarity.) And he has said he is donating some of the proceeds to suicide-prevention programs.

Snyder turned a bad movie into a less bad movie. In a pandemic when blockbusters are scarce, maybe that’s welcome. But the journey here was fraught. A group of fans operating under the banner #ReleaseTheSnyderCut bullied Warner Bros. into giving Snyder $70 million to remake the film. (That’s chump change for a superhero movie, but could have funded a lovely new original film.)

This wasn’t a quaint letter-writing campaign. While some fans innocently used the hashtag in hopes of getting a better movie, a toxic contingent spammed producers, critics and fans of the rival Marvel Cinematic Universe with angry comments and threats. By capitulating to fans who employ dubious tactics to get what they want, Warner Bros. may have set a dangerous precedent. If this is the future of filmmaking, who’s really in control?

Those fans didn’t operate in a vacuum. Snyder encouraged them by creating social media accounts dedicated to what his version would have looked like. He used the hashtag himself, as did stars Ben Affleck and Gal Gadot. Snyder has said he refuses to watch Whedon’s version, and he has maintained that most of his fans—with whom rests the future of his filmmaking career—are not toxic.

Snyder had once been the architect of the future of DC superhero films, an auteur anointed to pick up the mantle from Christopher Nolan following his highly influential Dark Knight trilogy. By the early 2010s, Warner Bros. was playing catch-up to the Marvel Cinematic Universe. Whedon had cemented the tenor of those movies—quip, punch, quip, punch—with the first two Avengers films, in stark and purposeful contrast to Nolan’s self-serious Batman.

Snyder grabbed the football where Nolan left it and sprinted ahead with an even more dour fictional world in Man of Steel and Batman v Superman. The 2014 Lego Movie pokes fun at his and Nolan’s take on brooding superheroes with a Batman theme song: “Darkness. No parents. Super rich. Kinda makes it better.” That’s the essence of every Snyder film. In his movies, Batman’s sole personality trait is anger—that his parents were murdered, that the Joker bamboozled him, that Superman is stronger than he is. Unlike Nolan, who wrestled with political questions in his Batman films—successfully or not—Snyder’s movies feint toward depth.

They have also struggled with critics and floundered at the box office. Warner Bros. has largely scrapped his vision for the future of the DC movies: Superman and Batman are both getting reboots with new actors. DC’s most successful films at the box office, Wonder Woman and Aquaman, boast a decidedly more buoyant tone. Snyder isn’t slated for any more super-hero films and is working on an adaptation of Ayn Rand’s The Fountainhead.

Until recently, Warner Bros. had no motive to release a version of Justice League that sets up future sequels that will never manifest. But those calculations changed with the pandemic, as the company became reliant on its streaming service, HBO Max, rather than on theatrical releases. Debuting the Snyder Cut on a streaming service would create buzz—and recruit subscribers.

It’s easy to see why Snyder’s style resonates with a certain contingent online. Some of Snyder’s fans pilloried Marvel movies and Whedon in particular, claiming those films are “for kids.” (In recent months, several actors, including Justice League’s Ray Fisher, have accused Whedon of bullying on set, adding fuel to the online fire.) By contrast, they believe Snyder offers an adult version of comics—bleaker and bloodier—which justifies their continued obsession with stories they first read in childhood.

The ugliest subset of these fans fetishize the “good old days” when heroes were primarily white, straight and male. Some seek to protect that nostalgic but exclusionary version of storytelling at all costs. Trolls within other fandoms have often deployed the same toxic tactics as the #SnyderCut fans to drive women and people of color offline.

When an all-female Ghostbusters premiered in 2016, fans accused the creators of “ruining their childhood” and drove the movie’s only Black star, Leslie Jones, offline with racist and sexist vitriol.

When Rian Johnson’s The Last Jedi killed off Luke Skywalker, Star Wars fans who had grown up with Luke’s face on their lunch boxes fumed over the decision to backstage older white characters and usher in a younger, more diverse cast; they harassed one of those cast members, Kelly Marie Tran, until she, too, quit social media.

And DC superhero fans tried to file bad reviews en masse to lower the Rotten Tomatoes fan scores of Marvel movies Black Panther and Captain Marvel, forcing Rotten Tomatoes to forbid ratings before a movie debuts. It’s not a coincidence that those were the first solo outings for a Black and a female superhero in that franchise.

These fans have found success: Bomb threats kept prominent female gamers from speaking at events; Jason Reitman is making another Ghostbusters sequel, saying he’s handing the franchise “back to the fans.” And J.J. Abrams largely ret-conned the events of Last Jedi in his follow-up, The Rise of Skywalker, side-lining Tran’s character in the story.

Greenlighting films based on fan campaigns may sound like a democratic way to make movies. But in reality, the power is not with the people but with a small, loud contingent of fans willing to spew hatred. The Snyder Cut, new and improved as it may be, is the latest reward for their bad behavior.

But it’s also perhaps the inevitable conclusion of a saga set amid an industry in which money talks louder than even trolls. Money, of course, can also talk in the form of box-office receipts—which is why, following the success of Wonder Woman and Black Panther, we’re now set to see more of Harley Quinn and a Black Superman movie. If cash is going to set the agenda, let’s hope that agenda at least moves us forward rather than treading in place. 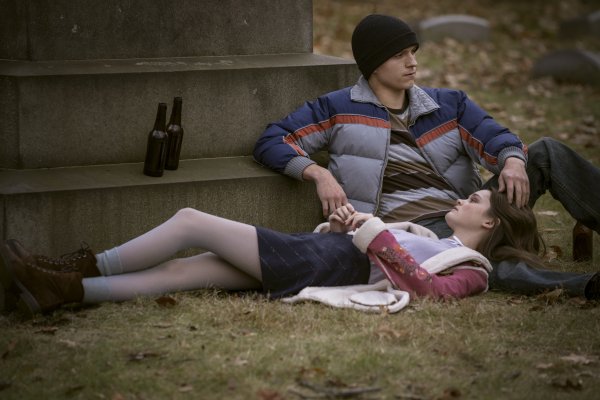 In Cherry, a Troubled Veteran Turns to Drugs and Crime. Everyone—Including the Audience—Suffers
Next Up: Editor's Pick