What do you do when you’ve burned through the novel your TV series is based on in the very first season? Pack up and head to Texas. When HBO’s The Leftovers comes back for its second season on Sunday, the drama based on Tom Perrotta’s novel about the mysterious disappearance of 2 percent of the world’s population moves to a new location and introduces viewers to an entirely set of characters. Justin Theroux returns as Kevin Garvey, who decides to leave the picturesque New York town of Mapleton for Jarden, Texas, the only place in the world where nobody vanished in the “Sudden Departure.” It’s the not paradise he imagines, however.

“People’s problems always go with them, no matter how many miles they fly or drive,” says Theroux, who also wrote next year’s Zoolander 2. “Their psychosis and their faults, that travels. It still feels very much like our show.”

TIME: Which is scarier, the disappearances of The Leftovers or the start of a zombie apocalypse á la Fear the Walking Dead?

Justin Theroux: The former. The unexplained thing is always much more terrifying. We see that when we see planes disappear over the ocean. That’s the thing that keeps you scratching your head or awake at night. When something can be put to bed or rationalized, that’s at least more satisfying to me, in terms of being able to wrap your head around it.

Critics called season one of The Leftovers one of the bleakest shows on television. Where does season two take us? Deeper into the darkness or into the light?

I think [co-creator] Damon [Lindelof] is trying to balance both. There’s weirdly a little more humor, I don’t know if you caught that this season. Not slap-sticky stuff, but it’s there. I think it bites down on some of the more spiritual aspects of grief, of the not knowing. It’s spinning down into this spiritual place, which I find really interesting. It gets a little bit more existential, as far what’s the point or what’s the purpose of life.

I’ve always thought that in order to keep the show going, you have to explore. This is just one part of the show, not the show itself. You have to explore a spiritual element of what people cling to and where they are trying to see in their lives. It has a very agnostic bend to it. It’s not saying one way or the other. It’s people yearning for something bigger.

It’s a hard show to talk about, and it’s not because I’m being coy. It’s something to experience on a visceral level. Whether you attached to what a lot of the characters are going through or not, even in their heightened or extraordinary circumstances, it’s about identification with the feelings, as opposed to the facts surrounding.

The first season of The Leftovers didn’t answer many of viewers’ most pressing questions—to be a fan, you had to be okay with uncertainty. As the show introduces new characters and mysteries, is it easier for you to let go of the “Why?” this time around?

I think it’s always been easier for me. Of course, everybody’s always asking questions about what does this mean, what does that mean. I think [Lindelof] works in symbology. If you watch the show thinking, “I hope the deer gets explained,” you’re going to be frustrated. It’s a different way of telling stories, letting certain images wash over you. It’s the difference between a pop album and a jazz album. You’re not expecting the same breaks when you’re listening to John Coltrane or something like that. The expectation is different.

I like that it’s one of those shows that you can let your imagination do some work, for once. It’s not laid out. Although I will say he does some really artful explaining of the Guilty Remnant this season, a couple things like that. It’s a slow burn. It’s not something that he’s going to explain in the third scene of the first episode. He has other interests.

The first episode of this season opens with a scene from cavemen times and then introduces viewers to a completely different cast and setting. You don’t even show up until very late in the episode. How many people are going to be looking at their remote, wondering if they’re on the right channel?

I’m sure if they check their listings, they’ll know it’s the right show. That’s a perfect example of defying the expectations. I don’t think [Lindelof] is doing it just to stick a thumb in anyone’s eye. I think he’s doing it with purpose, because it’s just a fascinating way to begin a movie. He’s setting up some of the parable that took place however many millions of years ago, then drawing off that and putting contemporary things alongside it. I think that it’s a smart piece of writing. I’ve given up on trying to predict what people’s reactions to anything would be, [but] when I first started that first script, I was pretty riveted from the first couple pages.

How has filming in Texas rubbed off on the production? Enjoying all the barbecue?

It’s beautiful. I love Austin. It’s a fantastic city. There’s an oppressive heat—we’ve been shooting all summer. It’s inescapable. When you’re mostly outdoors, shooting, unfortunately, it doesn’t read, aside from the sweat stains that appear under our arms. I hope that’s conveyed, there’s a kind of a desperation that kind of heat creates, which is really good. I’ve never spent any substantial time here. Now, I get it why people love this city so much. It’s more than barbecues, it’s a really friendly city. People are wonderful here.

Did you follow the conversation last season around violence on the show? Some critics thought the scene where Gladys got stoned was gratuitous violence that wasn’t earned. One even stopped watching after that.

I didn’t pay any attention to people’s reaction to that. But if people want to be parochial, they’re more than welcome. There’s certain things that I don’t like to see. If I’m not interested in something, I just don’t watch it. I don’t think we’ve done anything in terms of violence that Quentin Tarantino hasn’t done or a million people, to extremes. It doesn’t bother me because I actually know it’s pretend.

The first season loosely adapted the book. What’s it like to completely depart from the source material this time?

In the first season, Damon and Tom struck a perfect balance of honoring the book, but not being bound by it—taking certain liberties where it just needed to take liberties. In season two, they’ve uncorked the world in a really wonderful, exciting way. Visually, it’s opened up. Psychologically, it’s more tense, in a way. We’ve gone to this place where ostensibly zero people have departed from. They’ve created a utopia that turns out to not be.

You also wrote the upcoming Zoolander sequel. How immersed in the world of high fashion are you?

I love high fashion. The absurdity of it and the show of it—it’s a hysterical topic. It is one of those things where, at a fashion show, if you step three degrees to your left, it’s the funniest thing in the world. To be able to write for all those characters was thrilling. I mean, essentially, you’re writing to 9 years olds. It’s really fun. I always take examples from fashion shows in New York and Paris. I went to Rome a couple times during the filming, and the contrast between shooting The Leftovers and then jumping over to Rome was huge and really badly needed, fresh air.

How much research do you do? The modeling world is very different place now than it was 2001, with social media and the Instagirls.

The high level of absurdity was still there. When we first started writing Zoolander, I went to Paris fashion week and just did as many shows as I could. Not so much the shows—it was the after parties and the fashion events where you get to see the fireworks really go off. That’s where you can get most of your material.

It looks like there are going to be a ton of celebrity cameos in this. Did you get to hang with people like Justin Bieber or Ariana Grande on set?

I didn’t see Bieber or Ariana. I don’t want to give any away, but there are a couple of unbelievable cameos. I can’t believe we got them, in one sequence in particular. For the first one, they had real trouble [getting cameos] because no one really knew what it was. Now it’s more iconic. We basically got to write cameos with the knowledge that we’re probably going to get them. There was no shortage of people wanting to do cameos.

So the fashion industry is happy to laugh at itself?

Yeah, It’s a beautiful thing. It’s like when you do movies that poke fun at Hollywood. Everyone doesn’t think they’re the person being made fun of. It’s a wonderful sort of, “Ha ha, that’s obviously not me!” But it could be.

Read Next: How Cara Delevingne Went From Model to Movie Star 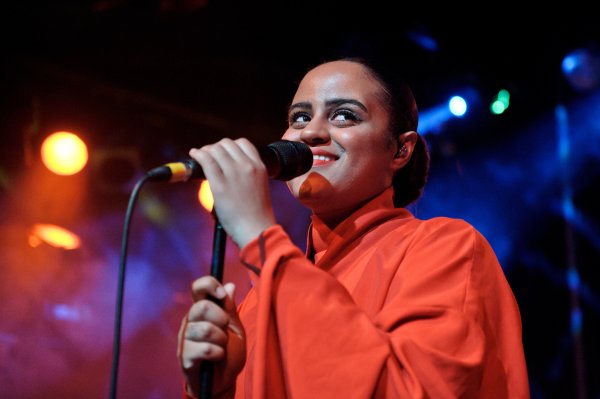 How Seinabo Sey Conquered Self-Sabotage to Make One of the Year's Best Debut Albums
Next Up: Editor's Pick