President Joe Biden walks to the lectern before speaking in Pittsburgh, Pa. on March 31, 2021.
Jim Watson—AFP/Getty Images
By Philip Elliott

President Joe Biden’s massive $2 trillion infrastructure plan carries with it a corresponding tax on corporations that, as introduced yesterday, will be paying for the plan long after the bulldozers go quiet.

The Biden plan would use a full eight years to undertake the most badly needed repairs to roads and bridges, expand meaningful passenger rail beyond the northeast and finally get high-speed Internet to rural areas. It’s a huge plan that would create much-needed jobs right at the moment the U.S. economy is coming out of its COVID-19 lockdown. There are politically popular line items tucked in the bill, like replacing lead pipes that still carry water in communities, and intriguing aspects like a carve-out to improve veterans’ services. The potential for setting the nation on a new environmental course is epic.

But the price tag is obviously hefty and immediately drew concerns — including from some Democrats — about whether we can afford to do so much. Speaking to reporters in Kentucky before Biden’s speech, Senate Minority Leader Mitch McConnell said he was unlikely to support the plan because of “trillions more added to the national debt.”

That’s why Biden added taxes to the bill to pay for the plan, rather than do like Washington normally does: run up the check and leave it for someone else to pay, with interest. In Biden’s plan, foreign corporate profits currently taxed at 10.5% — a new tax introduced in the 2017 GOP tax plan — would face a 21% tax. For domestic corporate profits, the rate would climb from 21% to 28%. (That’s still lower than the 35% rate before the 2017 tax cuts.) Biden also adds a 15% tax on corporations’ fiscal-statement income, in case they use loopholes and incentives to pay less than that. For the moment, things don’t change for individual taxpayers, although there is healthy skepticism that will remain the case.

Even so, the tax hike that analysts say would be the biggest since 1968 remains insufficient to cover the spending in real time. Biden’s plan would spend $2 trillion over eight years, but it would also raise that $2 trillion over 15 years from corporations and the rich. After the thing pays for itself, the taxes would continue and be used to pay down the deficit, the White House argues.

The sums are already eye-popping, but Washington seems to have a loose checkbook in the holster right now. The pandemic all but eliminated the fiscal-restraint evangelists in the conservative caucuses. The liberal wing of the Democratic Party has seized on the moment to do big things only loosely related to the legislation at hand. For instance, Democrats’ latest $1.9 trillion pandemic-relief bill includes $5 billion earmarked for Black farmers and blocks corporations from treating executives’ compensation over $1 million as an expense. After Biden announced his infrastructure plan, Rep. Alexandria Ocasio-Cortez tweeted that the $2 trillion was too little and spread over too much time. She later made the case last night to MSNBC’s Rachel Maddow for a $10 trillion package.

Washington is unlikely to find much common ground on this one. The last pandemic-relief package cleared by the narrowest of margins, with two Democrats voting against it. (House Speaker Nancy Pelosi can lose just four of her own if zero Republicans will join, as was the case in COVID-19 relief. Senate Majority Leader Chuck Schumer cannot afford a single defection among his fellow Democrats.) Republicans signaled they are open to infrastructure as long as it doesn’t flood D.C. with red ink, but also say they don’t like that the dam against that crimson sea is higher taxes.

So it looks like Biden will have to once again pursue this ambitious plan with only his party’s backing. His going it alone makes it very easy for McConnell and his House counterpart, Minority Leader Kevin McCarthy, to fire up ads linking every yay to the giant tax hike.

In reality, Biden’s proposed tax hikes probably should be twice as big. That would cover the cost of this program in real-time. But you don’t need to do the math to realize those rates simply are not palatable right now after a grueling year for a lot of Americans and American businesses.

So instead, the Biden plan spends the money in the first eight years and spends those years and the next seven still paying it back. Biden’s team is treating this like an overdue investment in American’s backbone. But all investments carry risk, and this one is no different. It’s merely a question of whether Americans have the stomach for the uncertainty, scrawled in red ink. 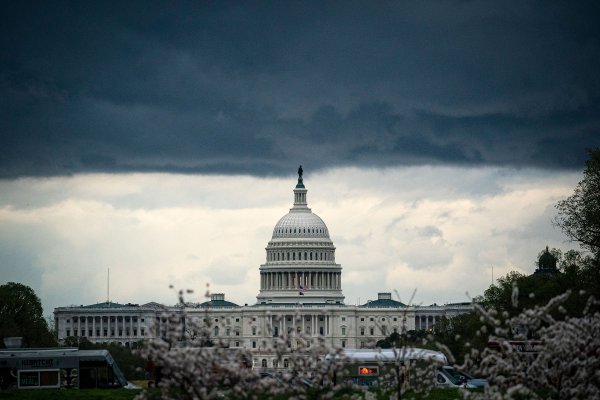 Think the System Is Broken? You’re Not Alone
Next Up: Editor's Pick