Morgan Jerkins delights in finding the fantastical within the familiar. In her new novel, Caul Baby, everyday life takes on a surreal glow: a bodega covertly peddles mystical talismans; a brownstone visibly embodies its owners’ secrets. And on that border between our world and her imagination, fantasy reveals a sometimes harsh truth about reality.

No element of Caul Baby better illustrates Jerkins’ ability to spin magic out of the mundane than the titular caul, the amniotic membrane that surrounds a baby in the womb. In the novel, members of the miraculous Melancon family—three generations of Black women living in Harlem—carry this thin, translucent layer of skin with them throughout their lives. Their cauls provide them with physical invincibility—and, later, income, when they begin selling pieces for profit. The caul’s supposed ability to provide good luck and a defense from evil has a long history in folklore, but Jerkins says the complex, passionate women who produce it in the book are deeply rooted in reality. “I kept thinking about how Black women are supposed to be everything for everyone else,” she says. “Is it too far-fetched to think of Black women healing or protecting, providing to others, when we know they have a legacy of that?”

Caul Baby begins with a Harlem community thrown into flux by a motherhood melodrama. Laila, a local woman who’s suffered several miscarriages, goes to the Melancons to buy a piece of caul in an effort to protect her latest pregnancy. They refuse her request, preferring instead to sell their precious skin to white customers with deep pockets, a practice that builds ire against the family in the rapidly gentrifying neighborhood. When Laila publicly descends into madness after her child is stillborn, the Melancons acquire a baby of their own under hazy circumstances, adding to the ill will. And the child, Hallow, carries a caul.

As the inheritor of that gift, Hallow is hailed by her family as the great hope for their future, but she struggles with the way the caul limits her life—the overt disdain from their community; the loneliness of her existence; the responsibility to provide for her family, as did the women before her, when her body is the commodity. Hallow is physically protected from harm, but at a high price. “Just because someone heals doesn’t mean that they don’t feel pain,” Hallow’s mother Josephine says by way of explanation, not consolation. “We all carry something.”

Jerkins began writing Caul Baby in 2015, shortly after moving to Harlem from New Jersey. That she worked on the novel almost the entirety of her time there is evident in the writing. Landmarks like Amy Ruth’s restaurant and St. Philip’s Church are name-checked, and the vibrancy of the city crowds every page.

“When I moved to New York, my senses ran amok,” she says. “One of the things that fascinate me about Harlem, aside from these rich diasporic communities, is the cacophony, that if you really lean into the sound here, you hear so many different kinds of cadences, different types of rhythms, different types of pulses.”

That feeling made her committed to thinking of the neighborhood as not just a setting but a character. What she saw living there added urgency to that mission. “I knew I wanted to give ode to Harlem in some type of work, but I thought that it had to be this one, because of how rapidly [Harlem] was changing,” she says. “I wanted to have some type of document to memorialize the way that I remember it.”

In early 2020, it seemed for a while that such memorialization would be necessary even sooner than Jerkins had thought. The pulse of New York City seemed to ebb, as the COVID-19 pandemic put a damper on the hard-hit city. Many New Yorkers felt their own versions of the desperation that drives the fictional Melancons.

By the time a new kind of noise returned last summer, with racial-justice protests filling the streets, Jerkins was putting the finishing touches on her manuscript and was reminded once again of the very real feelings she brought to bear on the world she crafted. “What does survival look like for those who are a part of disenfranchised communities?” she asks. “What does it look like for those who are conditioned, [like] Black women, to be the pillars and the lighthouses, figuratively speaking, for everyone else, often at the expense of their selves, their self-autonomy, their individuality?”

Caul Baby is Jerkins’ first novel, though she published two nonfiction books while writing it, 2018’s essay collection This Will Be My Undoing and 2020’s family-memoir-slash-history Wandering in Strange Lands: A Daughter of the Great Migration Reclaims Her Roots. She also worked full-time as an editor and teacher. Since the pandemic began, however, Jerkins has been trying to give self-care as much consideration as carving out time for her writing.

Yet in that homebound moment, she also found that the broad horizon offered by fiction—whether rooted in the bizarre or the banal, or both—was more crucial than ever. “I think it’s helpful to work on fiction in the pandemic, because I want to escape,” she says. “I want my mind to run free as it can—and a lot of times that stretches right into the fantastic, right into the surreal.” 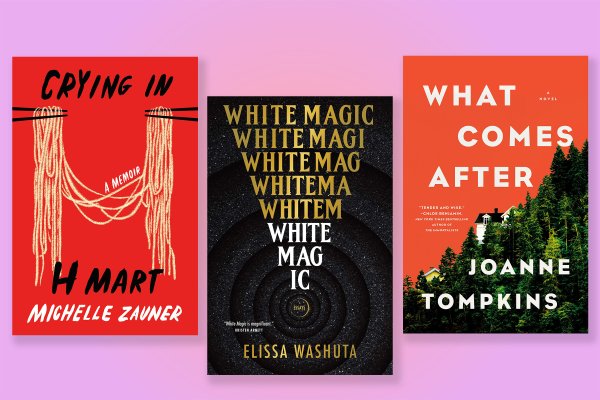 The 15 New Books You Should Read in April
Next Up: Editor's Pick