Author N. K. Jemisin on Race, Gentrification and the Power of Fiction to Bring People Together

N. K. Jemisin is a novelist, but she is also an engineer of worlds and possibilities. In 2018, the science fiction and fantasy author made history when she became the first person to take home the Hugo Award for Best Novel three years in a row, one for each of the books in her Broken Earth trilogy. Jemisin’s fantastical stories are anchored in complex societal systems and fully-imagined new worlds—all with fault lines lying in wait—that aim to help us better understand our own.

In Jemisin’s eagerly anticipated new novel The City We Became, out March 24, the setting is particularly integral to the story. In the book, New York City and each of the five boroughs are made human, embodied by six characters who act as supernatural avatars for each location and use their powers to defend their home from an otherworldly, gentrifying force.

Jemisin spoke to TIME about the systems that shape our cities, writing as therapy and why we need diverse voices in publishing.

TIME: The tone of The City We Became is more light-hearted than much of your previous work, but the novel still addresses serious issues—including the perils of gentrification. Why did you want to tell this story?

Jemisin: I’ve always thought of my writing as therapy. I do have a therapist, but there was a time I couldn’t afford one and writing was the way I vented anger and stress and fear and longing and all of the things that I did not have a real-world outlet for. A lot of times I don’t really understand what it is that I’m trying to cope with until after I’ve finished the book. With the Broken Earth trilogy, I realized belatedly that I was processing my mom’s imminent death. She did pass away while I was writing The Stone Sky. Mid-life crises are not always triggered by getting old, they’re also triggered by an event. And Mom’s death did spur a period of [needing] to grow new things and try new things. I started to think about buying a house. I wasn’t going to be able to buy in Crown Heights, which was the New York neighborhood I had been in, because Crown Heights had hit, like, fourth stage gentrification. Over the time I was here, I watched it change.

Had you seen that shift happen before?

My father’s been in Williamsburg for the last 30-something years. We went from chop shops and brick yards to hipster central. And I was seeing the same thing happen everywhere. The more that I researched, the more I began to realize that something fundamental to the city was being ignored and systematically broken up. As someone who has loved this city and has loved its grittiness and its funk and its strangeness and its wildness, it is being tamed, and I think that’s going to kill it.

How can people avoid contributing to that cycle?

It’s a complex problem. In some ways I am contributing to gentrification, in other ways I am not. I am a black woman who has moved into a black neighborhood, so at least in that sense I’m not contributing. On the other hand, the cost of living is rising and I’m contributing to that. What I’ve tried to do is be mindful of the neighborhood and the culture and the history that I am joining. I’ve joined my block association and I’m trying to participate in whatever activities they’re doing to try to preserve the neighborhood’s character. You have got to become a part of the city for real—in ways that contribute and give back and don’t just take.

During one of the book’s action sequences, Starbucks stores come to life, free themselves from their foundations and attack the protagonists. Why Starbucks?

There is an inherent homogenization that Starbucks represents. Usually it starts with local bodegas where you can get dollar coffees getting replaced with fancier, upscale coffee shops. And as the economic caché of the neighborhood changes slowly, even those independent coffee shops vanish and are replaced—almost to a one—with chain restaurants. It is a perfect emblem of loss and change and slow destruction of the unique culture of the city.

The book is a tribute to communities that thrive because they are multicultural. Was there something about the era we’re living in that spurred you to focus on that strength now?

I am speaking to the political changes that I’ve seen in the past few years. We’re a culture that—at least aspirationally speaking—always prided itself on being a melting pot or a salad bowl, whatever you want to call it. And then suddenly we’re seeing all of that being maligned. It’s not who we’ve always said we’ve wanted to be. We’re losing that aspirational spirit that made us what we were.

Recent missteps by publishers—such as Barnes & Noble and Penguin Random House’s now-cancelled initiative to re-release classic books with “diverse” covers—have suggested that the literary world still has a ways to go before it is truly inclusive. What would you like to see publishers do to address these problems?

First and foremost, publishers have got to do some soul-searching. They keep hiring the same kinds of people. They keep promoting the same kinds of people. They keep trying to sell the same kinds of works. I understand that corporations are naturally risk-averse, but you can’t be risk-averse with art. I would like to see publishers commit to hiring more editors of color, interns of color—everybody at every level. CEOs of color. And not just people of color—people of other marginalized backgrounds, as well. We need disabled writers in there; we need immigrants who have actual experience with the process. The readership is America, and the industry needs to also reflect America.

Systemic oppression is a recurring theme in your work. Is it difficult to revisit those storylines and that pain over and over again?

It’s not difficult—this is my life. This is the world that I know. When I contemplate existential evil, I don’t see some abstract devil, I see people torpedoing themselves just to maintain a status quo and systemic advantages that actually in the long run aren’t helpful for everybody. White people don’t really benefit that much from racism. And the majority of men aren’t benefiting wildly from patriarchy. These are systems that encourage people to act outside their own best interests. We’re perfectly capable as a species of looking at other people who are different from ourselves and understanding that those are other human beings and that they have the same interests and fears and wishes as the rest of us. But these systems discourage that kind of identification.

You once said that artists and creators, especially those who work in speculative fiction, are the engineers of possibility. What possibilities do you hope to engineer with your work?

I would want people to come away from my fiction with a greater understanding of how these existential threats are developing and being artificially encouraged. The consistent theme throughout my work is that these are all societies that could be great, and they aren’t because people gotta be a–holes. That’s really what it breaks down to. There are self-sustaining systems at work which discourage people from working together and doing what is good for all. We can stop those, but it has to be a choice. I want to convince more people to work toward that goal.

That’s a theme in The City We Became, too—people of all backgrounds coming together to make something bigger.

The Fifth Season has been optioned for television. How involved are you in the plans?

Not at all. The one thing I have power over is who I chose to sell my rights to. I’ve consistently tried to sell rights to people who are going to respect the spirit of what I’m doing. I don’t mind if they make changes to the structure. But I don’t want, like, Scarlett Johansson playing any of my characters. I don’t want my characters white-washed. The whole point of what I’ve been writing is the idea that people from different backgrounds are bringing something to the table, and all of that should be respected. 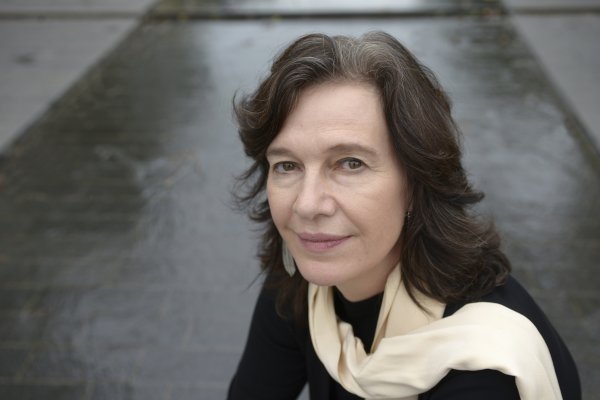 Louise Erdrich on 'The Night Watchman'
Next Up: Editor's Pick