J.K. Rowling attends the European premiere of "Fantastic Beasts And Where To Find Them" at Odeon Leicester Square in London, England on Nov. 15, 2017.
Mike Marsland—WireImage/Getty Images
Ideas
By A.J. Sass
A.J. Sass is the author of the upcoming middle-grade novel Ana on the Edge.

I knew something was off before I’d fully woken up. I shut off my phone alarm and then noticed triple the number of my usual overnight notifications. One name kept appearing: J.K. Rowling.

I didn’t know exactly what she’d said, but a quick trip to Twitter confirmed what I’d already suspected: Rowling had doubled down on her claim that transgender people are confused or misguided about their gender. First, it was a series of tweets. Then, an essay on her website.

Rowling’s views are not new to me. There have been discussions online about her transphobia for quite some time, both public and private. I’ve also seen the breakdown of her concerning portrayal of a transgender woman in the mystery series she writes under the pen name Robert Galbraith—the name she shares with an anti-LGBTQ psychiatrist who practiced conversion therapy.

Problematic? Yes. And personally hurtful, considering her Harry Potter series was a source of comfort to me during the stresses of graduate school. It inspired me to write as a creative outlet, and her novels held a coveted spot in my home—an entire bookshelf dedicated to my original book copies and the foreign-language versions I made it my mission to find each time I traveled abroad.

As an adult, I can objectively look at her comments and reject them as untrue, however painful. But Rowling’s fanbase almost certainly includes transgender and nonbinary youth. And given how quickly online news can spread, these kids are surely aware of what’s being said about their identities.

Publishing has come a long way since I was a child, unable to find stories about transgender and nonbinary kids on the bookshelf. George by Alex Gino, largely acknowledged as the first traditionally published novel geared toward 8- to 12-year-olds written by a trans-identified author, was released in 2015 to wide praise. It was the first time I had read an authentic, sensitive portrayal of a transgender girl, and it opened the door for transgender and nonbinary middle-grade authors, allowing us to tell our stories through the eyes of characters who share our identities.

According to author Ray Stoeve’s The YA/MG Trans & Nonbinary Voices Masterlist, in 2017 one middle-grade book was published that featured a transgender or nonbinary character, written by a transgender- or nonbinary-identified author. There were two in 2019, and four books have been released or are about to be released in 2020 (including my own novel). The number of books with transgender representation rises if you factor in novels written by cisgender authors.

So why do Rowling’s comments about transgender identities matter? They highlight the continued stigma in portraying these characters in children’s literature and come at a time when stories about transgender and nonbinary characters still receive pushback. George is one of the most challenged children’s books in America, and middle schools around the country are censoring LGBTQ novels.

Publishing is steadily taking notice that young readers benefit from sensitive, nuanced portrayals of transgender characters. This representation can serve as a mirror that reflects a child’s own experience. It can provide much-needed comfort. And when famous authors share hurtful opinions about transgender people, stories now exist that can challenge these harmful stereotypes. As support continues to grow for authentic character portrayals, it’s my hope that my phone will ping with fewer problematic opinions and instead be filled with kid-lit recommendations reflecting the diversity that already exists in its readership. 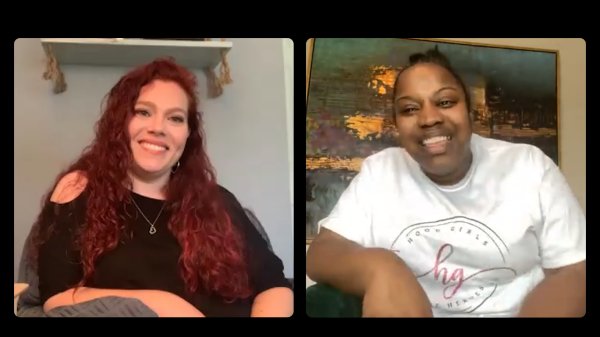 How a Black Woman and a White Woman Co-Wrote About Race
Next Up: Editor's Pick