“First and foremost, I made this film for trans people,” says Sam Feder, the director of the new Netflix documentary Disclosure. “We needed to lay out our story in this way so it could be owned, and I hope trans people feel emboldened by seeing this history, its pain and its complexities told by other trans people.”

Weaving together interviews with trans writers, actors and producers, Disclosure offers an in-depth look at the history of trans representation onscreen, from the early days of moving pictures to recent TV series like Pose that have gained mainstream success. Executive-produced by Laverne Cox, the documentary examines the enduring impacts of problematic and painful depictions from the past as well as examples of the more positive representations that result when trans people gain control over their own stories.

Cox, alongside Lilly Wachowski, Yance Ford, MJ Rodriguez, Chaz Bono and several others share their insights into what films and television series as varied as Paris Is Burning, CSI, Women in Revolt and Dirty Sexy Money have meant to them. “There was something so validating about the roots of this history going so deep, because I’ve felt it in my bones,” says Feder. “It helps you understand why transphobia runs so vast in our society. Every single stereotype and distorted image we see all goes back to saying trans people aren’t real—and it disavows who we say we are.”

Disclosure‘s interviewees explore instances where depictions of “transness” may not be as obvious to other audiences; historian Susan Stryker points to the 1914 D.W. Griffith film Judith of Bethulia, one of the earliest feature-length silent films. Stryker explains the symbolism of one moment in which a gender non-conforming character is shown circling around a decapitation scene, which could potentially suggest the notion of the character being ‘cut’ or castrated.

“I love how Susan Stryker has centered trans people in the history of film, and you just slightly shift the lens and you’re a part of history in a way you’ve never been before,” says Feder. Though Griffith’s racist perspective is well-documented (see: The Birth of a Nation), the fact that he made the gender non-conforming body “the butt of a joke” has been historically overlooked when discussing his work, says Feder.

“I grew up in Brooklyn, and often came home and watched television after school,” says Feder. His memories of these TV sessions often group shows together into what he describes as an “amorphous experience of violence” against trans people. A section of Disclosure is dedicated to clips from talk shows in which interviewers including Jerry Springer, Maury Povich and Katie Couric ask invasive questions that dehumanized trans people in front of large audiences. “The talk shows were relentless—I watched them all, I engaged with them all and they absolutely influenced the way I saw the world,” says Feder.

Set in Northern Ireland against the backdrop of the Troubles, the 1992 film The Crying Game featured a storyline involving a romance between Fergus, an IRA volunteer, and Dil, a transgender woman, played by Jaye Davidson. The film gained critical acclaim and was nominated for six Academy Awards, including a Best Supporting Actor nomination for Davidson. Feder has conflicting feelings about it, saying that while The Crying Game was “a really beautiful, complicated and political love story,” its promotional campaign focusing on “the secret,” referring to the fact that Dil was transgender, and treatment of a sex scene did it a disservice.

In that scene, when Fergus and Dil are about to have their first sexual encounter, the camera pans down to show Dil’s penis. Fergus reacts with disgust, slapping Dil away as he runs to the bathroom and vomits. The interviewees in Disclosure discuss how damaging that reaction was, and how it was echoed in several other films, like Ace Ventura and Naked Gun 33 ⅓, both of which were released in 1994 and treated trans women as punchlines. “That scene has been seared into my memory since,” says Feder.

Based on the true story of Nebraska teenager Brandon Teena, Boys Don’t Cry tells the story of a young trans man coming to terms with his identity and eventually falling victim to a brutal hate crime at the hands of two male acquaintances. Hilary Swank won an Academy Award for Best Actress for her lead role as Teena the following year, and Feder remembers it having a significant impact on him at the time. “It was one of the first times that the mainstream had been engaged with the story of a trans man,” he says. It’s a film that several interviewees refer to in Disclosure, particularly in terms of its violent and visceral nature, and the fact that a Black, male friend of the real life Teena was written out of the story.

“Walking away from that film made me want to dis-identify from any inclinations towards a trans identity. It wasn’t really until I met trans people in real life did I understand; these images informed what I thought trans people were, and they only made me misidentify,” says Feder.

Co-written, directed by and starring Silas Howard and Harry Dodge, this queer buddy comedy premiered to critical acclaim at Sundance in 2001 and became something of a cult classic. Howard later went on to direct episodes of Transparent as well as the 2018 film A Kid Like Jake. “That film was way ahead of its time,” says Feder of By Hook or By Crook. Before making Disclosure, Feder says he wasn’t really paying that much attention to mainstream Hollywood images because of the pain they had evoked during his adolescence and early 20s, and instead looked to independent cinema. “That’s where I feel the most hopeful and excited, for the films and television that trans people are making for themselves and by themselves.”

Laverne Cox in 'Orange Is the New Black'
Netflix

“Orange Is the New Black is fantastic,” says Feder. The series, which ran from 2013 to 2019, followed a cast of characters living and working in a women’s prison and became Netflix’s most-watched original series. Laverne Cox’s role as Sophia Burset, a transgender woman in Litchfield Penitentiary who acted as the prison’s hairdresser, earned her an Emmy nomination, making her the first openly transgender person to receive such a nomination in any acting category. Cox was featured on the cover of TIME for a 2014 story about “the transgender tipping point,” referring to the increased visibility of trans people in media and broader American society.

Feder highlights that Cox’s performance in OITNB wasn’t a singular “point” for trans representation, but a victory built on decades of work by the trans movement and by Cox herself. “What’s largely left out of the mainstream conversation is the fact that we have such a deep and rich history and we didn’t just appear in 2014.” he says.

Directed by transgender Navajo filmmaker Sydney Freeland, Drunktown’s Finest is the coming-of-age story of three young Native Americans on journeys of self-discovery. A father-to-be, an adopted girl and a transgender woman star in the film, which was set on a Navajo reservation. “In terms of the projects I’m attracted to, it’s definitely if there’s an outsider character or a character that comes from a marginalized background,” said Freeland in an interview with High Country News, adding that trans women in film have tended to be depicted as “caricatures as opposed to characters.”

Drunktown’s Finest immediately comes to mind for Feder when thinking about other hopeful projects created by trans people. “It’s a complicated, beautiful film,” he says.

“For the first time, trans people are taking center of their own storytelling,” says writer, actor and producer Jen Richards in Disclosure. Her 2016 web series Her Story did just that—centering on the lives of trans and queer people based in L.A., starring Richards and Pose‘s Angelica Ross. Comprised of six nine-minute episodes, the show portrays the women navigating their careers and love lives. It was also produced on a small budget without major studio backing, and became the first indie web series to be nominated for an Emmy.

“Her Story has a lot of tropes that we see in other films, but it’s done with a certain sensitivity that can only come from a trans person,” says Feder.

A Fantastic Woman, starring Daniela Vega, was met with critical acclaim on its release in 2017. A story of grief and shock, the Chilean film features Vega, a transgender actor, in the role of Marina, a transgender character who is coping with the death of her lover. But Feder feels that the movie, which won the Academy Award for Best Foreign Language Film, was aimed more at cisgender audiences than at trans people.

“I’m often looking at how the public is responding to an image, and that tells me about the state of public consciousness at the time. I found that everything that happened in A Fantastic Woman happened to the protagonist because she’s trans,” says Feder, pointing to one particular scene where Marina is disrobed by a criminal investigator. “The film was not made for trans people; it was made for cis people to feel good about feeling bad for trans people. That’s a lens I’m often pushing up against, thinking about who is this for, and how is it supposed to make people feel and how are people reacting to that feeling. A Fantastic Woman was lauded but it was so disheartening to know that that’s where we still are, that the only access to allyship was through pity.” 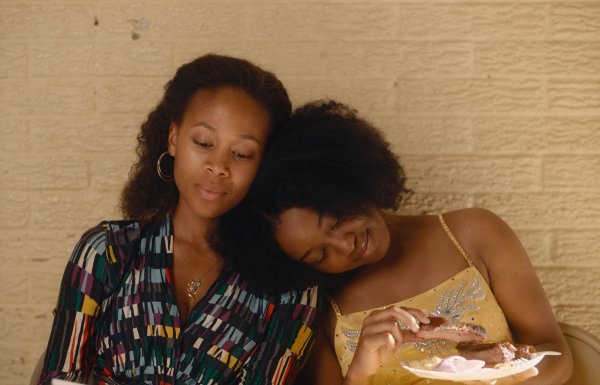 Miss Juneteenth Is a Captivating Mother-Daughter Drama
Next Up: Editor's Pick