Transgender people and their supporters gather in Parliament Square to protest against potential changes to the Gender Recognition Act on July 4 in London
Wiktor Szymanowicz—Barcroft Studios/Getty Images
Ideas
By Juno Dawson
Dawson is a British writer of young adult fiction and non-fiction, including This Book is Gay, Margot & Me, and The Gender Games.

In recent weeks, my DMs have been flooded with messages from well-meaning acquaintances, many asking precisely what was transphobic about J.K. Rowling’s self-published essay, “TERF Wars.” (In summary: a lot.) “TERF Wars” was, coincidentally, the title of a chapter in my memoir, The Gender Games. I wonder if she’s read it?

Her piece contained nothing you wouldn’t find in ‘gender critical’ forums and op-eds: that the freedoms of transgender women impinge on those of cisgender (not trans) women. In subsequent tweets, Rowling also compared trans-affirming healthcare to conversion therapy, and suggested that young trans men are merely confused lesbians. In all this, we are to understand that Rowling is not transphobic, but scared.

Rowling’s words were well-timed to coincide with a governmental review of U.K. legislation which allows transgender people to legally change their gender on their birth certificate. The Gender Recognition Act 2004 was — at the time — progressive, but since then, many countries including Ireland, Argentina and parts of the United States have surpassed it. To get a Gender Recognition Certificate in the U.K., a trans person requires two specialist doctors to diagnose them with gender dysphoria and a mountain of bills to ‘prove’ their identity hasn’t changed over a two-year period. The majority of trans people in the U.K. simply don’t bother.

The Gender Recognition Act never had anything to do with public bathrooms, women’s refuges or changing rooms, however. Trans people can access those spaces—with certain exclusions—under the Equality Act 2010. If the government were to bar trans people from those spaces, they would be rolling back rights we already possess.

Let’s be clear: there is no evidence that trans-inclusive laws lead to a rise in criminality—assaults, stalking or harassment—in single-sex spaces. In 2018, peer-reviewed journal Sexuality Research and Social Policy concluded that “fears of increased safety and privacy violations as a result of non-discrimination laws are not empirically grounded.”

If I’m being generous, I’d acknowledge that the fear is real, if entirely without basis — but it takes a lot of that generosity on my part to do so. After my recent cameo in the BBC/HBO drama I May Destroy You, Twitter users criticized my voice, hands and perceived cosmetic surgeries; there are Mumsnet forums scrutinizing my genitals and calling me a pedophile. I mostly suspect transphobes just think trans people are weird and funny-looking, but they choose to couch their bigotry in a fear of the unknown.

Living in a patriarchy is fundamentally scary for all women. One in four women in the U.K. will be a victim of domestic abuse in their lifetime, and two women a week are murdered by a partner or ex-partner. What woman wouldn’t be terrified? Trans women are at heightened risk: 16% of trans women had experienced domestic violence in the last year compared to 7.5% of cisgender women. (Trans prisoners are ten times more likely to be the victims of sexual assault than the general prison population.) I was a victim in 2017, but even if we don’t personally experience it, I’d argue we’ve all witnessed it – growing up, or in our friendship groups.

Moreover, we know help isn’t coming. Domestic violence is among the violent crimes least likely to be reported to police and, in 2019, referrals to the Crown Prosecution Service fell by 11%.

In her essay, Rowling disclosed she was a survivor of domestic violence and, in her next breath, described her abstract unease at sharing a refuge with a hypothetical trans woman. Why? She was assaulted by a familiar cisgender man, as are the vast majority of domestic violence victims. Across the world, most women are likely to know their rapist at the time of assault.

It’s chilling to think that your friend, boyfriend, husband, or a male family member is the bogeyman. Easier, perhaps, to level your fears at a miniscule minority group. A scapegoat. (And easier still when, as the Netflix documentary Disclosure demonstrates, Hollywood and the wider media landscape has fabricated cross-dressing serial killers for years.)

We must collectively move on from theoretical or philosophical ‘debates’ on this phantom risk. In Britain, Rowling’s tweets gained more media attention than the actual case of Kasabian frontman Tom Meighan who was caught beating his ex-fiancé on CCTV, and walked free from court with community service. While we’re endlessly talking, cisgender men are getting away with violence. Instead, we must focus on provision for survivors — the U.K. government has recently introduced a new domestic violence bill (and provided emergency funding for some domestic violence and sexual abuse charities amid the coronavirus pandemic), but previous austerity measures have severely impacted many refuges and frontline services. Some women are considered too wealthy to apply for Legal Aid despite having their finances controlled by partners.

Like a broken record, there will be transphobic readers who respond here just to say, ‘but trans women are men’. I appreciate I’m unlikely to change your hearts or minds — but know that it’s not us you should be fearful of. We’re terrified too. 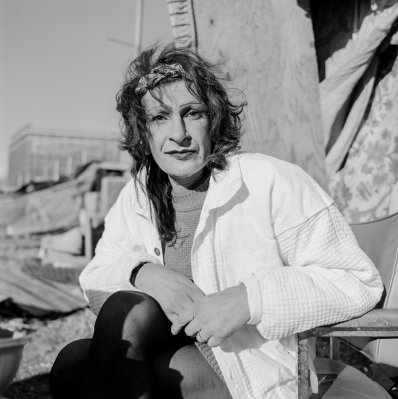 We Owe Gay Marriage to an Early Trans Activist
Next Up: Editor's Pick