As Queen Elizabeth II celebrated the “friendship, spirit of unity and achievements” of the Commonwealth on March 8, Meghan, Duchess of Sussex, and Prince Harry’s interview with Oprah aired in the U.K. that same evening, pointing to the racism Meghan experienced within the institution. Among the revelations were the couple’s descriptions of their treatment by the British tabloid press, the lack of support from “The Firm” to counter racist media narratives and purported concerns from a royal family member over the color of their son Archie’s skin before he was born. But there were many for whom all of this was hardly surprising.

“People felt a silence around racism in the Royal Family was being broken,” says academic and writer Priyamvada Gopal, author of Insurgent Empire: Anticolonial Resistance and British Dissent. “This is a deeply white institution…so for someone who has actually gone into the heart of whiteness as it were, and come out with a story to tell, and the story doesn’t surprise you—I think people will feel vindicated about something that they always suspected, but couldn’t really, in a sense, prove.” On Tuesday evening, Buckingham Palace responded with a statement that “the issues raised, particularly that of race, are concerning,” and that “while some recollections may vary, they are taken very seriously and will be addressed by the family privately.” On Thursday morning, Prince William responded to a question from a reporter, saying that he had not spoken to his brother since the interview, and that the Royal Family is “very much not a racist family.”

The entire situation has struck a nerve with many people of color in Britain and beyond, for whom Meghan’s experiences of insidious and blatant racism are all too familiar. It has also led to renewed interrogation of the Royal Family’s relationship with race, empire and the Commonwealth of nations where the Queen is still head of state. The monarchy has been shaken, but remained intact, by other major events involving newcomers to the family, such as the abdication crisis of 1936, and in more recent memory, Princess Diana’s explosive 1995 Panorama interview with Martin Bashir.

But public opinion matters deeply to the Royal Family, and the interview painted a damning portrait of an institution that has attempted to modernize itself in recent years with the coming of age of a younger generation, including Harry and his brother, William, the Duke of Cambridge. For Gopal and others, Meghan and Harry’s story is just the latest chapter in the monarchy’s refusal to grapple with issues of race—previous racist comments by Prince Philip have not sparked this kind of public discussion and have largely been written off by the British media as “gaffes.”“This is not a family that has made any kind of engagement with Empire or race, still less its own whiteness. And I think that’s what we’re seeing come to the fore now,” says Gopal.

Colonialism and the Commonwealth

Historians say that today’s monarchy and the public image of the Royal Family largely originates from the way Queen Victoria projected an image of her family. Her reign was also an Imperial one; by the end of her time on the throne in 1901, the British Empire spanned about 20% of the Earth’s surface, and almost 25% of the world’s population was under the rule of the “Queen Empress.” The earliest royal tours of the Empire took place during Victoria’s reign, as her sons were sent to visit the nations of the Empire to “build a rapport between the monarchy and the ordinary people across the Empire,” according to historian Priya Atwal, who is based at the University of Oxford and is the author of Royals and Rebels: The Rise and Fall of the Sikh Empire. Such trips to countries of the Commonwealth have continued to the present day, including the Australia and Africa trips that Harry and Meghan referenced in the interview with Oprah.

The concept of the Commonwealth was formalized in 1926 with the signing of the Balfour Declaration at the Imperial Conference, attended by the leaders of Australia, Canada, New Zealand, South Africa, India, the Irish Free State and Newfoundland. Over the course of the 20th century, as former colonies across Asia and Africa fought for their independence from an Empire that had long subjugated them as part of an institutionalized racist hierarchy, the Commonwealth expanded and included this postcolonial network of nations. Today, the Commonwealth is an international organization comprising 54 nations across the world encompassing 2.4 billion people, with the Queen as its head, working to promote “development, democracy and peace”.

“If we look to history, we can see how the royals have a complex relationship with people of color, because throughout the last decades, it’s visits to the Commonwealth where the monarchy has felt most popular, and most loved,” says Joanna Lewis, professor of history at the London School of Economics and author of Empire of Sentiment: The Death of Livingstone and the Myth of Victorian Imperialism. Despite the troubled and white supremacist history of the British Empire, the Queen is largely a beloved figure across the Commonwealth and enjoys high popularity ratings within Britain itself, and in the interview, Meghan only had praise for the monarch too. Meghan also referred to the role she would have liked to continue playing as a working royal, representing the diversity of the Commonwealth and its populations of color as a biracial woman herself.

Queen Elizabeth II pauses for a word with local inhabitants in Tortola when she and the Duke of Edinburgh visited the British Virgin Islands as part of the Silver Jubilee tour of the West Indies, Oct. 1977
PA Images/Getty Images

Yet the Commonwealth is not without its critics, with some experts and commentators calling it irrelevant, “Empire 2.0,” or only serving the purpose of elites within its member nations. Last year, Barbados announced its intention to remove the Queen as its head of state to “fully leave our colonial past behind,” Prime Minister Mia Mottley said. For some, the Commonwealth is an example of changing the name to change the brand, with the brand being the British Empire with the monarch at its head. “We still have Asian and African countries, largely poor, largely not having had any reparations from either slavery or colonialism, not even an acknowledgement of how damaging enslavement and colonialism were,” says Gopal. “It’s time to examine exactly what the Commonwealth means, and I would say that that applies to Harry and Meghan as well, because they’ve treated the Commonwealth as some kind of very innocent institution, and it’s not an innocent institution.”

Academic and activist Kehinde Andrews, who authored The New Age of Empire: How Racism and Colonialism Still Rule the World, argues that nothing has really changed in terms of the structures of power that dictate global inequality. What has changed is the way racism is enacted. “It’s not like the violent way it was back in the day when Elizabeth I was launching slave ships,” he says. And in a way, this more subtle racism relates back to the situation that Meghan experienced as part of the institution of the monarchy itself, he says. “The whole thing from start to finish is a good example of how racism is hidden. This is probably the first time the monarchy has been publicly challenged on racism, certainly in my lifetime. That is insane when you think about it given what it is, where it got its wealth from, its history, and its legacy.”

The couple’s wedding in 2018 was heralded by many in Britain as a celebratory moment for the representation of people of color in the heart of the country’s establishment, but came with mixed feelings or skepticism for others. Andrews was in the latter camp. A professor of Black Studies at Birmingham City University, he recalls writing at the time that the wedding was not the moment of progress it was purported to be, partly because many Black people in the U.K. didn’t feel connected to Meghan at all; not only because she is American but because of the privileges she brought with her to the palace, as a wealthy, light-skinned biracial woman who would be marrying into the Royal Family.

But after the increasingly negative press Meghan received after the wedding, including racist headlines that fueled even more racist comments online, Andrews says more Black people started to identify with Meghan because of those common experiences. The allegations in the interview about “concerns” over Archie’s skin tone, as well as the lack of support from the institution over both the media hounding and security detail, too echoed the experiences of many Black people who don’t receive institutional support across the board in the U.K., whether that’s in the workplace or the palace, says Andrews.

“This idea of being alien, left outside and by yourself and the negative effects that it has on your mental health has made her a really sympathetic figure to us,” he says. “She’s a really good example of modern day racism, where no one is calling you the N word, but you have to argue that [microaggressions are] racism,” he says. He’s spent much time in the days following the interview having to explain why the treatment Meghan received was racist to others who have denied that experience.

Gopal, a professor of postcolonial studies at the University of Cambridge, says the situation has also resonated with people as it shows how insidious racism can be—at the family level, at the social level, and at the institutional level. All three are operative in this particular case, she says. “The bottom line is the monarchy is an institution that is completely tied up with the ideology of blood and bloodlines. And so is race,” she says. “That is the boil that has been lanced open. This isn’t about whichever family member it was, it isn’t about their personal racism—we’re talking about an institution that is deeply tied up to both Empire and white supremacy.” 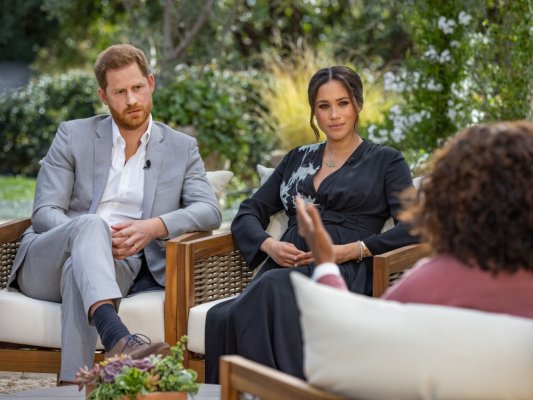 Meghan and Harry: Racism Drove Us From Royal Family
Next Up: Editor's Pick