Why a Royal Meghan Markle Matters

When the British press takes notice of a budding royal romance, there is usually a familiar theme. They spot the couple “getting flirty” at a polo match, for example, or leaving a nightclub in the early hours. But when it came to Prince Harry’s relationship with Meghan Markle, the first clue that there was something different was the tabloids’ unfamiliar, almost cryptic reaction. His new girlfriend was described as a “glamorous brunette” who was “something of a departure from Prince Harry’s usual type.” Markle, the public was told, was “not in the society blonde style of previous girlfriends.” This language was code for something the press was simultaneously obsessed with and uncomfortable addressing directly: Markle is a woman of color.

Some references were less covert than others. A few were blatantly racist. Markle, who grew up in Hollywood and went to private schools, was referred to as “(almost) straight outta Compton” by one publication. Her family didn’t escape notice either. “Miss Markle’s mother is a dreadlocked African-American lady from the wrong side of the tracks,” wrote another publication. Her mother is a social worker and yoga instructor.

Markle had embraced her identity as a “strong, confident mixed-race woman” long before her engagement was announced, but her arrival in the British public’s consciousness was accompanied by a complex—and at times subtle—mix of romantic fairy tale, change of tradition and racial slur. Her heritage continues to attract immense attention from the public and press, partly because it is such a visible departure for a British royal. At the same time, there has been an aggressive tendency to pretend that nobody notices her race. Instead, the only reason for any hesitation about Markle stems, some in the commentariat claim, from the fact that she is American, an actor, or divorced, or that she went to Catholic school.

It all made for an uncertain prelude to a wedding that turned out to be an extraordinary celebration of inclusion, a sun-splashed day that lifted the millions watching into what felt like a new realm. The Reverend Michael Curry, the first African American to serve as presiding bishop of the Episcopal church, quoted Martin Luther King—“Love is the only way”—in a rousing 14-minute sermon firmly rooted in the tradition of the African-American church. A gospel choir performed Ben E. King’s “Stand by Me” under the direction of a black British woman, Karen Gibson, and 19-year-old Sheku Kanneh-Mason played a cello solo in a ceremony did that double duty as both a showcase of black culture and an announcement of generational change. It felt like a powerful statement—in full view of the world—that both celebrated Markle’s heritage and placed it unapologetically at the heart of Britain’s most elite institution.

Even before they exchanged vows, Harry and Meghan were a metaphor for the state of multicultural Britain. For some black Brits, there was a sense of pride that a woman of color has joined the royal family. For others, the union is yet another reminder of deeply entrenched class prejudice and tradition.

Markle was not born into poverty, but neither has she lived with aristocratic privilege. Her career and relationships both appear to have stumbled and then succeeded through a combination of merit and luck. She built an acting career and embraced her interests, using her platform to champion causes like feminism and the environment. She also happens to be marrying Prince Harry, the fun-loving and somewhat renegade royal, who has landed in trouble in the past. But his recent charity work and openness about his struggle with mental-health issues has endeared him to a public hungry for authenticity.

Wrapped up in all this is the question of the British dream—whether such a thing exists, and if it does, what it means for a class system that is anti-meritocratic and socially immobile at its roots. And wrapped up in all that is the changing racial and cultural makeup of Britain. The latest census data revealed that people who are, like Markle, biracial are the fastest growing demographic group, with the number of people of mixed heritage almost doubling between 2001 and 2011.

Which brings us to the wedding. The historian Eric Hobsbawm, analyzing the “secular magic of monarchy,” suggested that while it’s tempting to ask what role a royal wedding plays in a time of social change, it is often because of that change that the weddings have such significance.

It is the perfect stage for a drama that brings together Britain’s love affair with its tradition, in the figure of Prince Harry, and the symbol of its future, in the character of a brown woman.

Rather than reject the monarchy, the couple are participating in its greatest contemporary act of renewal, by marrying with a huge amount of pomp and circumstance in a ritual seen by millions.

To be biracial—or mixed race, as it is more commonly known in the U.K.—was not always a talked-about phenomenon. Growing up in Britain in the 1980s and ’90s with, like Markle, a mother of African heritage, I was acutely aware of my visible otherness, especially in a society that was highly racialized but also deeply uncomfortable talking about race.
Britain is a cluster of islands populated by immigration. But the diaspora stretches back so many thousands of years that few Brits imagine it this way. Most are unaware that groups now considered indigenous, like the Angles and Saxons, were themselves migrants in the first millennium A.D. Their presence is predated by people of color, including ­Africans who have lived in Britain since at least the Roman times.

Many contemporary black British people trace their family history to the British empire, and especially the period of mass immigration shortly after World War II. The changing face of Britain’s communities during the 20th century was an integral part of its postwar renewal, and yet it created a hostile backlash that still reverberates today. It’s a hostility that many British people of color perceive instinctively in the political debate that has weaponized immigration and one that is rooted in the idea that Britishness is at its core a white identity.

The royal family has not traditionally been an agent of change in this respect. During my childhood, the spectacle of an exclusively white monarchy and aristocracy helped reinforce the notion that Britishness was white. It was taken for granted that the royals appeared to make up a deliberately, permanently, white institution. Their main role in my life was to make me feel excluded from the country.

I was not alone in feeling this way. “The royal family don’t stand for us. They never have,” says Candice Carty-Williams, author of a forthcoming novel, Queenie, which has already been referred to as the “black Bridget Jones.” “Black people would have been slaves to them. They are not friends with any of us. When we watch The Crown or Downton Abbey, there are never any black people. There is a history of them not having any interest in us.”

There is discernible weariness among some black British people that the idea of a biracial woman’s joining the royal family would make any discernible difference to race in Britain, where the odds remain stacked against people of color. Forty percent of families from black African and Caribbean backgrounds live in low-income households in Britain, compared with 19% of white families. Twenty-three percent of young black people and 25% of young Bangladeshi and Pakistani youth are unemployed, more than double the number of white job seekers of the same age. And there is some evidence that these figures are getting worse.

Others, however, regard the royal family as a symbolic institution, where the visibility of a woman of color in a position of such status sends a powerful message. “Black excellence in the royal family is a cool idea from a contemporary point of view,” says Lola Adesioye, a British writer and journalist, who is based in the U.S. “How did this girl—who is not only of color, but didn’t go to the same schools or universities as the royals, who wasn’t even raised in the U.K., and so has all these points of difference and otherness—get to this place? It says a lot about diversification.”

Either way, this royal wedding has triggered a debate about black British people. TV networks, newspapers and magazines traveled to Brixton, Coventry and Nottingham—parts of Britain with a historic black community—to ask how different generations of black British people, with their own very different experiences of empire and identity, feel about the state of the nation.

There is recognition too, in some cases for the first time, that black Britain is a complex society with no single story or voice. Even those who are skeptical about the institution of monarchy expressed an interest in this wedding; on social media, thousands expressed their changing view of the tradition-bound royal family. “Making my beautiful mixed heritage family’s shoulders stand a little taller,” tweeted British lawmaker David Lammy. “Against the odds a great new symbol of all that is still possible and hopeful in modern Britain.”

This is not the first time there have been black people involved in or closely associated with the royals. The Queen’s equerry major, one of the most senior members of the royal household staff, is now for the first time a black man, Nana Kofi Twumasi-Ankrah. Other people of color have married into the aristocracy, including the Viscountess of Weymouth, Emma Thynn, whose father is Nigerian. And there are credible theories that at least one and possibly two previous English queens may have had African heritage.

But this is the first royal wedding in Britain where racial difference has played a visible role, with a bride who has owned—rather than sought to downplay—her black heritage. In his sermon, Curry directly referenced slavery, addressing the fact that throughout history, love has transcended social boundaries. “We must discover love, the redemptive power of love,” Curry said, returning once more to the words of Martin Luther King Jr. “When we do that, we will make of this old world a new world.” And at the seat of the British establishment on May 19, Markle seemed more than ready to bring the monarchy into a new era.

Hirsch is a journalist and the author of BRIT(ish): On Race, Identity and Belonging 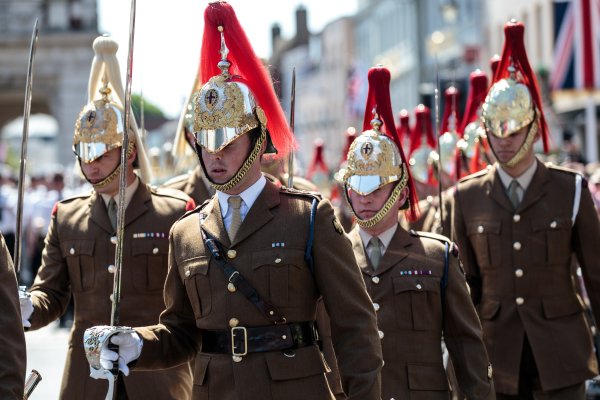 Check Out the Royal Wedding Dress Rehearsal In All Its Glory
Next Up: Editor's Pick