“Tell me what your intention is, and I’ll tell you what my intention is, and let’s see if we can align those two.” That, Oprah explained Monday on CBS This Morning, is what she says to everyone she interviews before the cameras start rolling. In this case she was, of course, referring to the conversation with Prince Harry and Meghan Markle, the Duchess of Sussex, that filled a two-hour primetime slot on the network the previous evening. The special drew 17.1 million American viewers in early ratings that, as Deadline pointed out, add up to a larger audience than last week’s Golden Globes and September’s Emmys combined.

While Oprah‘s collaborative approach to shaping interviews has its limitations—you wouldn’t want to see an investigative reporter compare objectives with the subject of a damning exposé—it proved to be a singularly effective way into the ongoing Harry-and-Meghan saga. The couple broke their dignified silence about their reasons for stepping down as senior royals and leaving the UK in an equally dignified special that riveted viewers, revealed troubling new details about behind-the-scenes machinations at Buckingham Palace and supplied a powerful counter-narrative to the one the Firm and British tabloids had been pushing. Also on This Morning, Tina Brown called the program “kryptonite” to the royal family: “It’s like a hand grenade.”

Although Oprah—whose production company Harpo produced the special and licensed it to CBS for a fee reported to be in the $7-9 million range—certainly made it look that way, taking control of the public narrative couldn’t have been easy. Even compared with its treatment of outsiders who’ve married into the royal family in the past, the UK press has been brutal in its coverage of Meghan. In a one-two punch last week, a dispatch from the Times of London claimed that Meghan had bullied and humiliated aides, driving two of them to resign—and the Palace announced it was launching an investigation into that alleged behavior. Sunday’s interview cast doubt on not only that story, but also just about every story that might have originated with the royals. Harry and Meghan described an “invisible contract” between the Firm and the media, in which the tabloids and their reporters are wined, dined and welcomed into the Palace for holiday parties to encourage favorable coverage.

It all sounded pretty sinister. But it’s worth remembering that, for their part, the couple also has a cozier relationship with Oprah than most subjects have with the journalist who’s profiling them. The difference—in this case and in the case of everything that was ingenious about Sunday’s special—was in the framing. Whereas the faceless Firm came off as having manipulated the media in unseen and thus unknowable ways, in a depiction that jibes with the portrait of the House of Windsor painted by Netflix’s mega-popular The Crown, its exiles seemed to have nothing to hide. Oprah didn’t just disclose to viewers that she knew Harry and Meghan personally; she opened the interview by reminiscing with the duchess about the experience of attending their wedding. The distinction isn’t between objectivity and bias; it’s between transparency and opacity.

In many ways, what we witnessed was Oprah’s understanding of a shift in how credibility is established in the present vs. how it was established three generations ago, when the Queen was a newlywed. The young Elizabeth waited out bad press, trusting that her refusal to enter the fray would ultimately vindicate her as the bigger person. But we are in a moment when skepticism of the media is at an all-time high, the public is savvier than it has ever been about how public figures manufacture their images and top-tier celebrities like Beyoncé prefer to communicate with fans via social-media channels they can control. And Oprah appeared to realize that the value of an open conversation on primetime, broadcast television was in the ability to create the impression (one that, for the record, I see no reason to doubt) that Meghan and Harry weren’t spinning the facts so much as they were clearing the air—air that the Firm would, for reasons implied to be selfish, if not malicious, prefer to leave murky.

For viewers who feel entitled to know every detail about their favorite celebrities’ lives, and for whom openness is a prerequisite for loyalty, transparency worked. That was due, in large part, to the power of the story Meghan and Harry had to tell as well as to their unprecedented eloquence and candor on issues of race and mental health. But you can’t underestimate the importance of how that story was told—that is, how Oprah managed to align her intentions and those of her subjects. Along with being two of the most famous people on the planet, she and Meghan were, after all, two women of color discussing racism, gaslighting and other third-rail topics in front of an audience of millions. From the tranquil outdoor setting of their socially distanced conversation to the outfits they chose (a flowy floral for the radiantly pregnant Duchess of Sussex, a muted mauve for the Queen of All Media) to the calm tone all three participants adopted, every part of the special felt intentional.

For a world of Crown fans, who we know were on Oprah’s mind because the show came up in the interview, it all contributed to a conclusion to this particular episode of the British monarchy that couldn’t have been more familiar: an institution that digs in its heels at any sign of progress or accountability (see: Prince Andrew) doesn’t slow the march of time. It becomes an artifact. 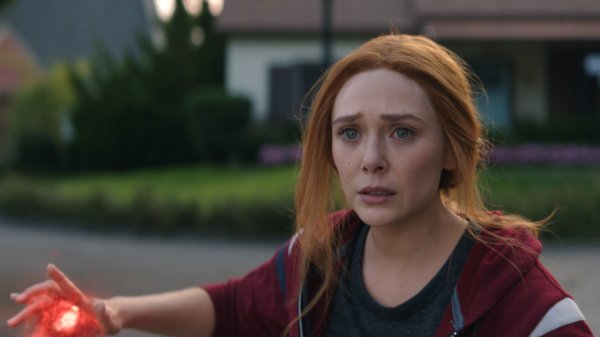 Here's What's Next for the Marvel Cinematic Universe After WandaVision
Next Up: Editor's Pick