'We Did Our Part.' Impeachment Manager Joe Neguse Reflects on Donald Trump's Acquittal

It’s an icy Sunday morning in Washington, less than 24 hours after the Senate voted to acquit Donald Trump in the unprecedented impeachment trial of a former president, and Representative Joe Neguse is trying to figure out what it all means.

As one of nine House impeachment managers, Neguse prosecuted the case against Trump. Today, sitting in his Capitol Hill office in jeans after four grueling weeks of little sleep, he’s still processing the outcome. “Am I disappointed that we weren’t able to secure the sufficient number of votes to convict? Of course,” Neguse tells TIME in his first in-person interview since the verdict. At the same time, he knew the outcome was all but pre-ordained. “Many of the senators made very clear their view, long before the trial even commenced, that they had no plans to convict,” he says. “So for me, the surprise of the trial was the senators who chose to cross party lines and ultimately voted to convict.”

The vast majority of Americans believe Trump was at least partially responsible for inciting an insurrection on Jan. 6, when a group of his most fervent supporters—spurred by his lies about election fraud—stormed the Capitol on the day Congress was certifying Joe Biden’s victory. Neguse’s job was to try to hold Trump accountable while creating a public record of the assault.

In the end, Trump was acquitted for a second time. But the way the trial unfolded left Neguse hopeful. While most Senate Republicans argued it was unconstitutional to try Trump after he left office, seven voted to convict him—10 shy of the number Neguse and his team needed, but still the most senators ever to vote to convict a president of their own party. “It is clear to me that history will not look kindly on his conduct, or those who enabled it,” Neguse says. “We did our part.”

The ignominious end of the Trump presidency was also a breakout moment for Neguse, 36. Until the trial, the sophomore Democrat from Colorado’s 2nd District had been little-known nationally. Neguse, the son of Eritrean refugees and the youngest impeachment manager ever, impressed colleagues and viewers at home alike with his eloquent speeches and poised delivery at the trial, earning praise from both sides of the aisle. His performance even evoked some comparisons to the 2004 Democratic National Convention speech that propelled future President Barack Obama onto the national stage. (It’s a comparison Neguse would surely appreciate: he has more than one photo of himself with Obama displayed in his office.)

Toggling between deft legal analysis and soaring rhetoric, Neguse argued an emotional, high-stakes case without ever seeming antagonistic or disheartened. “Joe’s family is recent enough to America that he could talk about our country as a miracle to behold for people coming here from oppressive circumstances around the world,” says Maryland Representative Jamie Raskin, the lead impeachment manager. During his closing statement for the prosecution, Neguse made an earnest—if futile— appeal to the patriotic ideals of the Senate, refuting Trump’s lawyers’ assertion that the impeachment was motivated by “political hatred.”

The assignment was personal for Neguse. He was on the House floor Jan. 6 when armed rioters stormed the building. He says he felt an acute danger of being a Black lawmaker as a mob that included white supremacists breached the Capitol brandishing Confederate flags. Alarmed, he sent a text to his wife as he was being evacuated, telling her and their two-year-old daughter he loved them.

Less than a week later, Neguse got a call from House Speaker Nancy Pelosi asking him to be an impeachment manager. In some ways, he was a natural choice for the role. Neguse was a lawyer before he was elected to Congress in 2018, leading Colorado’s consumer protection agency and then working in administrative law in private practice. He served on the House Judiciary Committee that in 2019 wrote the articles of Trump’s first impeachment, charging him with abusing his power in pressuring Ukraine to investigate Biden.

Neguse and the eight other Democratic managers knew what they were up against. No president has ever been convicted in an impeachment trial. Convicting Trump would have required 17 Republicans to join all 50 Democratic votes in the Senate. In Trump’s first trial, just one Republican voted to convict.

To woo the jury, the Democratic managers refrained from attacking Senate Republicans for going along with Trump’s spurious “rigged election” claims. They built their case by showing graphic footage of the Capitol attack and connecting it to Trump’s lies about election fraud, his violent language and his refusal to quickly condemn the rioters as they marauded through the building. “There was no ego,” Neguse says of the strategy sessions with the managers.

As the Democrats prepared, Neguse holed up in the managers’ office near the Senate chamber and worked late nights in his Washington apartment. Every evening, he would FaceTime his wife and daughter in Colorado, order dinner around 11 p.m., and keep drafting until the early hours of the morning, revising his scripts in consultation with the team’s constitutional lawyers. His diligence did not go unnoticed. “I think he has read more than anybody on our team in terms of the history of impeachment trials,” says Raskin. “He was ready for everything.” For example, Raskin recalls, Neguse predicted that Trump’s lawyers would try to deflect from the insurrection by focusing on unrest stemming from Black Lives Matter protests last summer.

Neguse says he always believed the case was winnable, but felt his first real glimmer of hope during a vote on the first day of the trial, when Republican Senator Bill Cassidy of Louisiana unexpectedly voted with all Democrats and five other Republicans for the House managers’ position that holding an impeachment trial for a former president is constitutional. Cassidy’s vote “was a momentum shift, and all of a sudden signaled to the country—to us—that there were senators who are listening,” Neguse says.

Still, throughout the five-day trial, there were only a handful of Republican senators who appeared seriously undecided. Neguse trained his sights on one long shot in particular: Senate Republican Leader Mitch McConnell, who had told members of his party that the vote would be a matter of conscience. Neguse targeted McConnell in his closing argument, invoking the names of two of McConnell’s home-state political heroes—Henry Clay and John Sherman Cooper—and referencing a principled vote McConnell cast early in his career against South Africa’s apartheid despite the wishes of then-President Ronald Reagan.

In the end, McConnell voted to acquit, arguing the trial was unconstitutional. But he blasted Trump in a speech afterwards, calling the former president “practically and morally responsible” for the deadly riot. Once again, Neguse was caught between disappointment and satisfaction, wrestling with whether he could have done anything more. “I think his speech makes clear,” Neguse says, “that we proved our case.”

With the trial over, Neguse will return to representing his constituents in a very different way. Colorado’s 2nd District is 50% public land, and at the end of a nearly hour-long conversation, he became animated in discussing the preservation of Rocky Mountain National Park and other beautiful places he represents. “A lot of the work that I do is protecting our open spaces back home,” he says. “It’s in our DNA as Coloradans.” This week, he’s launching a new bipartisan caucus with Republican Representative John Curtis of Utah to address the threat of wildfires and introducing legislation to help communities in his district recover from them.

On Valentine’s Day, Neguse would board a plane home for the first time in nearly three weeks—the longest stretch he’d ever gone without seeing his wife and daughter. But while he says he’s “really excited” to get back to his normal life, prosecuting the most high-profile case in the country has now made him somewhat of a household name. His tone shifts abruptly from talking about the beauty of the Rocky Mountains and becomes more somber. “I’m hopeful that folks will remember what happened yesterday, and that we don’t forget,” he says. “Because our country went through a lot. And the most dangerous thing we can do is forget.”

-With reporting by Lissandra Villa/Washington 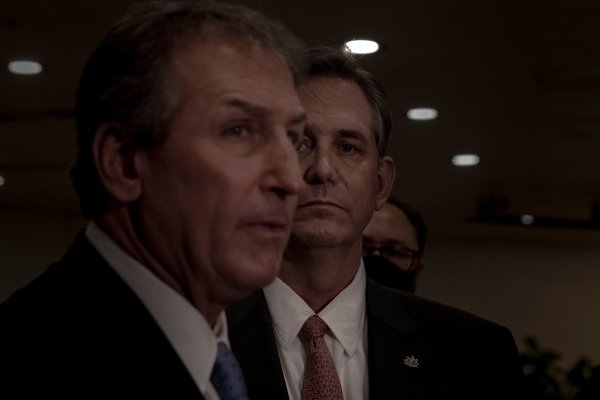 Trump Faces Uncertain Road Despite Acquittal
Next Up: Editor's Pick