The Senate affirmed the constitutionality of holding an impeachment trial for a former president on Tuesday, paving the way for the final showdown over Donald Trump’s extraordinary presidency.

By a vote of 56 to 44, the Senate voted that it has the jurisdiction to try a president once he has left office. The vote came after four hours allotted for debate on the issue and was largely along party lines; six Republicans voted with all Democratic senators that the trial is permissible, foreshadowing a likely acquittal at the trial’s end.

But even if Trump is acquitted, Tuesday’s vote still bolstered a fundamental check on the powers of the presidency for a man who tested that authority in exceptional ways. Trump is now the only president in U.S. history to be impeached twice, and will be the first former president to be tried. It sends a powerful signal about his behavior in office, and the the trial itself offers the Senate an opportunity to air evidence and publicize a record of the events that led to the deadly Capitol riot on Jan. 6, one of the most dramatic assaults on American democracy in a generation. The votes that senators ultimately must cast on Trump’s conduct raise potential political consequences for the future of the Republican Party.

Impeachment is not just about removing an official from office, House impeachment manager Rep. David Cicilline, a Democrat from Rhode Island, argued on Tuesday. “It also ensures accountability for presidents who harm us or our government,” Cicilline said. “In the aftermath of a tragedy, it allows us an opportunity to come together and to heal by working through what happened and reaffirming our constitutional principles.”

Before the Senate could reach that point, it had to first decide whether holding the trial itself violated one of the country’s founding documents. While the question seems like a basic one— can the Senate hold an impeachment trial for a president after he has left office?— at the core of that debate is how best to safeguard the nation’s democracy. Democrats argue only the deterrent threat of impeachment stands between a future president making an authoritarian power grab. Republicans fear the danger of a partisan Congress encroaching on basic constitutional rights and the powers of the executive branch.

Finding trials for former presidents unconstitutional would be an “invitation to the president to take his best shot on anything he may want to do on his way out the door, including using violent means to lock that door,” said lead impeachment manager Rep. Jamie Raskin, a Democrat from Maryland, on the floor on Tuesday.

Being allowed to impeach former officials and endorsing the House’s quick impeachment inquiry— seven days from the Capitol riot to the impeachment vote— by going forward with this trial is “an untenable combination that literally puts the institution of the presidency directly at risk,” said Trump’s attorney David Schoen.

“The political pendulum will shift one day,” warned Trump’s other lawyer Bruce Castor. “This chamber and the chamber across the way will change one day. And partisan impeachments will become commonplace.”

Both arguments about the legitimacy of the trial are largely grounded in the text of the Constitution. The Constitution grants the Senate the “sole power” to try “all” impeachments. Article II, Section 4 of the Constitution says: “The President, Vice President and all civil Officers of the United States, shall be removed from Office on Impeachment for, and Conviction of, Treason, Bribery, or other high Crimes and Misdemeanors.” Article I, Section 3 says there’s an additional punishment the Senate could impose: “Disqualification to hold and enjoy any Office of honor, Trust or Profit under the United States.”

The nebulous connection between those sections forms the basis for both sides of the debate. Those who say holding a trial for a former official is unconstitutional tend to focus on Article II, Section 4, arguing that since removal from office is a constitutionally prescribed punishment, the document assumes the person is still in office when they’re being tried.

“From which office shall a non-president be removed if convicted?” said Schoen. “A non-president doesn’t hold an office, therefore cannot be impeached under this clause, which provides for the removal from office.” Schoen also raised issues with other aspects of the impeachment process, including the way the House conducted its inquiry and the fact that the Chief Justice of the United States is not presiding over the trial.

But House impeachment managers noted that Trump was impeached while in office for conduct committed while in office, and the Constitution gives the Senate the power to try “all” impeachments, including this one. They also find some basis for their position in Article I, Section 3. If the Framers only intended impeachment trials for current officeholders, they wouldn’t have included that additional optional punishment, they claim. Disqualification “obviously applies to both current and former officers,” said House impeachment manager Rep. Joe Neguse, a Democrat from Colorado.

House impeachment managers cited numerous prominent conservative legal scholars who had reached the same conclusion to support their arguments on Tuesday. They also based their position in a previous instance in which the Senate held an impeachment trial for a former government official, and in what they argued was common sense reasoning about not creating a “January exception” to impeachable offenses.

They drove their point home by previewing visceral, emotional arguments about Trump’s conduct, showing a graphic video of the violence on Jan. 6. Raskin began to cry while he talked about the horrors he experienced in the Capitol during the insurrection— a day his daughter had come to work with him, the same week they had buried another of his children who had died by suicide. (“You will not hear any member of the team representing former President Trump say anything but in the strongest possible way denounce the violence of the rioters,” Castor said when he began his remarks after Raskin.)

If there were in effect an exception to committing impeachable offenses in the final weeks of a presidential term, and if “the President incited a violent insurrection on the day Congress met to finalize the presidential election, he would have you believe there was absolutely nothing the Senate could do about it,” Raskin said. “No trial. No facts. He wants you to decide that the Senate is powerless at that point. That can’t be right.”

At the conclusion of debate, a bipartisan majority of senators agreed. Presentations in the second impeachment trial of Trump are set to begin on Wednesday. 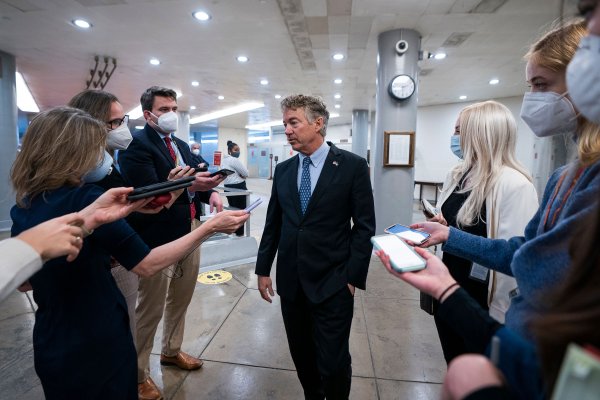