Donald Trump Has Been Acquitted Again. But He Faces an Uncertain Road Ahead

In the silent security video, Republican Senator Mitt Romney of Utah is making his way toward his hideaway office in the United States Capitol. He’s past the Ohio clock, with his back to the Senate chamber as he moves away from the camera, another man a few steps behind him. That’s when Capitol Police Officer Eugene Goodman races down the hallway toward the chamber, directing Romney to head back, away from angry Trump supporters.

On Wednesday, a little more than a month after a pro-Trump mob stormed the Capitol on Jan. 6, Romney watched himself on the screen intently, blinking rapidly but sitting still. That’s how he sat for much of the Senate impeachment trial to consider whether former President Donald Trump incited an insurrection. Like his 99 fellow jurors, Romney weighed the arguments presented by the House impeachment managers and Trump’s defense. And ultimately he voted that Trump was guilty, as he did in the former President’s first impeachment trial.

Romney was joined by six other Republican Senators — Senators Richard Burr, Bill Cassidy, Susan Collins, Lisa Murkowski, Ben Sasse, and Pat Toomey— in voting to convict Trump. But the vast majority of Republicans did not. The Senate voted to acquit President Donald Trump by a vote of 57-43 on Saturday, falling 10 votes short of the threshold necessary to convict and bar him from future office.

By refusing to close the door behind Trump, the former President, along with the toxic brand of politics he espouses, is free to walk right through it again, as he has reportedly hinted he might. The Romneys in the Senate and the Liz Cheneys in the House, who voted for impeachment and want to see their Republican party get out from under the shadow of the 45th President, lost out for now. And while congressional Republicans held that door open for him with their vote, even those who voted to acquit him said his legacy would not be untarnished.

House managers watch the news as they prepare to speak to the press on Feb. 13, 2021.
Gabriella Demczuk for TIME

“This is about preserving the republic, dear Senate,” said Rep. Jamie Raskin of Maryland, the lead Democratic impeachment manager, at one point during the proceedings, almost pleadingly. “That’s what this is about: Setting standards of conduct for the President of the United States so this never happens to us again.”

‘Everybody knows the outcome’

Throughout the impeachment trial, Democrats argued that the events of Jan. 6 were foreseeable after Trump cast doubt for months on the results of the 2020 presidential election. They reconstructed the movements of the mob inside and outside the Capitol building to demonstrate lawmakers’ proximity to danger, and how the riot had put the presidential line of succession in direct threat.

Capitol Hill regulars — survivors of the Jan. 6 attack, many of them United States Senators — relived their own experiences of that day as the impeachment managers walked them and the public through it: the Romney security video, audio of Speaker of the House Nancy Pelosi’s terrified staff calling for help as the pro-Trump mob knocked on a nearby door, a clip showing Senators leaving the Senate chamber, another clip of then-Vice President Mike Pence being evacuated.

The gripping testimony presented by Democrats put the Senate in a spell — even Trump’s lawyers seemed overwhelmed by it — but only momentarily. On Friday, Trump’s defense team pivoted to focus their argument on a First Amendment defense. The House managers had heavily cited the speech Trump gave to supporters the day of the attack on the Capitol, where he told them to “fight like hell.” In an attempt to downplay that rhetoric, the defense made a false-equivalence argument that Democrats’ use of the word “fight” in political rhetoric amounted to the same thing.

The defense lawyers’ presentation was at moments reminiscent of their client’s own bombastic style. “In short, this impeachment has been a complete charade from beginning to end,” said Michael van der Veen, one of Trump’s attorneys, in his closing remarks. “The entire … spectacle has been nothing but the unhinged pursuit of a longstanding political vendetta against Mr. Trump by the opposition party.”

Michael van der Veen and others on Trump's legal team celebrate after the acquittal.
Gabriella Demczuk for TIME

They also argued that it was unconstitutional to try a President who no longer held office, and that Democrats had not thoroughly investigated before rushing to impeach. They overlooked the fact that Trump had been invited to testify at the Senate trial, and declined.

Their defense presentation lasted just under three hours, after which the Senate moved on to a question and answer period. His lawyer said that Trump at no point had been alerted to the danger Pence was in, directly contradicting the public statements of Alabama Senator Tommy Tuberville, who said he relayed to the President that Pence had been evacuated from the Senate chamber in a phone call.

On Friday evening, Rep. Jaime Herrera Beutler released a statement confirming the details of her conversation with House Minority Leader Kevin McCarthy in which he told her he’d spoken to Trump during the attack, pleading with him to call the rioters off. “Well, Kevin, I guess these people are more upset about the election than you are,” Trump allegedly told McCarthy.

‘He can do this again’

From the start, there was clear eagerness on both sides of the aisle to get through this impeachment quickly. Perhaps at no point was that impulse more evident than on Saturday, when the House impeachment team made the surprise announcement from the Senate floor that they wanted to subpoena Herrera Beutler.

A potential fight over witnesses that could have prolonged the Senate trial hung in the balance, and rage erupted on the Senate floor. Wisconsin Sen. Ron Johnson became visibly upset with Romney after the Utah senator voted to call a witness, pointing angrily at him and was heard saying in part, “Blame you.” Ultimately both parties came to a rapid agreement to enter Herrera Beutler’s statement into evidence without further drawing out the process.

By then, it was already clear that no evidence was going to change enough Republican minds to convict. On Tuesday, as the trial started, 44 Republicans had already voted that the entire trial was unconstitutional, rendering it exceedingly unlikely that the House managers would get the 17 Republican votes they needed. “Everybody knows the outcome of this proceeding, which is that President Trump is going to be acquitted,” Texas Sen. Ted Cruz said Saturday, hours before the final vote.

When asked by TIME after the vote how he felt about seven Republican senators voting to convict Trump — six more than in the previous impeachment trial — Trump’s attorney Bruce Castor Jr. said simply: “A win is a win.”

“This has been yet another phase of the greatest witch hunt in the history of our Country,” Trump said in a statement following the vote. “No president has ever gone through anything like it.”

President Donald Trump is the only American President to have been impeached twice, and acquitted twice. That leaves him free to run for political office again, but it does not mean his troubles are over.

At least two state-level investigations of the former President are reportedly underway, one in New York related to his finances, and another in Georgia that became known during the Senate impeachment trial, reportedly related to his efforts to overturn the election.

“President Trump is still liable for everything he did while he was in office, as an ordinary citizen,” said Senate Minority Leader Mitch McConnell, after voting not guilty on Saturday, arguing that the criminal justice system and civil litigation is where Trump will be held accountable. “He didn’t get away with anything yet.”

Impeachment may have also hurt Trump in other ways. As the House impeachment managers established a detailed record of Trump’s actions before and during the riot, they may have diluted his political power with the Republican party, even as so many lawmakers stood by him. Some polling has shown that he lost support in the days after the riot for a potential 2024 run.

“I think he probably is not likely to ever be President of the United States again based on what is going on right here,” Senator Kevin Cramer of North Dakota, who voted to acquit, said on Saturday when asked about the future of Trump in the Republican Party. “The impeachment process has been damaging.”

Still, there’s nothing now stopping him from trying. This may be last time Trump sucks all of the oxygen out of Capitol Hill in such a high-profile way, but he’s not out of the game. Senator Lindsey Graham told Politico on Friday he plans to meet with Trump to encourage him to get involved in the 2022 races. Cramer said even if he may no longer be in the running for the nation’s top job again, Trump will continue to “have as much influence I suspect as he wants.”

For the Democrats who argued for Trump’s conviction, that’s a dangerous prospect.

“The cold, hard truth is that what happened on January 6 can happen again. I fear like many of you do, that the violence we saw on that terrible day may be just the beginning,” said Colorado Rep. Joe Neguse, one of the impeachment managers, on Saturday. “Senators, this cannot be the beginning. It can’t be the new normal. It has to be the end. And that decision is in your hands.”

To many who watched the trial closely, such concerns may not seem quite as far fetched as they did a few weeks ago. And, short of a conviction, convincing people of that might be the biggest win Democrats could have hoped for.

—With reporting by Tessa Berenson/Washington 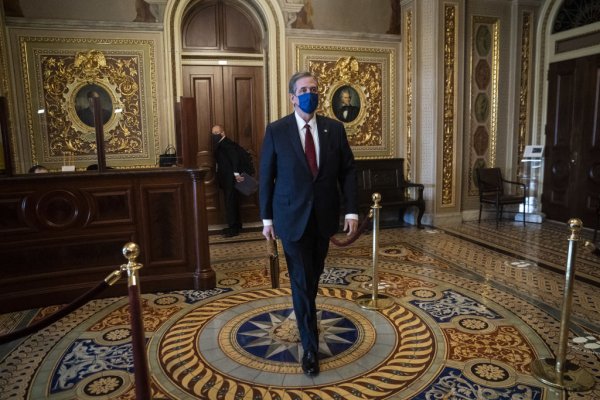