‘It Tears at Your Heart.’ Democrats Make an Emotional Case to Senators — and America — Against Trump

By Lissandra Villa and Tessa Berenson

Here’s what United States Senators saw and heard on Wednesday, as Democratic impeachment managers started to build their case against former President Donald Trump, charged with inciting an insurrection that led a mob to attack the Capitol on Jan. 6.

They heard Speaker of the House Nancy Pelosi’s terrified staff whisper into a phone for help as the members of the mob pounded on doors nearby. They saw security footage of Capitol Hill Police Officer Eugene Goodman running to respond to the breach of the building, on his way directing Senator Mitt Romney away from the mob to safety. They saw a graphic video showing police shoot and kill Ashli Babbitt, one of the rioters who stormed the Capitol, as she attempted to enter the Speaker’s Lobby. They saw Vice President Mike Pence and his family being evacuated to a secure location while rioters roamed the halls searching for him. And they watched themselves, running out of the Senate as officers created a line down the hallway to protect them from the pro-Trump crowd.

“You know how close you came to the mob. Some of you, I understand, could hear them,” said California Rep. Eric Swalwell, one of the House impeachment managers, during arguments. “But most of the public does not know how close these rioters came to you.”

The evidence caused Senators to shake their heads and furrow their brows, sending some of them to the literal edge of their seat as they took it all in. The presentation was taking place in the very chamber that was being ransacked on the screens the House impeachment team used to argue how Trump was ultimately culpable for the attack. The managers’ appeal was both meticulous and emotional; the upsetting video footage of the insurrection came after a painstaking reconstruction of Trump’s statements and actions leading up to the day.

The Democrats’ hours of arguments went out to two audiences on Wednesday. They need to convince at least 17 Republican Senators to join every Democrat in order to convict Trump for inciting the violence, which seems unlikely given that most Republicans voted just yesterday to throw out the trial. But perhaps just as much, the House impeachment managers were speaking to the American people, and creating a public record of a dramatic assault on American democracy as they go.

Lead U.S. House impeachment manager Rep. Jamie Raskin walks to the Senate floor for the start of the impeachment trial at the Capitol in Washington, on Feb. 9, 2021.
Gabriella Demczuk for TIME

One such Republican is Romney of Utah, the lone Republican to vote to convict Trump in his first impeachment trial in 2020. “The great violence that our Capitol Police and others were subjected to, it tears at your heart and brings tears to your eyes,” Romney said Wednesday. “That was overwhelmingly distressing and emotional.” He said it was the first time he’d seen the security footage of Goodman waving him to safety.

Even if convincing 17 Republicans to vote against Trump ends up being a futile exercise, Democrats argue that there’s still real value in showing Americans the facts of Trump’s conduct and actions that precipitated the deadly riot. Lead impeachment manager Rep. Jamie Raskin, a Democrat from Maryland, explicitly called on the public to pay attention to the proceedings. “Every American— young and old and in between— is invited to participate with us, in this essential journey to find the facts, ensure the truth,” he said during his presentation. “Trials are public events in a democracy. And no trial is more public or significant than an impeachment trial.”

And with that audience, Democrats may already be having some success. A flood of recent public opinion polling shows that a majority of Americans believe Trump should be convicted. A CBS poll conducted over the weekend of adults across the U.S. said 56% of Americans think Trump should be convicted. In a Gallup poll conducted over the course of the end of January and the start of February, 52% of Americans said they would like to see their Senators vote to convict. An ABC News/Ipsos poll conducted earlier in February found 56% of American support convicting and barring Trump from future office. And when the House voted to impeach him, 10 Republican lawmakers joined Democrats in voting to impeach, making it the most bipartisan impeachment of a President in American history.

“I think they are very clearly and powerfully arguing to the court of public opinion, which in turn will affect the views of my Republican colleagues,” says Senator Richard Blumenthal, a Democrat from Connecticut. “But even more importantly, Donald Trump will be convicted by history, even if he isn’t convicted by the United States Senate.”

A truck operated by the SuperPAC Meidas Touch shows scenes from the insurrection outside Union Station during the impeachment trial of former president Donald Trump in Washington, on Feb. 10, 2021.
Gabriella Demczuk for TIME

The thrust of the Democrats’ argument is that the bloody insurrection on Jan. 6 was a foreseeable outcome, the direct result of months of Trump baselessly claiming the 2020 election was “rigged,” whipping his supporters into an angry frenzy and exhorting them to “fight” for justice. On their first day of arguments, the House impeachment managers laid out a methodical case in three parts: Trump’s provocation of the attack, his refusal to stop it while it occurred, and the harm that it caused.

They demonstrated their case on how Trump incited his supporters with his “big lie” about election fraud, refused to step in and forcefully condemn or stop the insurrection on Jan. 6, and showed in chilling detail the horrific violence that unfolded that day. “A lie can do incredible damage and destruction, and that’s especially true when that lie is told by the most powerful person on earth,” said impeachment manager Rep. Joaquin Castro, a Democrat from Texas.

Trump’s defense team has signaled it plans to argue that his words were protected by the First Amendment and that he did not incite the crowd to violence that day.

Attorneys for former President Donald Trump, Bruce Castor and David Schoen arrive prior to the start of the impeachment trial at the Capitol in Washington, on Feb. 10, 2021.
Gabriella Demczuk for TIME

“I want to say to the Republicans, ‘How do you live with yourselves after watching all this if you’re not going to convict the guy?'” said Senator Mazie Hirono, a Democrat from Hawaii. “A majority of the public, as far as I know, wants Trump to be convicted. And so that’s part of it. But I think that the completeness of the presentation is one where it’s pretty inescapable, the increasing desperation that Trump had to retain power, which led to this violent takeover and insurrection where five people died and over 100 officers were injured. I don’t see how the Republicans… can even dare to call themselves the law and order party anymore.”

Democrats are not just creating a record for American history in their arguments, they are creating a historical record for a generation of future lawmakers and those sitting in the Senate today. If Trump is acquitted, but Democrats manage to bring an unexpected number of Republicans over as they did in the House, it could deepen the GOP’s existential crisis over its future in the post-Trump era. On Tuesday, five Republican Senators were expected to vote with Democrats that holding an impeachment trial for a former President was, in fact, constitutional; in the end, a sixth, Sen. Bill Cassidy of Louisiana, said he joined them partly on the strength of the Democrats’ opening pitch.

By Wednesday evening, the House managers had already mounted a formidable argument, with up to eight more hours of arguments in front of them on Thursday. And while Republicans say that they also want to listen to the defense team who will present their arguments in the coming days, they have already acknowledged how well prepared House Democrats have been. Said Republican Senator John Thune of South Dakota, “I think they’ve done a good job connecting the dots.”

Write to Lissandra Villa at lissandra.villa@time.com and Tessa Berenson at tessa.berenson@time.com. 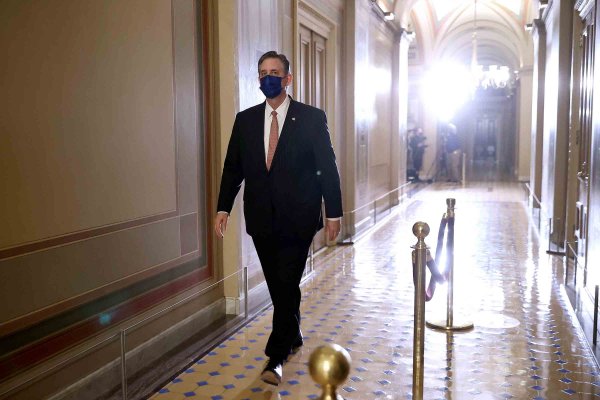 Confused by Trump's Defense? So Were Republican Senators
Next Up: Editor's Pick