How Long Will Joe Biden Pretend Narendra Modi's India Is a Democratic Ally?

“Democracy” is the one word that gets thrown around a lot when India and America talk about their relationship. Democracy forms the basis of the “shared values” and the “common bond” between the “natural partners”—all phrases that invariably pop up in the communiques of their engagement. The “world’s oldest democracy” and the “world’s largest democracy” won’t let the world forget why they’re in it together.

And, so it was when President Joe Biden spoke with Prime Minister Narendra Modi over the phone Feb. 8 for the first time since the new U.S. Administration took power. Only, the new American President seemed to think that it wouldn’t be a bad idea to remind India of the two nations’ common bond, as well. “The President underscored his desire to defend democratic institutions and norms around the world and noted that a shared commitment to democratic values is the bedrock for the US-India relationship,” said a White House statement on the meeting.

The U.S. would like to see India as an ideological and strategic counter to China’s rise, but it is becoming increasingly difficult to overlook India’s fast-declining democratic standards. The daily assaults on civil liberties and the threats to India’s Muslim minority under Modi’s Hindu nationalist Bharatiya Janata Party (BJP) have noticeably increased since Modi’s re-election in 2019. Hate speech is rife, peaceful dissent is criminalized, freedom of expression and association faces new constraints, and the jails are filling up with political prisoners and peaceful dissenters as a servile judiciary looks away.

On Sunday, Disha Ravi, a 21-year-old climate activist, was arrested for the allegedly seditious act of sharing and editing a Google document for activists supporting the ongoing farmers’ protest. Warrants are out against more activists for the same “conspiracy.” Earlier this month, India slipped two more places to 53rd in the Economist Intelligence Unit’s Democracy Index—from 27th place in 2014. Sweden’s V-Dem Institute now lists India among the top 10 countries most quickly becoming autocracies, adding that it is “on the verge of losing its status as a democracy due to the severely shrinking of space for the media, civil society and the opposition.”

Read more: COLUMN – The Farmers’ Protests Are a Turning Point for India’s Democracy

The strongman style of Modi, who likes to boast of his broad “56-inch chest,” has started attracting greater international attention as a result of his handling of the farmers’ protest. The farmers have been massing on the outskirts of capital New Delhi for months, demanding a rollback of new laws aimed at encouraging corporate role in agriculture. Modi’s government has refused to accede to the demand, and tried to defame and demonize the protesters as terrorists.

When international celebrities such as Rihanna, Greta Thunberg, Susan Sarandon and Vice President Kamala Harris’ niece Meena Harris lent their voices to the farmers’ cause, India’s government seemed to take a page from China’s book, going full “wolf-warrior” with a foreign ministry-led hashtag firestorm aimed at “vested interest groups” and “foreign collaborators.” Some of the vilest troll attacks, a signature technique of the BJP to gag and discredit critics, have been directed at Harris, who highlighted the arrest and alleged sexual assault of a 23-year-old trade unionist.

In all, a nightmare for Biden, who takes the helm at a time when China is consolidating its global power and influence while the domestic mood in the U.S. remains decidedly focused inward. He is expected to rebuild American capacity at home, even as U.S. geopolitical interests require more attention than ever before. Biden’s golden balance is a global coalition of democracies to collectively take on China.

On the campaign trail, Biden had promised to convene a “Summit for Democracy” to “renew the spirit and shared purpose of the nations of the Free World.” In office, he is pushing in the same direction. The Quad, a strategic forum of four Indo-Pacific democracies—the U.S., Japan, Australia and India—featured prominently in the White House statement on the conversation with Modi.

But for America’s new principled alliance of democracies against China to work, the constituents of the coalition need to be, well, democratic. Pressing China on human rights while ignoring gross violations by allies is not a good look for the new Leader of the Free World, especially one who projects himself as the moral opposite of his blatantly transactional predecessor. This is where the Modi government’s increasingly undisguised tyranny becomes a Biden problem.

The market-friendly, right-wing BJP had always been a good bet for American interests in India’s once predominantly left/centre-left political milieu that was hostile to liberal market reforms and any strong association with the U.S. Modi’s rise to national power in 2014, signaling the country and the party’s move further right, opened fresh pathways to increase American influence in India. It came with its own set of complications, but both sides did well to manage them. Much was made of Modi and Barack Obama’s “bromance,” but the embrace was an uneasy one. The very public display of affection of hugs and hand-holdings only served to hide underlying tensions.

On his first trip to the U.S., Obama pointedly took Modi on a tour of the Martin Luther King Memorial. Later, he wrote in TIME: “Narendra and I visited the memorial to Dr. Martin Luther King Jr. We reflected on the teachings of King and Gandhi and how the diversity of backgrounds and faiths in our countries is a strength we have to protect.” The subtext was hard to miss. During his tenure, Obama also urged India to uphold religious freedoms and lamented that Gandhi would have been shocked by the acts of religious intolerance that India was witnessing.

In Modi, the U.S. had an Indian leader prepared to “overcome the hesitations of history”—as the prime minister put it at a 2016 joint session of U.S. lawmakers—and bandwagon with the world’s only superpower. Still, it was never going to be easy for the U.S. to fully embrace a leader whose visa it had denied for a decade for his alleged role in a pogrom of Muslims – a ban Obama lifted only when it became clear that Modi was coming to power.

But Donald Trump had no such ideological dilemmas. Hindu supremacism found a natural ally in white supremacism. As Modi returned to power with a thumping majority in 2019 and implemented his hard-line agenda with a series of steps, such as dismembering India’s only Muslim-majority state, Jammu and Kashmir, and introducing a citizenship law that discriminates against Muslims, the Trump Administration barely made any noise. On his trip to New Delhi, even as the city burned in days-long religious riots instigated by BJP leaders, Trump did not utter a word.

Read more: COLUMN – Can the World’s Largest Democracy Endure Another Five Years of a Modi Government?

Biden can’t afford that kind of silence. He takes the presidency at a time when the attacks on civil liberties in India have increased manifold, as has the global awareness of them. A Muslim man in India can now be jailed for marrying a Hindu woman. A Muslim boy can be jailed for walking a Hindu girl home. A Muslim comedian can be jailed for a joke not made. A Muslim actor can face criminal charges for playing a character who mouths lines that “offend Hindu sentiments.” A Muslim journalist can be jailed for simply doing his job. A Muslim cricket coach can be forced out of his job at a state team for praying.

If Biden’s domestic constituency expects him to ensure racial justice and repudiate white supremacy at home, he will find it hard to justify pandering to other kinds of supremacists abroad. If upholding democratic institutions, ravaged by the Trump years, is a priority at home, ignoring the abuse of governing institutions elsewhere opens him up to charges of double standards.

In their phone conversation, Modi and Biden, for example, “resolved that the rule of law and the democratic process must be upheld in Burma.” Diplomatic platitudes like these are almost laughable given the collapse of India’s own democratic credentials. Incidentally, both Myanmar and India have responded to protests the same way—by restricting the internet. India leads the world in internet shutdowns, followed by Myanmar.

India-U.S. relations have come a long way from the Cold War days, when India was a firm Soviet camp follower and deeply suspicious of American motives in the region while the U.S. was committed to Pakistan and pursuing China. “By 1971,” Henry Kissinger wrote in White House Years, “our relations with India had achieved a state of exasperatedly strained cordiality, like a couple that can neither separate nor get along.”

Much has changed since. The geopolitics of the region has been turned on its head. Indian and American interests have never been more aligned, defense and commercial ties never any stronger. After decades of balancing between China and the U.S., India has picked its side, and gone all in with a distant ally to hedge against its near foe. The U.S., for its part, finds in Modi a dependable ally. Strained cordiality has given way to a newfound intimacy.

But if Modi’s India doesn’t find a way to reverse its democratic decline, the couple will find themselves in much the same limbo of the Kissinger years—neither separate, because of the China compulsion—nor able to get along. 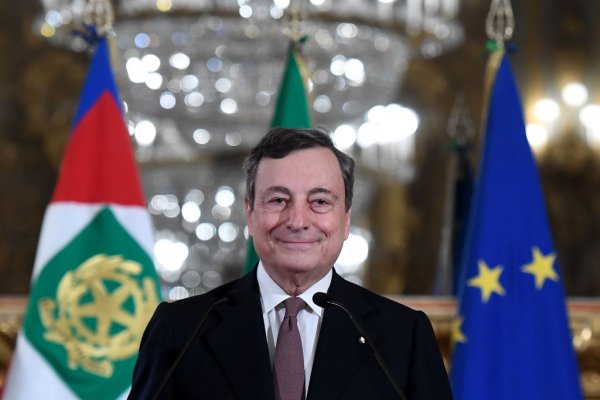 What Happens Next in Italy with Mario Draghi Taking Charge
Next Up: Editor's Pick