Farmers shout slogans as they participate in a protest at the Delhi Singhu border in Delhi, India on Dec. 18, 2020.
Anindito Mukherjee—Getty Images
Ideas
By Simran Jeet Singh
Singh is a scholar and historian of South Asia. He is an Equality Fellow for the Open Society Foundations, a Council on Foreign Relations term member, and a Truman National Security Project fellow.

For decades, the world has turned a blind eye to India’s abysmal human rights record. This approach draws from a broad perception of India as a strategic ally.

For one, the United States, like much of the global community, sees India as an important counterweight to China. They are the two most populous nations and the fastest growing trillion-dollar economies in the world. Global powers tend to prefer India because of its standing as the world’s largest democracy. At the same time, India’s adversarial relationship with neighboring Pakistan, as well as its increasingly anti-Muslim policies, position it as a bulwark against “Islamic terrorism.”

These two bogeymen—Chinese imperialism and Islamic terrorism—are the specters that have given India a free pass.

Over the past few years, however, the rise of right-wing authoritarianism has brought India’s democratic standing into question. India has plummeted in democracy metrics across the board, including the Press Freedom Index, where it now ranks 142 of 180 countries, four spots behind South Sudan and three behind Myanmar. The Human Freedom Index ranks India at 111 of 162 countries, just four ahead of Russia. This past September human rights group Amnesty International ceased operations in India following sustained assaults from the Indian government.

Farmers take part in a rally as they continue to protest against the central government's recent agricultural reforms, in New Delhi on Jan. 26, 2021.
Sajjad Hussain— AFP/Getty Images

The full force and authoritarian tactics of the Indian government have been showcased as they respond to the largest protest in their history. Since September, tens of thousands of Indian have gathered in New Delhi to protest three new agricultural laws that aim to deregulate India’s agricultural industry and open it up to free-market forces. While the need for reforms is urgent, farmers are concerned that the new legislation privileges corporations and harms the everyday farmer. Finally, on Feb. 2, after months of protests, the world’s eyes started to focus on the Indian government’s undemocratic measures, including press censorship, journalist detention, internet shutdowns, and violent crackdowns against the non-violent protestors.

Hindu nationalists have used the occasion to call for genocidal violence against protestors. Twitter removed a tweet from Indian actress Kangana Ranaut that advocated ethnic cleansing of the protestors. Twitter also suspended 500 accounts that called for a repeat of the 1984 pogroms, a dark moment in India’s history.

These calls refer to a period of Indian history reminiscent of what’s happening today. In the 1970s and 1980s, Punjabi Sikhs led similar agitations that called for better government support of agriculture. Their sustained protests along with a self-determination movement drew the ire of the Indian government, which painted the efforts as anti-national. Following a disinformation campaign, the government launched a series of attacks that resulted in mass atrocities and egregious human rights abuses: the military assault on Darbar Sahib (Golden Temple) of Amritsar in June of 1984, the state-sponsored pogroms in November of 1984 following the assassination of Prime Minister Indira Gandhi by two of her Sikh bodyguards, and, in the decade that followed, a campaign of extra-judicial killings that resulted in tens of thousands of civilian deaths. The government of India has never acknowledged or apologized for this spree of violence, and it remains a visceral memory for many Indians, especially Punjabi Sikhs today.

Understanding the state violence in Punjab during the 1980s helps us see the grievances that Punjabi farmers have with the central government. It also shows how the Indian state deploys and enacts violence against its own citizens, and, perhaps most crucially, anticipates what might happen in India today if the Indian government is not held accountable for its current undemocratic actions.

Senior army officers at the site of a military operation ordered by Then-Prime Minister Indira Gandhi, to remove Sikh separatists in the Golden Temple in Amritsar, India, in 1984.
The India Today Group/Getty Images

Those who have been paying attention to Indian politics in recent decades will not be surprised at all. The Prime Minister of India—Mr. Narendra Modi—is also the figurehead of right-wing Hindu nationalism. Notoriously, in 2002, Mr. Modi presided over the anti-Muslim pogroms in Gujarat as the state’s Chief Minister. For his role in the genocidal violence foreign nations banned “The Butcher of Gujarat” from entering their countries, including the United States and the United Kingdom. The U.S. ban was in effect for over a decade and only rescinded when it was painfully clear that Modi would be India’s next prime minister.

Since becoming India’s Prime Minister in 2014, Modi’s government has faced a barrage of criticism from human rights groups, foreign nations, Indian civil society, and opposition political parties for its treatment of minority communities. Most recently, India revoked Kashmir’s constitutional autonomy in 2019—a takeover of disputed territory in contravention to United Nations’ agreement—and oversaw extreme human rights abuses in Muslim-majority areas of Kashmir, including illegal detention, abuse, and torture. Add to these internet shutdowns, limitations on freedom of speech and movement, as well as access to information, education, and healthcare.

As with Punjab in the 1970s and 1980s, the government painted any and all dissenters as anti-national—and then persecuted them accordingly. The government took a similar approach of combining disinformation and violence in late 2019 and early 2020 when tens of thousands of Indians took to the streets to protest the Citizenship Amendment Act that critics says discriminates against Muslims who seek Indian citizenship.

Again today, Modi’s right-wing government has responded to the farmers’ protests by lying about and defaming its own citizens. Senior leaders have called the protestors “anti-nationals” and “goons.” International commentators, too, have not been spared. When global icons Rihanna and Greta Thunberg called for greater international scrutiny on Indian authoritarian tactics being used against the protestors, the Ministry of External Affairs described their tweets as “neither accurate nor responsible” and closed its statement press statement with the hashtag #IndiaAgainstPropaganda. The Delhi Police even filed a First Information Report (FIR) and launched an investigation into the toolkit linked to Thunberg’s tweet.

India is coupling government propaganda with the chilling of free speech. Recently they jailed nine journalists who reported that police officers shot and killed a protestor. Their actions, which violated international human rights conventions, prompted the Committee to Protect Journalists to issue a statement. In the words of Ken Roth, Executive Director for Human Rights Watch, “The Indian authorities’ response to protests by farmers has focused on discrediting peaceful protestors, harassing critics of the government, and now prosecuting journalists who are reporting on the protests and recent Delhi violence.”

Farmers gather next to their tractors as police stand guard at a roadblock, to stop them from marching to New Delhi to protest against the central government's agricultural reforms, in Ghazipur, India, on Dec. 1, 2020.
Sajjad Hussain— AFP/Getty Images

This time, however, Indian masses and global observers are not falling for Modi’s lies. They see that this movement is not about ethno-nationalism; rather it arises in opposition to it. It is a movement rooted in Punjabi Sikh experiences and now supported by people all across India who are tired of seeing their country and their communities ravaged by economic despair and social division. It is a movement that cuts across lines of identity—caste, class, region, political affiliation, and religion. And it is a movement led by a community with a history of being traumatized—first in 1947 during Partition and again in 1984—that knows what might be around the corner if the Indian state is not held accountable.

For those who right-wing extremists have continually disenfranchised and persecuted in India—including farmers, Christians, Dalits, Muslims, Sikhs, Kashmiris, and many others—the fears about where the current roads may lead are not based on conjecture or hypothesis. They are drawing from their lived experience—and they know that this is a fight for survival.

But this is not just India’s fight. In a world grappling with rising authoritarianism, propaganda, human rights abuses, and anti-democratic practices, quashing right-wing nationalism is in everyone’s best interest. Letting it go unchecked, especially in the world’s largest democracy, puts us all at risk. It seems like India as our strategic ally is changing before our eyes. We’re at risk of losing our ally because an authoritarian nation cannot be an ally in the same way as an open democratic society. With more than 1.3 billion people in India, we’re talking about a country that is muzzling and restricting basic freedoms for a full one-sixth of the global population. 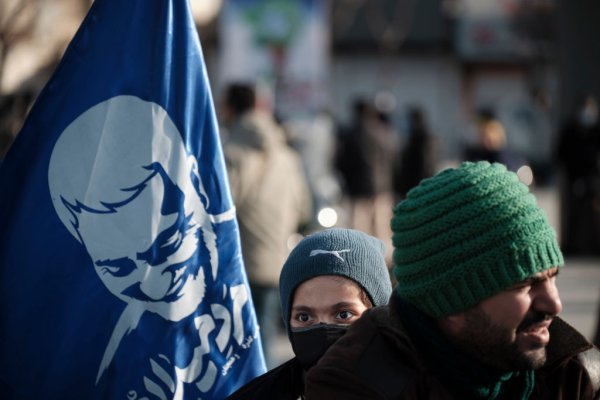 Iran's Revolutionary Guard Is Radicalizing Young Men Across the Middle East. The U.S. Needs a Counterinsurgency Strategy
Next Up: Editor's Pick