There’s a jarringly meta moment in the second episode of Amend: The Fight for America, a Netflix docuseries that draws out the broad, citizenship-granting significance of the 14th Amendment to the U.S. Constitution. Larry Wilmore (an executive producer and one of many famous faces) is breaking down the Supreme Court’s disastrous 1896 Plessy v. Ferguson decision, which upheld state-sponsored racial segregation by establishing the “separate but equal” standard, when suddenly his attention jumps into the present. “Black Americans were separated so much that we still have to have a separate Black History Month, just so Americans can know our contributions,” the comedian and producer says, chuckling ruefully. “It’s so wrong!”

At first, the comparison seems glib—an easy way, perhaps, to underline the relevance of a program whose Feb. 17 debut comes smack in the middle of Black History Month. But in 2021, the connection Wilmore makes between “separate but equal” and the scant four weeks our country devotes each year to celebrating African-American culture, turns out to be quite apt. For many of us raised in the decades between the Civil Rights Movement and the 2010s, which found a reinvigorated movement for Black lives threatened by a horrifying surge in white supremacist violence, Black History Month—with its annual repetition of Martin Luther King, Jr.’s “I Have a Dream” speech and the gentlest Langston Hughes poems—can feel like yet another example of safe, all-representation-no-action liberalism. Yet amid extreme political polarization, as a new generation of Black scholars complicates pat lesson plans and right-wing reactionaries pick at centuries-old societal wounds, the teaching of Black history has again become a genuine flashpoint. And so the many nonfiction TV programs premiering this February that not only foreground the Black American experience, but are filtered through Black creators’ perspectives, feel especially vital.

The New York Times’ 1619 Project has been at the center of this controversy since its launch in August 2019. Spearheaded by Nikole Hannah-Jones, the multimedia initiative features a raft of Black journalists, artists and historians in what the paper has called an attempt “to reframe the country’s history by placing the consequences of slavery and the contributions of Black Americans at the very center of our national narrative.” The project also includes educational materials developed with the Pulitzer Center. After a year of grumbling from the right over what it dismissed as woke propaganda, Donald Trump in September announced the formation of a “1776 Commission” to support “patriotic education,” attacking critical race theory and particularly the 1619 Project as “toxic propaganda, ideological poison, that, if not removed… will destroy our country.” Republicans in Arkansas, Iowa, Mississippi, Missouri and South Dakota kicked off 2021 by introducing legislation to defund public schools and colleges that teach the 1619 Project. (South Dakota lawmakers have since withdrawn their bill.)

It isn’t just an old right-wing grudge against a favorite media target that’s driving this backlash, either. Beyond the 1619 Project, a Tennessee middle school principal recently announced a slate of Black History Month programming with the theme “All Lives Matter.” Universities including Rutgers and Penn State have been rocked by reports of racist “Zoom bombings” at virtual Black History Month events. In Indiana, a superintendent warned teachers against “advancing the cause of Black Lives Matter,” in a letter citing parents who “contend that their children are being indoctrinated rather than taught and that this effort has been a distraction from the academic purpose of school.” (Both administrators eventually apologized.) And in Utah, a Montessori school briefly offered families the choice to opt out of this year’s Black History Month curriculum altogether. The chilling implication is that teaching even the most anodyne version of Black history—or simply reaffirming, in the classroom or through extracurricular events, that the lives of Black students matter—should be seen as the perpetuation of propaganda.

The current outpouring of Black creativity that Ibram X. Kendi calls the Black Renaissance has, among many other achievements, served to counterbalance the racist nightmare playing out in the political sphere. This is especially true when it comes to education. As those working to water down Black History Month or marginalize it into irrelevance keep making headlines, a new crop of nonfiction books, films and TV shows—alongside a fresh wave of fictional portrayals of Black history—made by Black creators have helped to center Black viewpoints beyond academia.

Although such projects are by no means exclusive to February, this month brings three especially thoughtful and well-made docuseries about Black culture in America: Amend, PBS’s The Black Church: This Is Our Story, This Is Our Song, and Hip Hop Uncovered on FX. The differences between these shows can’t be overstated, in terms of both style and subject matter; overlap between their audiences might well be minimal. What they have in common, instead, are the Black directors, producers and on-camera talent at their helms—and, not coincidentally, a disinclination to sugarcoat the devastating effects of systemic racism to appease white viewers.

The Harvard professor and public intellectual Henry Louis Gates, Jr. serves as executive producer, writer and host of The Black Church, airing on Feb. 16 and 17, which traces Black spiritual life all the way back to Africa, through slavery and civil rights, into the present. Early in the four-hour miniseries, Rev. Al Sharpton calls the church the “epicenter of Black life”—and Gates’ deeply researched retrospective goes a long way towards supporting that thesis. He explores the central role the church played in Emancipation, Black politics from Reconstruction to Dr. King to Barack Obama, and a cross-pollinating American musical tradition that took root in Sunday church services (if you don’t know about Sister Rosetta Tharpe, one of the first great rock ‘n’ roll guitarists, you’ll find out enough here to send you down a YouTube rabbit hole). Though Gates is a Christian, he acknowledges that Islam has also played a central role in the African-American community. And he’s not afraid to be critical, in segments that lament how socially conservative congregations have alienated LGBTQ community members and how religious infrastructures created by Black men have barred Black women from positions of power. Despite its traditional style, the series distinguishes itself through Gates’ candid interactions with interviewees who range from scholars and theologians to celebrities like Oprah and John Legend. He harmonizes with gospel singers, calls back to preachers and delves into his own faith. The Black Church is the kind of documentary that only someone with a personal connection to the material could make.

Slicker and more star-studded than its PBS counterpart, the six-episode Amend seems bent on punching up the stuff of American history textbooks, in an effort that isn’t diminished much by its utter conspicuousness. Along with Wilmore explaining high-level concepts and his fellow executive producer Will Smith playing the gregarious host, the series enlists a parade of beloved actors—Mahershala Ali, Samira Wiley, Randall Park, Diane Lane, Pedro Pascal—to declaim some of American history’s most famous speeches and writings. Gimmicky as that might sound on paper, directors Kenny Leon (a theater veteran who brought productions of American Son and A Raisin in the Sun to TV) and Reinaldo Marcus Green (Top Boy, Of Monsters and Men) use their talented cast to elevate primary source documents into dramatic monologues. And beneath all that polish is substance. Leon and Green succeed at spotlighting under-praised heroes (there’s an especially strong section on Ida B. Wells), while making room for related struggles from feminism to LGBTQ rights to immigration and declining to dumb down the insightful analysis provided by some of our most engaging activists, academics and legal minds.

It might seem strange to draw a parallel between the latter two docs and Hip Hop Uncovered (airing Friday nights on FX, with episodes available on Hulu the next day), which chronicles the symbiotic relationship between the upper echelons of hip hop and street culture by profiling a handful of figures who’ve worked behind the scenes to bridge those worlds. Trick Trick, Deb Antney, her brother Bimmy, Haitian Jack, executive producer Eugene “Big U” Henley—these are controversial figures, to say the least. But they’ve also served as gatekeepers in music scenes across the country, mentoring, managing, producing, bankrolling, inspiring and, inevitably, beefing with rising stars from Nicki Minaj to the Fugees to the late Nipsey Hussle. And their ambivalent roles within the industry speak to a mainstream American culture that celebrates the music of Black urban life while condemning, disenfranchising and jailing, if not killing, its participants. Along with amassing a collection of wild, well-told stories that speak to the level of trust he was able to establish with his subjects, director Rashidi Natara Harper highlights the structural factors that kept these kingmakers from prospering in the straight world: racism, deindustrialization, poverty, drugs, mass incarceration. If The Black Church and Amend explore centuries of oppression, then Uncovered surveys its effects—both the great art and the profound human suffering.

None of these series is perfect. Uncovered meanders, latching on for too long to a boring lament about younger rappers’ social media presences. Its portrayals of conflicts between the subjects and their superstar protégés can come across as self-serving or one-sided. Amend’s glossy veneer sometimes gives the impression of a commercial for the 14th Amendment more than an investigation into it. Smith’s attempts to present facts in a casual, colloquial manner occasionally come off as corny. The Black Church can lean too heavily on the public-television stylistic clichés of Ken Burns, and it doesn’t have much to say about figures like James Baldwin, who came up in the Black church but ultimately rejected religion.

That’s history, though: subjective, contradictory, almost always necessarily incomplete. Which is why it’s so important that we hear our national foundation myths told from as many viewpoints as possible—and why the many attempts to undermine the teaching of Black history and discredit revisionist efforts such as the canon wars of the late 20th century, the establishment of Africana Studies departments at universities and now the 1619 Project, have rung so hollow. Expanding the range of experiences students learn about in school can only be a good thing. The backlash to Black history as interpreted by Black Americans doesn’t really represent a fear of indoctrinating kids with lies; it represents a fear of exposing them to complicated truths. If the turmoil of the past decade has taught us anything, it’s that we need more perspectives, and we need them now. 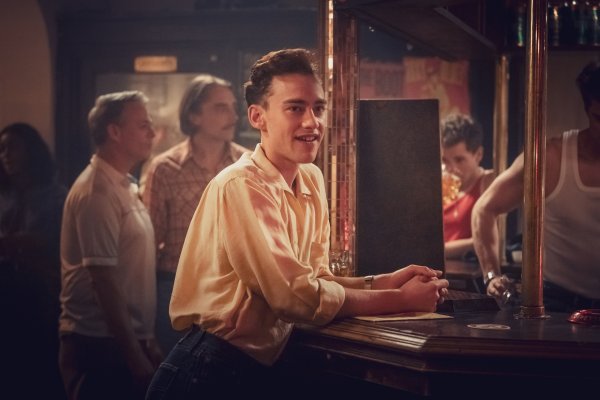 How 'It's a Sin' Explores the History of the AIDS Crisis
Next Up: Editor's Pick