'He Had Transformed': What It Was Like to Watch Martin Luther King Jr. Give the 'I Have a Dream' Speech

Tuesday marks 55 years since the Rev. Martin Luther King Jr. delivered his iconic “I Have a Dream” speech to the crowd that had gathered around the Lincoln Memorial for the Aug. 28, 1963, March on Washington.

While planning for the event had been going on for years before that day, and copies of the speech drafts and notes show that King had been working on what to say for weeks, many may not realize that the most famous lines were not planned at all.

Some credit goes to the gospel singer Mahalia Jackson, King’s former legal counsel Clarence B. Jones, 87, tells TIME. She was one of his most trusted advisors — and an informal therapist of sorts, as Jones frames it. “When he would get very down and depressed, he would ask his secretary Dora McDonald to get Mahalia on the phone,” he says. “He would lean back, close his eyes, and tears would run down his face as she would sing to him.”

So it’s not a surprise that after she performed “How I Got Over” and “I’ve Been ‘Buked and I’ve Been Scorned” at the march, she stuck close by through what would turn out to be one of his most important speeches.

“What most people don’t know is that she shouted to him as he was speaking, ‘Martin! Tell them about the dream! Martin, tell them about the dream!’ I was there. I saw it with my own eyes. I was not on the stage, Dr. King’s back was to me as he was speaking, but I could hear and see him,” Jones tells TIME. “He took the written text that he had been reading from and moved it to the left side of the lectern, grabbed both hands of the lectern, and looked out to the thousands of people out there, and that’s when he started speaking extemporaneously. When Baptist preachers get particularly moved, many of them have a habit of taking their right foot as they’re standing and rubbing it up and down the lower part of their left leg. I saw Martin start to rub his right foot on the lower part of his left leg, and I said to someone who was standing next to me, ‘These people out there, they don’t know it, but they’re about ready to go to church.'”

The day unleashed a side of King that Jones had never seen before.

It wasn’t the precise wording that was new. King had even used the phrase “I Have a Dream,” just a couple months earlier in Detroit at a rally for freedom that Reverend C.L. Franklin, Aretha Franklin’s father, helped organize, and “it did not evoke any kind of special response,” says Jones, who went on to write the book Behind the Dream: The Making of the Speech that Transformed a Nation.

“I had seen Dr. King speak many times in churches throughout the country, but [at the March on Washington] there was something kind of mystical. He had transformed. Oh my God, something had taken over his body. It was spell-binding,” Jones says. “The speech was, in its content, not a profound analysis or commentary, but it’s the way he spoke and the intensity of how he felt.”

Jones believes that intensity came from the challenge of asking America to live up to its ideals just four months after the nation had been confronted with horrifying photographs and television footage of African-American adults and children being faced down with police dogs and fire hoses in Birmingham, Ala.

“I think [the speech] was giving an answer to a rhetorical question addressed collectively to the nation. That question is: what kind of country are we? The speech was a call to the soul of America. It was a call to the moral conscience of America. The powerful use of the phrase ‘I have a dream’ was a summons to the conscience of America,” Jones says. “One of the things King knew at that time is that no matter how compelling the case was on its merits for ending racial segregation, there was no way in hell that African Americans would be able to impose that point of view on the white American majority. The only way it was going to happen is when we got the majority of white people to understand that it was in [their] self-interest that this practice of racial segregation end. That we can be better than we are.”

Today, Jones says, “unsolved” racial equality issues and income inequality mean that the theme of America not living up to its ideals is more relevant than ever. Jones, who lives in Palo Alto, Calif., says he sees that fact regularly in his everyday life: “I’m out here in Silicon Valley — how is it that there are homeless people sleeping on the streets in San Francisco?”

But, he also says, the solution to that problem is something all Americans can help with.

“At the end of the day, if you want to implement Martin King’s dream, if you’re eligible to vote, you have to register to vote, and you have to vote,” he says. “If you want to implement his dreams, you can only do that from power, and power doesn’t come from speeches. Power comes from voting. Anyone who wants to honor Martin’s legacy tomorrow, that’s the best way to pay tribute to his dream.” 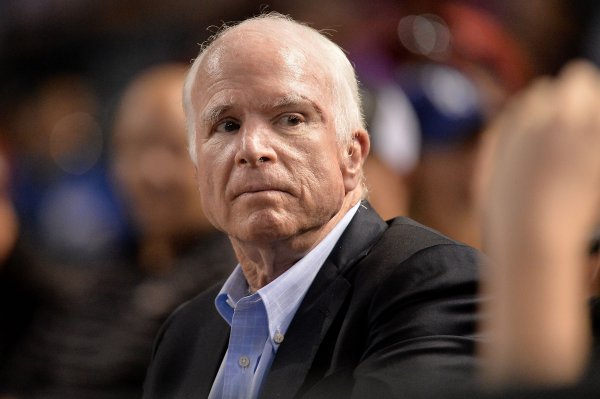 The Reason Trump Won't Be at McCain's Funeral Is Unusual. But He's Not the First President to Skip a Significant Memorial
Next Up: Editor's Pick