MLK, Civil Rights and The Fierce Urgency of Now

What’s in a moment?

At the 1963 March on Washington and elsewhere, Martin Luther King, Jr spoke of “the fierce urgency of now,” the need for immediate, “vigorous and positive action” on civil rights. Princeton historian Julian Zelizer has borrowed King’s words for the title of his new book to re-examine the Lyndon Johnson presidency, the power of Congress, and the birth, and fate, of the Great Society.

On a recent Thursday evening Zelizer and Jonathan Alter (the two are a kind of Simon and Garfunkel of modern politics) engaged in wide ranging discussion of civil rights, grass roots activism, and the nature of leadership, past and present. It was a moment for moments, exploring larger historiographical questions about how we mark and measure progress, how insights into one era help us make sense of our own.

In The Fierce Urgency of Now, Zelizer recounts the astonishing achievements of a brief three-year window, 1963-1966: the passage of the Civil Rights and Voting Rights Acts, Medicare and Medicaid, the War on Poverty, national investments in education and infrastructure, and a series of groundbreaking environmental and consumer protection laws. Challenging what has become, a half century later, received wisdom about the Great Society, Zelizer shifts the lens from Johnson to the Congress to explode what he calls two “myths”: that much of the country and the federal government had become, ineluctably, liberal, and that LBJ’s famous “Treatment” – the force of his personality – willed legislation into being.

“Johnson deserves his share of the credit,” Zelizer contends, “but less for being an especially skilled politician who could steamroll a recalcitrant Congress than for taking advantage of extremely good legislative conditions when they emerged.” By 1966, deteriorating conditions in many American cities, the resurgence of a strong conservative coalition, mounting concern over Vietnam on the left and right, and sweeping losses for the Democrats in the midterm elections, meant Johnson’s window was shut. At that point, notes Zelizer, “all the Treatment and parliamentary tricks in the world had little practical effect on Congress.”

This thesis, supported in large measure by transcripts of oval office audiotapes, counters the more “Johnson-centric” and great man view of history. By implication, it also takes on the work of the “great man” historian who has helped shaped this narrative. Robert Caro’s exhaustively researched and highly decorated volumes on Johnson – in particular the Pulitzer Prize winning Master of the Senate – have become a kind of gospel of LBJ’s legislative prowess and potency. As President, “Johnson knew the limits of his skill,” Zelizer told the group assembled at New America NYC. “Johnson used to say, ‘I’m not a Master of a damn thing. The only power that I’ve got is nuclear, and I can’t use that.’”

The role of historical revision was more than subtext in the evening’s discussion. Alter, a defining historian of Presidents Franklin D. Roosevelt and Barack Obama, has explained of the craft, “writing contemporary history is tricky, like pulling pottery out of the kiln before the glaze has hardened.” In The Promise, his chronicle of Obama’s first year in office, Alter also writes of the importance of multiple drafts and subsequent “versions” of history. Accordingly, he probed how Zelizer’s version of the “battle” for the Great Society enriches our understanding of that moment, and illuminates issues of governance and leadership more broadly. Which raised, inexorably, the Obama comparisons. When asked by an audience member about the prospect of any American president ever achieving that kind of ’63-’66 legislative run, Zelizer replied, “we will need a different Congress to get a great society, not just a different president.” We may still be too close to our subject to conclude how Presidential temperament does – or does not – influence legislative outcomes. But it is useful to remember, as Zelizer noted, that some of the elements of our current political morass – large and consequential mid-term swings, a dysfunctional Congress – are not without precedent.

The publication of The Fierce Urgency of Now coincides with the release of Selma, Director Ava DuVernay’s new film about the marches for voting rights in 1965. The movie portrays how activists persisted in the face of brutal attacks from Alabama State troopers and local police, drawing the national attention to the moment and movement necessary to pass the Voting Rights Act. Members of the Johnson Administration and others have suggested that the filmmakers unfairly depict the President as hostile to voting rights. Zelizer supports this critique, and notes that Johnson, shortly after his election, instructed Deputy Attorney General Nicholas Katzenbach and others to craft the framework and deal for a voting rights bill, both in place before Selma. Where LBJ disagreed with King, Zelizer suggests, was on timing. “Johnson was committed to voting rights,” Zelizer says. But “he was scared of the limits of his power… He was worried if he sent the Voting Rights bill so soon after the Civil Rights bill” he would lose the political support of moderate Democrats and others, and jeopardize other legislative priorities like Medicare and education.

“This is the fierce urgency of now debate,” Zelizer argues. “The movement, the protests, were critical in getting the bill out now rather than later.” According to Zelizer, the Selma film is “really exceptional in capturing the bravery and the courage of the movement, showing how the movement was moving the issue… This is a stunning portrayal of one of the themes of the book: the way that average people mobilize to change Washington.” In our current struggles for civil rights, and the need to shape movement from moment, there is no lesson more hopeful – or urgent.

Georgia Levenson Keohane is a Senior Fellow at New America and Director of the Program on Profits and Purpose, a new initiative that explores ways in which social entrepreneurship, innovation and finance can address some of our most pressing social and economic challenges. This piece was originally published in New America’s digital magazine, The Weekly Wonk. Sign up to get it delivered to your inbox each Thursday here, and follow @New America on Twitter. 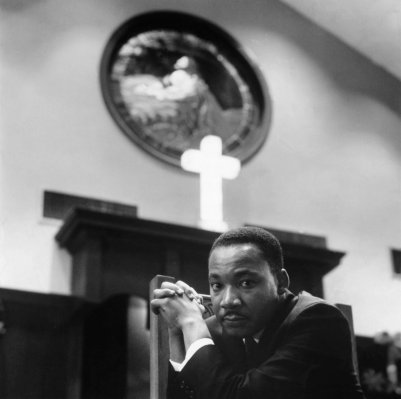 Growing Up in Atlanta, Every Day Was MLK Day
Next Up: Editor's Pick